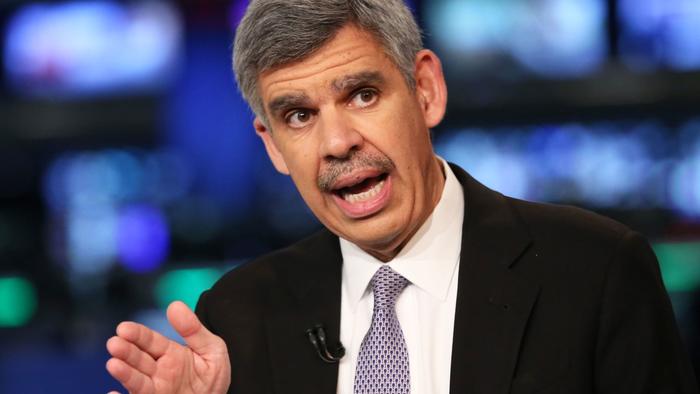 
Mohamed A. El-Erian, President of Queens’ College, Cambridge University, and Chief Economic Advisor at Allianz, the corporate parent of PIMCO, where he previously served as CEO and co-CIO, argues in the following interview with Goldman Sachs’ Allison Nathan that the Fed could be heading towards an historic monetary policy mistake by reacting too slowly to rising inflationary pressures.

Allison Nathan: At its latest meeting, the Fed watered down concerns about inflation, citing its transitory nature. Are you concerned Fed officials are too relaxed about the inflation outlook?

Mohamed El-Erian: Yes. While the data has forced the Fed to take a small step away from its narrative of transitory inflation, it continues to downplay the risk to the economy and the need for monetary policy changes. It seems to wish to hold on to a narrative of—take your pick—“extended transitory”, “persistently transitory” or “rolling transitory” inflation. I take issue with these characterizations because the whole point of transitory inflation is that it wouldn’t last long enough to change behaviors on the ground. Yet wage-setting and price-setting behavior is already changing.

Allison Nathan: But aren’t most of the underlying inflationary pressures, such as supply chain bottlenecks due to pandemic disruptions and labor shortages owing to extended unemployment benefits, likely to recede soon?

Mohamed El-Erian: The underlying cause of the current surge in inflationary pressure is deficient aggregate supply relative to aggregate demand. Part of that will likely prove transitory as the pandemic continues to recede and factories in Asia ramp up production. But part of it will likely prove more persistent due to longer-term structural changes in the economy. Company after company is rewiring their supply chain to prioritize resilience over efficiency. US labor force participation is stuck at a low 61.6% even as unemployment benefits have expired, suggesting that people’s propensity to work may have changed. So, there are longer-term structural and secular elements to the rise in inflation. And I’m concerned that if the Fed doesn’t do enough to respond to these secular inflation trends, it risks deanchoring inflation expectations and causing unnecessary economic and social damage that would hit the most vulnerable segments of our society particularly hard.

Allison Nathan: Inflation expectations so far seem to be fairly well anchored, so how much of a risk is that really?

Mohamed El-Erian: Survey-based inflation expectations are not well anchored; both short and long-term expectations compiled by the New York Federal Reserve have already risen above 4%. Companies are warning about inflationary pressures well into next year and potentially beyond. Market-based expectations remain better anchored for now, but the information content of fixed income markets has become highly distorted by the presence of a large non-commercial buyer—the Fed—that has incredible willingness to buy regardless of valuation. I think of this in the same way that I think about one of my favorite board games—Risk. When everybody on the board is playing according to the rules of the game, you can assess the probabilities of other players’ actions under certain conditions and fairly accurately predict their behavior. But when one very big player plays according to different rules, you’d adapt your behavior or you’d lose. That’s what’s happening in fixed income markets; market participants understand and respect that they will be steamrolled—as they have been time and time again— by taking the other side of massive Fed asset purchases, even when they’re convinced of a fundamental mispricing. So, I would be careful in relying on the usual market measures to gauge inflation expectations, as we don’t know how much to adjust for the distortions that the Fed has introduced.

Allison Nathan: Given the above, you believe that the Fed could be heading for an historic policy mistake. What should the Fed be doing versus what they are most likely to do?

Mohamed El-Erian: Simply put, the Fed faces a choice between easing off the accelerator now or slamming on the brakes down the road. It should’ve starting easing its foot off the monetary stimulus accelerator months ago. I’ve argued for some time that it had a big window of opportunity to start tapering asset purchases in the spring, when growth was very strong and the collateral damage from maintaining emergency levels of liquidity in a non-emergency world was becoming apparent. But, inertia, inflation miscalculations and a new policy framework that was designed for a world of deficient aggregate demand rather than today’s world of deficient aggregate supply led them to wait until earlier this month to announce the start of tapering. In doing so, the Fed has fallen behind the reality of inflationary pressures on the ground that are being picked up by the regional Feds. While it is now starting to act, it’s moving too slowly, as evidenced by the growing gap between its policy action and the rise in inflation expectations. So the Fed’s delayed and slow reaction to inflationary pressures has unfortunately increased the probability that it will have to slam on the brakes by raising rates very quickly after tapering and at a more aggressive pace than it would have if it had started to tighten policy earlier. Such a scenario would constitute an historic policy mistake because, after a bout of inflation that most hurts the poor, the economy would risk an undue blow to growth from a sharper tightening relative to what the economy can absorb.

Allison Nathan: But isn’t the Fed right to wait to act given that demand is expected to slow significantly next year as fiscal stimulus winds down? Wouldn’t it be harmful to put  contractionary monetary policy in place at the same time as contractionary fiscal policy?

Mohamed El-Erian: That’s exactly the wrong policy framing, especially given that we’re starting from emergency-level loose monetary policy. By waiting to act, the Fed will end up tightening at the same time as fiscal policy is tightening and household savings are drawing down. Financial conditions could also tighten and business investment decline simultaneously too. That’s precisely why the Fed should have moved earlier, so that relatively tighter monetary policy doesn’t run headlong into multiple other sources of tightening, which risks pushing the economy into a recession. While I don’t expect a recession in my baseline scenario, the Fed’s slow pace of policy normalization could mean that growth will be lower than it would’ve otherwise been had the Fed started tightening earlier.

Mohamed El-Erian: If initial conditions were near an equilibrium, I would say yes. But they’re not—monetary policy is still being run in emergency mode even as the emergency has passed. Even though the Fed is beginning to taper, it’s still buying tens of billions of dollars of securities every month, about a third of which are mortgage-backed securities. I don’t know a single person who believes the US housing market needs such broad-based policy stimulus. On the contrary, the housing market is so hot that an increasing number of Americans are being priced out of it. And the longer the emergency policy stance continues without an actual emergency, the greater the risk that the Fed does end up having to slam on the brakes and, in doing so, create unnecessary damage—i.e., a new recession.

Allison Nathan: How effective would rate hikes even be in dampening the current inflationary pressures, which stem in part from supply shortages?

One, there’s very little evidence that the current stance of monetary policy is helping on the demand side, and even if it were, demand is not the problem.

So, by trying to help, the Fed is actually hurting, while also worsening wealth inequality.

Two, the significant amount of liquidity the Fed has pumped into the system is increasing the probability of a market accident by forcing investors to take more risk in search of returns.

Near accidents have occurred already this year—think of GameStop/hedge funds and Archegos—which we’re lucky didn’t have systemic effects.

Just think of all the zombie companies that are surviving only because they’ve been able to refinance themselves at very low rates. The longer this continues, the  greater the drag on longer-term productivity and the more damage there will be when rates eventually rise.

Allison Nathan: What do you make of the recent sharp moves in G10 front-end rates, and how would you advise fixed income investors to navigate these moves?

Mohamed El-Erian: I’m really glad I’m no longer managing fixed income bond funds because technicals rather than macro fundamentals are ruling the fixed income markets right now, leading to these outsized moves. And, unless you are a trader that actually sees these flows, the environment is extremely difficult to navigate. I will say that the violent repricing following the Bank of England’s (BoE) recent decision to keep rates on hold was an instance of the market getting ahead of itself on pricing in rate hikes. It’s true that the BoE had signaled an intention to raise rates in coming months. But in the context of hawkish commentary and moves from central banks in Canada, Australia, and New Zealand, markets mistakenly lumped the UK together with these small, open economies that have no choice but to move ahead of the much larger, less open economies of the US and EU in raising rates. And, in fact, the UK has some very peculiar characteristics that have to be taken into account, like the furlough scheme and Brexit-related labor issues, which clearly distinguish it from these other cases.

Allison Nathan: In the midst of the current inflationary pressures and associated policy actions, equity markets, especially in the US, have been hitting new highs. What’s behind that, and do you see a risk of a correction given your concerns about the economic outlook?

Mohamed El-Erian: What’s happening in the equity market was recently captured perfectly by the legendary investor Leon Cooperman, who, when asked how he was positioned, responded that he’s a “fully invested bear”. He’s bearish on the fundamentals—with the view that valuations are too high—but he’s fully invested in terms of technicals, and liquidity technicals in particular. The equity market is in a rational bubble; investors are fully aware asset prices are quite high, but they’re in a relative valuation paradigm in which it makes sense to be invested in equities rather than in other assets. The fixed income market is distorted and one-sided in terms of risk-return, dominated by technicals, and an unreliable diversifier in the current environment where its long-standing correlation with other financial assets has broken down. Many investors can’t invest in private credit, venture capital, or private equity, and are hesitant to delve into crypto. That leaves the equity market as the “cleanest dirty shirt” for investors. That works very well as long as the paradigm is a relative valuation one rather than an absolute valuation one, and markets will likely remain in this paradigm for a while. But investors need to respect that they’re riding a huge liquidity wave thanks to the Fed, and that wave will eventually break as monetary stimulus winds down. So investors should keep an eye on the risk of an abrupt shift from a relative valuation market mindset to an absolute valuation one, or an environment in which you stop worrying about the return on your capital and start worrying about the return of your capital. That’s a risk to watch because not only would it mean higher volatility, but also, and most critically, an undue hit to the real economy.

Are Ethereum, Shiba Inu, and Mehracki Ready to Lead a Crypto Boom?