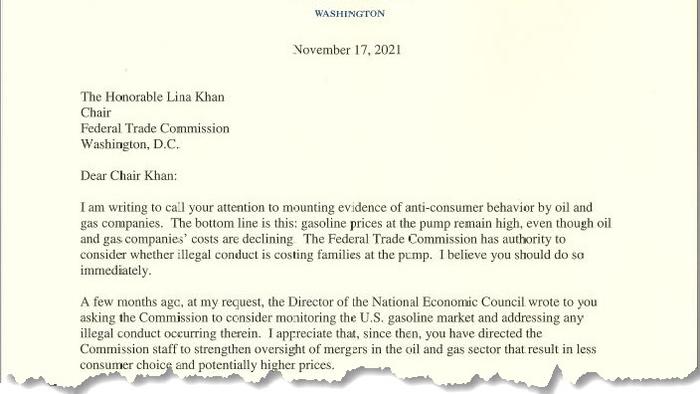 
Commenting on perhaps the most absurd moment of the Xi-Biden virtual summit, which as we learned last last night, was the US president begging China to release oil from its strategic petroleum reserve (ostensibly because due to opposition in the US, Biden can’t do that), Rabobank’s Michael Every said that it was “an odd power dynamic when one is a massive energy exporter, and the other a massive energy importer.”

Alas, it does not appear that China will rush to comply with Biden’s demands, and with gasoline soaring and becoming a major political headache for the Democrats ahead of the midterms…

… Biden, or rather his handlers, are now scrambling to come up with ways to push gas prices lower.

We got the latest lightbulb moment from the administration this morning, when moments ago Biden sent a letter to FTC Chair Lina Khan to call attention to “mounting evidence of anti-consumer behavior by oil and gas companies” alleging that he won’t accept “hard-working Americans paying more for gas because of anti-competitive or potentially illegal conduct.”

Claiming that “gasoline prices at the pump remain high, even though oil and gas companies’ costs are declining” he told the FTC to “consider illegal conduct” which is costing families at the pump, and urging the FTC to “immediately” use “all tools” to examine price wrongdoing.

Meanwhile, Biden goes on, “the largest oil and gas companies in America are generating significant profits off higher energy prices… they have announced plans to engage in billions of dollars of stock buybacks and dividends this year.”

Well… here is the answer: prices are set based on input costs and taxes, which have never been higher. Indeed, one should probably advise Biden that in addition to oil costs, taxes make up a substantial portion of the end cost of gasoline…

… and one should also show Biden the following chart showing that wholesale gas prices may lag retail prices but eventually they always converge.

As for energy companies generating tremendous profits, where was the White House last year when all the energy companies were on the verge of failure when oil collapsed (and in the case of WTI printed negative) and gasoline was the cheapest it has been in years? Oh yes, it had everything to do with tumbling oil prices.

According to Bloomberg, a White House official said the agency could decide to begin an investigation to collect data on how gas companies set prices, as well as data on actual pricing. Biden asked the commission to “further examine what is happening with oil and gas markets, and that you bring all of the commission’s tools to bear if you uncover any wrongdoing.”

We doubt any wrongdoing will be found in this purely populist fishing expedition; just as we doubt that the FTC will advise Biden that the biggest reason why gas is so expensive – surging oil prices – has to do with the president’s ludicrous “green” agenda, which has crippled investment in “dirty” fossil fuels and shut down cost-cutting pipelines across the country.

The full letter is below.

What happened to Cam Akers? How Rams RB made remarkable recovery from Achilles injury to play in playoffs