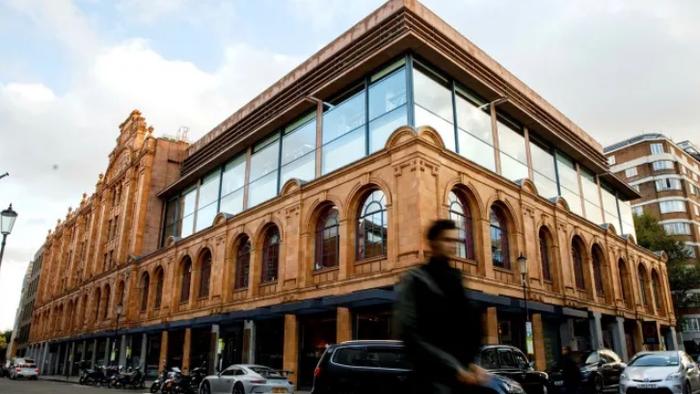 
Even God’s top authority on Earth has trouble with the simplest investing precept: buy low and sell high.

After a scandal that has dragged on for more than a year and led to the firing of one of the Holy See’s most senior officials over a handful of shady London property deals that were bleeding millions in losses, the Vatican has finally decided to rip the bandaid off and sell a luxury office building in London’s Knightsbridge neighborhood for a loss of £100MM ($135MM).

Per the FT, the Vatican is in the final stages of selling 60 Sloane Ave., a large building in the Knightsbridge district of London, for about £200MM ($271MM) to private equity group Bain Capital. Bain Capital and Savills, which is managing the sale, both declined to comment. Senior Holy See officials – including Cardinal Giovanni Angelo Becciu, the second-in-command of the Vatican’s powerful Secretariat of State – invested a total of €350MM ($405MM) of money donated to the Catholic Church for charitable purposes in London properties including the Sloane Ave. building between 2014 and 2018.

Vatican investigators say the money was taken from Peter’s Pence, an annual donation given by Catholics around the world which, according to the Vatican, is intended “for the many different needs of the universal church and for the relief of those most in need.”

At one point, the Vatican had a plan to convert the London building into luxury flats. Instead, the building has ended up at the heart of a scandal that has forced the Vatican to overhaul completely the way it manages its finances.

Several property agents who spoke to the FT expressed surprise at the losses generated by the deal.

“I couldn’t quite understand how they [the Vatican] had lost money on it,” said one agent with decades of experience in the London office market.

Whatever transpired during the deal, it appears to have reached “the Godfather III” levels of shadiness as Vatican prosecutors have charged a former Italian banker with crimes including embezzlement and fraud. The Vatican’s prosecutors recently paused charges against the banker and a small group of alleged co-conspirators including a cardinal. The prosecution is now in a state of legal limbo.

Mincione’s companies acquired the London building in 2012 for £129m. Two years later a unit of the Vatican managing charitable donations bought a stake in the property via an investment fund founded by Mincione at a far higher valuation. The Vatican acquired the rest of the building in 2018.

Vatican prosecutors say Mincione’s companies made a large profit from investing in the Knightsbridge building.

He has denied any wrongdoing, saying that the increase in the property’s value was justified by audited and independent third-party consultants. He has also said the Vatican was always advised by its own investment banks.

Vatican criminal proceedings against Mincione and others, including a cardinal, were paused last month and charges against the accused lifted after the Vatican judge requested that the prosecutors provide additional evidence to the defence lawyers.

Lawyers acting for Mincione have said the lifting of the charges means the case against him in the Vatican court is legally and, in effect, “null”.

Mincione, the banker, has seen nearly €50MM of his assets frozen in Switzerland at the Vatican’s request. Meanwhile, Mincione’s lawyers are trying to press a parallel case in the English High Court to try and un-freeze the assets. He claims Vatican officials are responsible for the loss, while prosecutors claim the loss was a result of a complicated fraud.

Whatever actually happened, one thing is clear: More than $100MM intended to go to the Catholic Church’s various ministries and missions has instead been siphoned off by greedy bankers and officials.

And it looks like a handful of private equity firms will ultimately benefit. Not exactly a good look for Pope Francis.