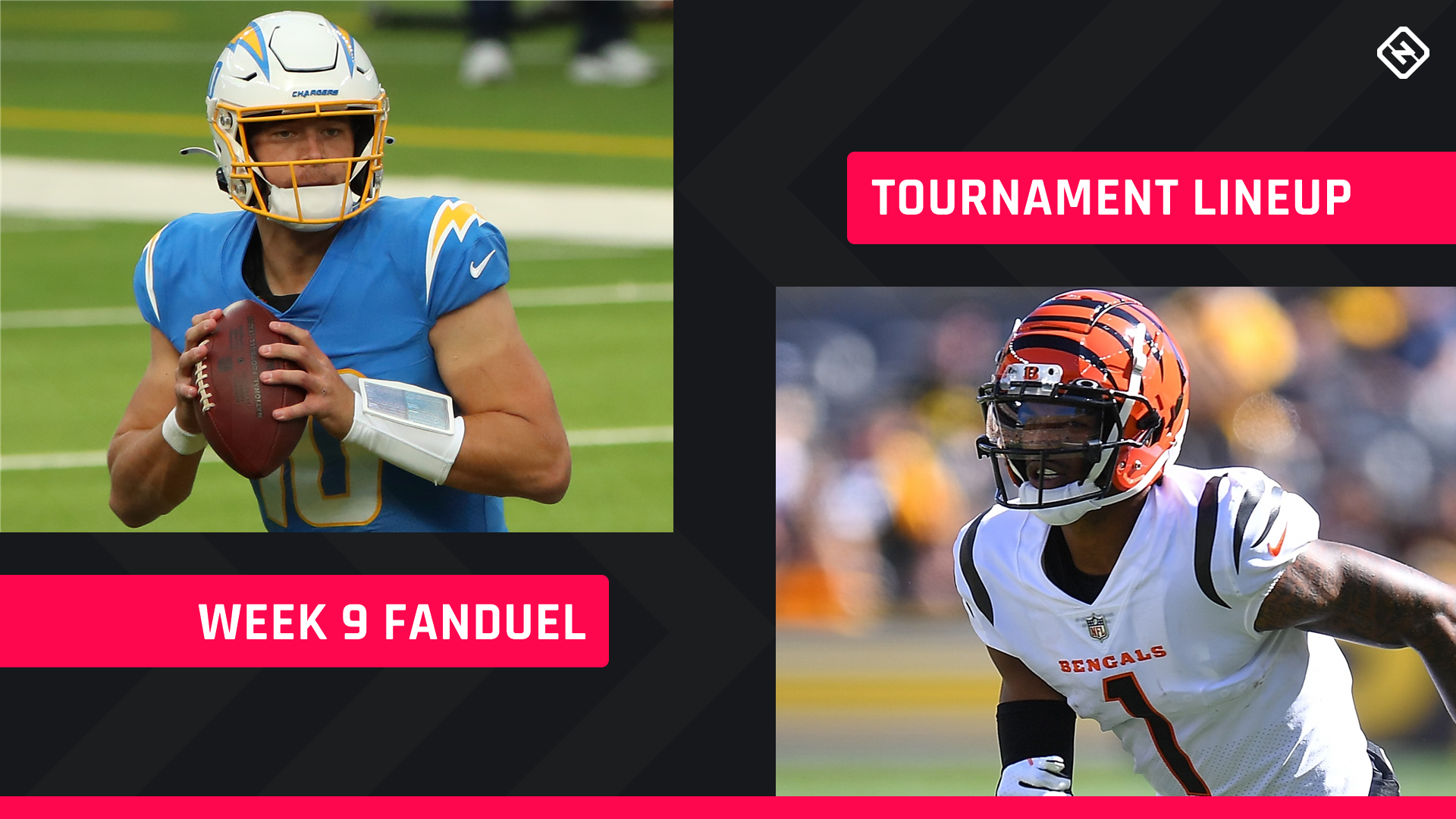 There are a few fantasy studs absent from this week’s main NFL DFS slate, but overall, there are plenty of viable options to build our Week 9 FanDuel tournament lineup. We’re looking to take advantage under-the-radar talent returning from injury and a stud QB who has been priced down a little bit due to recent struggles. As always, we’re also looking for underowned value plays who aren’t going to be chalk plays since these are daily fantasy football tournaments, not cash games. Feel free to make your own adjustments, using our lineup as a guide for some of your picks.

QB Justin Herbert, Chargers @ Eagles ($7,600). Herbert has had a pair of rough outings, but that can be forgiven against both the Ravens and Patriots. He was playing well prior to the two-game speed bump, scoring 30.84 and 42.82 FanDuel points in Weeks 3 and 5, respectively. The Eagles don’t pose the same defensive chops on paper, so the matchup should be relatively friendly.

RB Aaron Jones, Packers @ Chiefs ($8,500). This has the makings of a matchup that should deliver fireworks, and on paper, the Chiefs resemble a block of Swiss cheese ready to be shredded. Jones is coming off a 20.5 FD-point effort and continues to be active on the ground and through the air. Davante Adams’ return means Jones likely won’t get 11 targets, but he has four receiving touchdowns on the season and will continue to serve as a threat out of the backfield.

RB Josh Jacobs, Raiders @ Giants ($7,200). The week off should have provided Jacobs an opportunity to put some distance between the nagging injuries that have been hounding him. He’s scored in three straight contests, scoring at least 14.3 points in each. Teams have had success running against the Giants this season, and the Raiders should be able to continue that trend. If Jacobs is closer to 100 percent, he could see a boost in volume.

WR Ja’Marr Chase, Bengals vs. Browns ($7,900). The Bengals are fresh off a poor loss to the Jets and heading into a critical divisional matchup. They should be pumping on all cylinders Sunday, and that includes Chase. The rookie was relatively quiet last week, though he did score for the third time in four contests. In a game with such magnitude, the Bengals aren’t going to be cute about who they build their game plan around. Chase will be targeted heavily, and a bloated FanDuel score will be in the cards.

WR Jerry Jeudy, Broncos @ Cowboys ($5,800). Jeudy returned last Sunday and caught all four of his targets for 39 yards — modest production but a worthwhile outing after a six-week layoff. It’s reasonable to anticipate bigger performances as he continues to shake off lingering rust. His four looks were tied for the most on the team, but his share could increase beginning Sunday.

WR Kadarius Toney, Giants vs. Raiders ($5,700). Toney returned to action on Monday night after a one-plus game absence, though it should be noted he was in and out of the game because of a hand injury. He’s quickly established himself as the most dynamic playmaker on the Giants aside from Saquon Barkley. Another week removed from his ankle injury should theoretically put him in a position to handle more snaps and dominate targets — assuming he doesn’t have any setbacks with his hand.

TE Dallas Goedert, Eagles vs. Chargers ($6,200). The Eagles attempted just 16 passes on Sunday, seven of which went to Goedert. That gives him 12 targets in the two games since Zach Ertz was dealt to the Cardinals. The Chargers will provide more resistance than the Lions were able to manage, making it likely that Goedert remains busy. He’s scored a shade over 10.0 FanDuel points in each of the past two contests, suggesting a solid floor. If he can get into the end zone, he’ll be more than worth the investment.

FLEX Cordarrelle Patterson, Falcons @ Saints ($7,000). The natural inclination is to expect big performances from players taking on larger roles. That didn’t happen to the degree many were expecting last week, but with Calvin Ridley (personal) set to miss this week’s contest — and presumably more — Patterson will continue to play a big role in the offense as a runner and receiver.

DEF Bengals vs. Browns ($3,800). There might be few things more humbling than a loss to the Jets. The Bengals have emerged as a solid defense — and team — but they’re not immune from reading their press clippings. The Bengals have been solid in the takeaway department with nine and rank fifth with 21 sacks. Another letdown won’t be a concern against the division-rival Browns.