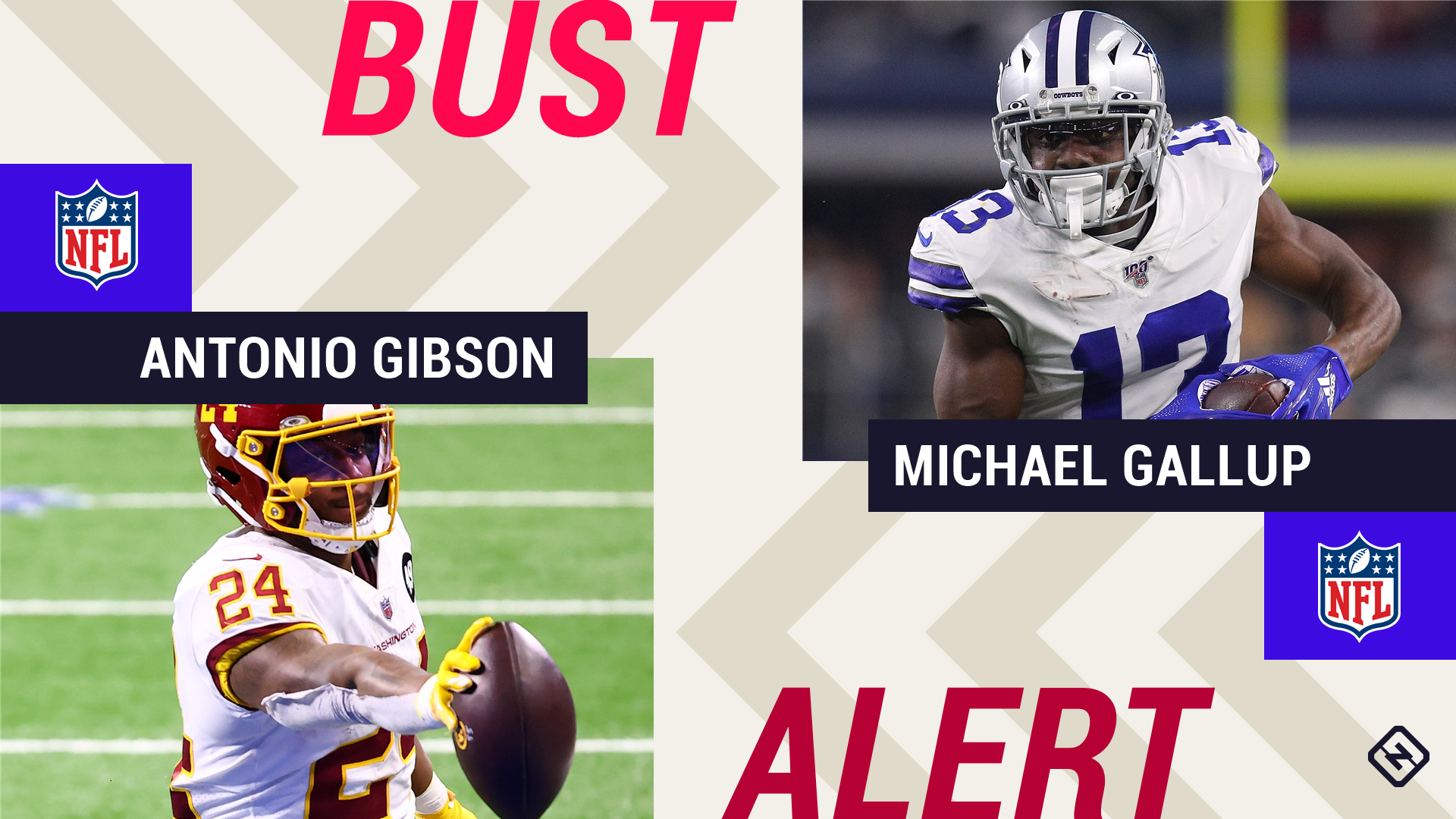 Identifying possible busts ahead of your fantasy start ’em, sit ’em decisions is how you avoid having disastrous weeks. When choices are limited, like they were last week, it can be tough to sit even borderline players. When choices are a little more plentiful, like this week, you might have a tough time deciding on two players who you start most weeks.  We’ve picked our potential Week 8 fantasy busts, featuring notable names like Antonio Gibson and Michael Gallup and up-and-coming guys like Khalil Herbert and Tua Tagovailoa, to help you decide who to start in Week 8.

As always, even perennial stars can bust in favorable matchups, but it’s tough to call superstars “busts.” We’ll stick to naming guys on the start-or-sit bubble — not “must-starts” and not guys who are on over 90 percent of waiver wires. As mentioned above, you can’t always avoid players on this list. Sometimes you don’t have the depth to reasonably bench these guys (or you might just totally disagree with our assessments), especially in a week like this.

We had a disastrous Week 7 in our sleepers post, and while our Week 7 busts weren’t so bad, they weren’t the best either. First, what went right — Rashaad Penny, Tyler Boyd, and our three defensive selections (Raiders, 49ers, Ravens) are solid choices. On the flip side, Derek Carr, Elijah Mitchell, and Zach Ertz had productive fantasy days. We prefer not to comment on our selection of Joe Burrow — oops.

Tyler Higbee, Evan Engram, Rashod Bateman, Corey Davis, and Chase Edmonds had good enough days to not necessarily call them busts but had average days, at best. Again, with so many teams back from bye, the player pool is a lot larger, and we have a better picture of who the riskier players are this week.

James Conner, Cardinals vs. Packers (Jackson Sparks). Despite some of Aaron Rodgers’ weapons being on the reserve/COVID-19 list, Green Bay will keep this game competitive. Conner has feasted when the Cardinals have big leads, but this feels like more of a Chase Edmonds game.

Antonio Gibson, Washington @ Broncos (Vinnie Iyer). Denver’s run defense will rebound at home as WFT is careful with Gibson’s touches with the shin still hurting and a bye looming in Week 9. You still probably need to start him in most formats, but prepare to be disappointed again.

Khalil Herbert, Bears vs. 49ers (Matt Lutovsky). Herbert has been dynamite for the Bears the past two weeks, but with Damien Williams back fully healthy, Herbert might see a downtick in touches. Even if he doesn’t, the 49ers rank ninth in fewest rushing yards allowed to RBs, so Herbert will likely need to get into the end zone to really pay off.

Tua Tagovailoa, Dolphins @ Bills (Sparks). We touted Tua as one of our top sleepers in the preseason and have mentioned him in the past two editions of our sleeper picks. In Week 7, he was the No. 1 overall scorer in fantasy football. However, Buffalo’s defense is a whole different animal than the Falcons’ or Jaguars’ defenses. It gives up the fewest fantasy points to quarterbacks and has yielded 21-plus points to Taylor Heinicke, mostly in garbage time and aided by a rushing touchdown. The Bills’ defense outmatches Miami’s offense in every aspect, so don’t start Tua unless you’re in a tough spot.

Justin Herbert, Chargers vs. Patriots (Iyer). New England has lost some bodies in the secondary, but it still has great scheming and will limit the big plays of Herbert and force him to get impatient with the ball.

Jameis Winston, Saints vs. Buccaneers (Lutovsky). It’s easy to hype the “revenge game” narrative here, but the Saints simply aren’t a high-volume passing team. Nine of Winston’s 13 passing TDs have come in two games, and he’s thrown for more than 226 yards just once. Tampa’s pass defense has also improved after a rocky start, limiting Jalen Hurts and Justin Fields to 299 passing yards, one TD, and four INTs combined. Winston will make it three bad games in a row for QBs against the Bucs.

Jakobi Meyers, Patriots @ Chargers (Sparks). Meyers could be productive in PPR leagues based on pure volume, but the yardage total should be low. Los Angeles gives up the fewest points to fantasy WRs and has yet to allow a single wideout to even get to 14 fantasy points (half-PPR). The list of receivers they’ve faced includes Tyreek Hill, CeeDee Lamb, Amari Cooper, Marquise Brown, and Terry McLaurin. If those guys were limited, shouldn’t we expect the same result with Meyers, especially with LA coming off a bye?

Mike Evans, Buccaneers @ Saints (Iyer). You still need to roll with him but he’s a classic boom-or-bust guy and his history in the Marshon Lattimore matchup isn’t good, regardless of QB.

Michael Gallup, Cowboys @ Vikings (Lutovsky). Gallup (calf) is expected to play for the first time since Week 1, but the Cowboys No. 3 is the definition of a “boom-or-bust” play. Ezekiel Elliott is back to being a high-volume part of the offense, and Amari Cooper and CeeDee Lamb are always going to command significant volume. Tight end Dalton Schultz has also established himself as a reliable target. Gallup could always get loose for a big play, but against a middle-of-the-road Vikings’ defense, there’s no reason to expect that.

Jared Cook, Chargers vs. Patriots (Sparks). To keep it simple, Cook has been inconsistent this year, and New England gives up the third-fewest points to fantasy TEs.

Dalton Schultz, Cowboys @ Vikings (Iyer). This screams to be a wide receiver-heavy game for Dak Prescott given the Minnesota cornerbacks stink without Patrick Peterson. Also, beware of more of Blake Jarwin.

Mike Gesicki, Dolphins @ Bills (Lutovsky). If you own Gesicki, you’re probably not sitting him, but it’s at least worth considering if you have a decent alternative. Buffalo limited Gesicki to three catches for 41 yards in Week 2, and even with Tua Tagovailoa (presumably) playing the whole game this time, Gesicki will have his work cut out for him against a Bills defense allowing the seventh-fewest FPPG to TEs.

Carolina Panthers @ Falcons (Sparks). After looking like the best defense in the league by a mile after three weeks, this Carolina stop-unit is unraveling before our eyes. They were touched by Minnesota in Week 6 then allowed the Giants — without Saquon Barkley, Sterling Shepard, Kadarius Toney, and Kenny Golladay — score 25 points. So how will they fair against Matt Ryan, Cordarrelle Patterson, Calvin Ridley, and Kyle Pitts? We say not so well.

Cleveland Browns vs. Steelers (Iyer). It’s hard to see them putting up enough points at home with a cleaner Pittsburgh run-heavy offense coming out of the bye.

New England Patriots @ Chargers (Lutovsky). The Ravens somehow limited the Chargers to six points in L.A.’s last game, but they managed just two sacks and one takeaway. In the three games prior (Chiefs, Raiders, Browns), the Bolts averaged 35 points, 1.7 sacks allowed, and 0.3 turnovers. The rested Chargers will be a brutal matchup for the jet-lagged Patriots.