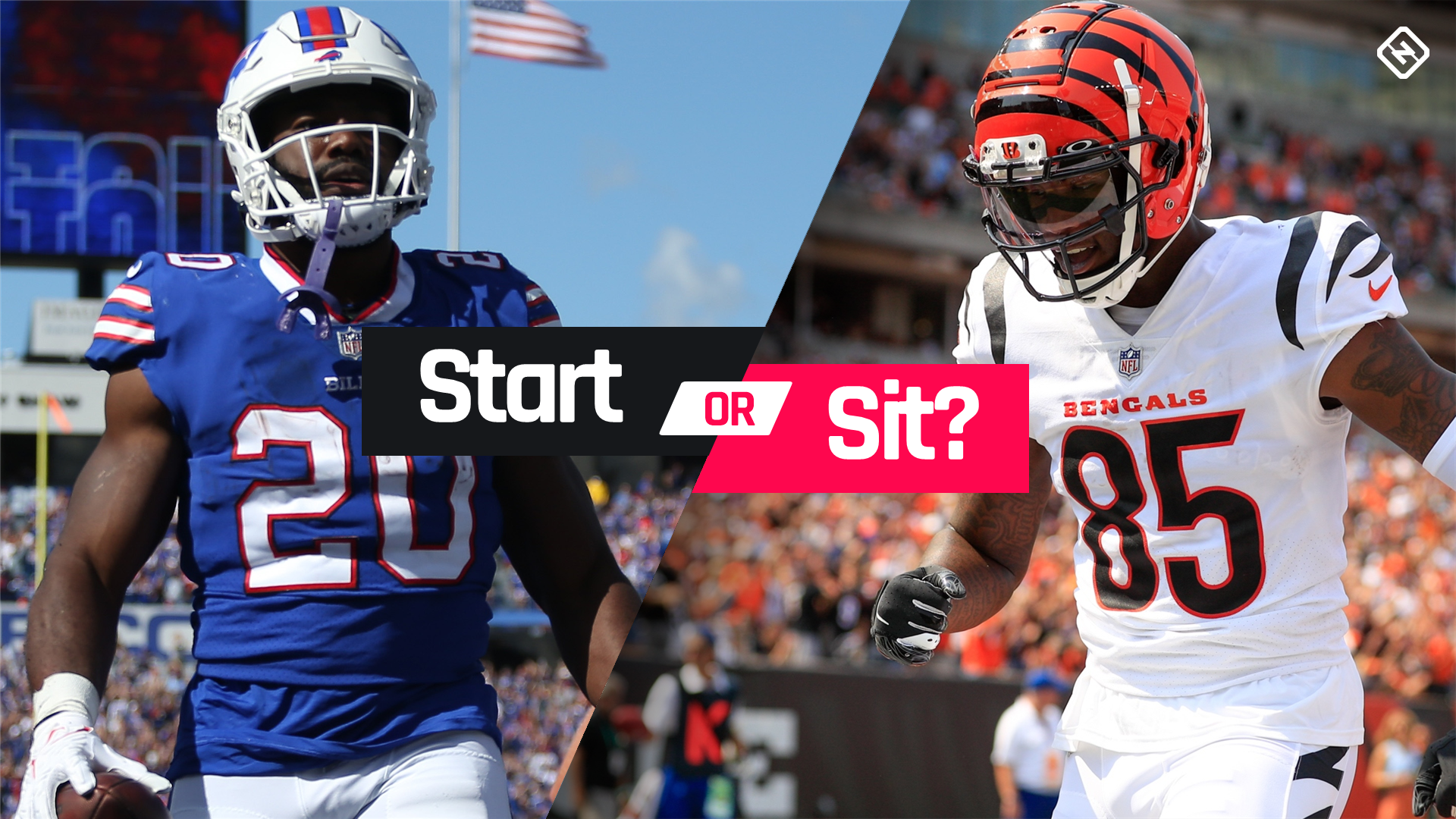 With more teams and players at fantasy football owners’ disposal this week, you can make an argument that start ’em, sit ’em decisions will actually be more difficult than they were during the six-team bye last week. When you add in injuries and unsettled RB/WR situations, there are definitely question marks all over the place. Fortunately, Vinnie Iyer is here with Week 8 fantasy lineup advice so you have a better idea of who to start and who to avoid in both season-long leagues and DFS contests.

Just two teams (Raiders, Ravens) are on bye this week, and they feature only a handful of “must-starts” between them. Still, with the likes of Marquise Brown, Lamar Jackson, Darren Waller, Mark Andrews, and Josh Jacobs unavailable — plus of host of injured players — plenty of fantasy owners will have to dig deep for waiver wire streamers and reserve sleepers. Below, we’ll discuss those players and all the borderline fantasy plays who give you headaches every week.

Kirk Cousins, Vikings (vs. DAL). Cousins is at home and should have high volume in what can be a very fantasy-friendly prime-time shootout with Dak Prescott.

Ryan Tannehill, Titans (at IND). Tannehill is back to doing his 2020 things with the offense back on track and a solid ahead.

Matt Ryan, Falcons (vs. CAR). He’s feeling it in Arthur Smith’s offense with all of his weapons, and the Panthers’ D won’t slow him down much.

Carson Wentz, Colts (vs. TEN). Wentz is loving being back with Frank Reich, and the Titans’ defense will come back to earth on the road.

Trevor Lawrence, Jaguars (at SEA). Lawrence will come out of a bye in a comfortable spot playing off the run against the lowly Seahawks defense.

Jameis Winston, Saints (vs. TB). Winston’s “revenge game” will be modest in 250-yard and two-TD range, but he can have a good garbage day at home opposite Tom Brady.

Teddy Bridgewater, Broncos ($5,400 on DraftKings, $7,000 on FanDuel). Bridgewater should be healthier to exploit a bad Washington pass defense at home given he has the wide receivers and tight ends needed to get the job done.

Justin Herbert, Chargers (vs. NE). Herbert will see his big-play passing contained by Bill Belichick’s defense as this become more of a grinding effort.

Daniel Jones, Giants (at KC). The matchup screams “yes,” but the Chiefs will overachieve defensively in desperation at home in prime time against an injury-plagued Giants offense.

Sam Darnold, Panthers (at ATL). This is another matchup that says “yes,” but Darnold has been awful of late against anyone. There’s also no guarantee he lasts the whole game.

Taylor Heinicke, Washington (at DEN). He can have a Case Keenum-like game against the Broncos, but that’s not good enough to deploy.

Tua Tagovailoa, Dolphins (at BUF). He gets cooled off after two hot games against much worse pass defenses.

Mac Jones, Patriots (at LAC). The Patriots should want to run, run and run some more in Los Angeles.

Ben Roethlisberger, Steelers (at CLE). He will be better after the bye, but this will be more a defensive-minded battle of attrition.

Devontae Booker, Giants (at KC). He’s a volume-based play if Saquon Barkley (ankle) is out, and Booker can do enough damage against a weak run defense.

Chase Edmonds and James Conner, Cardinals (vs. GB). They both came through last week and should be involved in key spots in what should be high-scoring TNF.

Devin Singletary and Zack Moss, Bills (vs. MIA). They both smashed in the first meeting and should be busy in the second half for the rematch.

Khalil Herbert, Bears (vs. SF). They seem intent getting him the ball to run often regardless of score, and the rookie will be solid with volume again.

Michael Carter, Jets (vs. CIN). He’s getting the bulk of the work everywhere now, and Mike White’s presence probably won’t affect that.

Alex Collins, Seahawks (vs. JAX). He’s the best of what they have, sadly, and can be trusted in a cake matchup.

Samaje Perine, Bengals (at NYJ). If desperate, you could hope for another blowout scenario where he matches Joe Mixon in work.

Kenneth Gainwell, Eagles (at DET, $5,000 on DraftKings, $5,900 on FanDuel). Gainwell should see a lot more critical work with Miles Sanders (ankle) ailing, and the game script might actually allow Philadelphia to run more to support Jalen Hurts and close out the Lions.

Javonte Williams, Broncos (vs. WAS, $5,300 on DraftKings, $5,900 on FanDuel). This other top rookie should get more attention after scoring his first TD last week, and he should slowly earn more vital touches over Melvin Gordon III.

Myles Gaskin, Dolphins (at BUF). He will get more touches with no Malcolm Brown (quad), but the matchup is brutal.

A.J. Dillon, Packers (at ARI). The game will be more of a shootout with no guarantee for positive game script.

Tony Pollard, Cowboys (at MIN). He should get only limited work behind Zeke after the bye.

Mike Davis, Falcons (vs. CAR). You can’t go there in this committee.

Jamaal Williams, Lions (vs. PHI). You can’t go there in this committee.

Mark Ingram, Texans (vs. LAR). You can’t go anywhere in this committee.

Chase Claypool, Steelers (at CLE). He should be fully healthy, and they will make it a point to get him deep.

DeVonta Smith, Eagles (at DET). He needs to start performing, and this matchup has to be a get-well game after the Buccaneers and Raiders disappointments.

Emmanuel Sanders, Bills (at MIA). The Dolphins can’t really cover anything outside or inside at this point.

Tyler Lockett, Seahawks (vs. JAX). It’s been rough for him with Geno Smith, but the matchup will get him back on track working away from Metcalf.

Christian Kirk and A.J Green, Cardinals (vs. GB). They have a chance to do more major damage away from DeAndre Hopkins with the Packers’ secondary being a mess.

Corey Davis, Jets (vs. CIN). He’ll be good for more garbage regardless of QB.

Marquez Callaway, Saints (vs. TB). There will be forced volume from Jameis Winston this week with negative game script, and Callaway should score late.

Jerry Jeudy, Broncos (vs. WAS, $4,900 on DraftKings, $6,000 on FanDuel). This feels like his type of game back at home back working for Teddy Bridgewater opposite Courtland Sutton.

Tee Higgins and Tyler Boyd, Bengals (at NYJ). This is “The Ja’Marr Chase Show,” and the Jets’ cornerbacks are rather tough all-around.

Jaylen Waddle, Dolphins (at BUF). The matchup is brutal everywhere against their cornerbacks, so sit him along with Tua Tagovailoa.

Jakobi Meyers, Patriots (at LAC). The matchup isn’t good and the usage is getting weird compared to the other wide receivers.

Laviska Shenault Jr., Jaguars (at SEA). His usage still cannot be trusted after a bye.

Allen Robinson and Darnell Mooney, Bears (vs. SF). You want to play both of them, but Justin Fields is killing them.

All Giants (at KC). You can’t go there with Daniel Jones disappointing.

All Browns (vs. PIT). It’s getting ugly out there with injuries and quarterback uncertainty in a tough matchup.

Rondale Moore, Cardinals (vs. GB). He’s gone to being the odd man out with more mouths to feed.

Hunter Henry, Patriots (at LAC). His “revenge game” is also a great matchup to help keep up the scoring streak.

Tyler Higbee, Rams (at HOU). The matchup is terrific, and he should go back to finding the end zone.

Zach Ertz, Cardinals (vs. GB). He should have another strong scoring chance on Thursday night.

Robert Tonyan, Packers (at ARI). He carries must-start value with no Davante Adams (COVID) with a big target bump even though the matchup by the numbers isn’t that good.

Mo Alie-Cox, Colts (vs. TEN). He’s getting it done for Carson Wentz every week now.

Evan Engram, Giants (at KC). Engram should be the best bet for any kind of Giants receiving production.

C.J. Uzomah, Bengals (at NYJ, $3,800 on DraftKings, $5,700 on FanDuel). He’s red hot, and the matchup calls for him to deliver given the Jets have good cornerbacks but have gotten weaker at safety.

Dalton Schultz, Cowboys (at MIN). He’s hard to trust with Blake Jarwin in the mix and more wide receiver help on the way.

Ricky Seals-Jones, Washington (at DEN). You might need to use him, but the matchup by the numbers isn’t that good.

O.J. Howard and Cameron Brate, Buccaneers (at NO). This really doesn’t happen except for TD hopes whether Rob Gronkowski (ribs) plays or not.

Jared Cook, Chargers (vs. NE). This isn’t the best spot for Justin Herbert or his key weapons, especially with other tight ends involved.

Falcons (vs. CAR). This is a good play regardless of who start for the Panthers.

Chargers (vs. NE). They will force some mistakes from Daniel Jones with good pressure.

Broncos (vs. WAS). Back at home, they should be ready to rock Taylor Heinicke.

Eagles (at DET). Jared Goff is way off, and this defense has enough playmakers.

Seahawks (vs. JAX). They can create a few problems for Trevor Lawrence with creative scheming.

Chiefs (vs. NYG). Give them the prime-time emotional bump toward big plays on MNF.

Patriots (at LAC). It’s not the best spot on paper, but they can disrupt the Chargers the way the Ravens did in Week 6.

Bears (vs. SF, $2,700 on DraftKings, $3,700 on FanDuel). The Bears should bear down at home with their offense struggling and be in position for some cheap sacks and a couple takeaways.

Panthers (at ATL). They can do some nice things, but the Falcons’ offense is sizzling and it’s on the road.

Cardinals (vs. GB). Not against Aaron Rodgers, even at home in prime time.

Browns (vs. PIT). The Steelers should be rather clean offensively after a bye.

Colts (vs. TEN). They are playing better and at home, but the Titans are on fire.

Saints (vs. TB). Not against Tom Brady even at home in the featured game of the week.

Vikings (vs. DAL). Not against Dak Prescott even at home in prime time.

Get more of Vinnie Iyer’s in-depth fantasy football advice for Week 8 by subscribing to the Locked On Fantasy Football podcast.