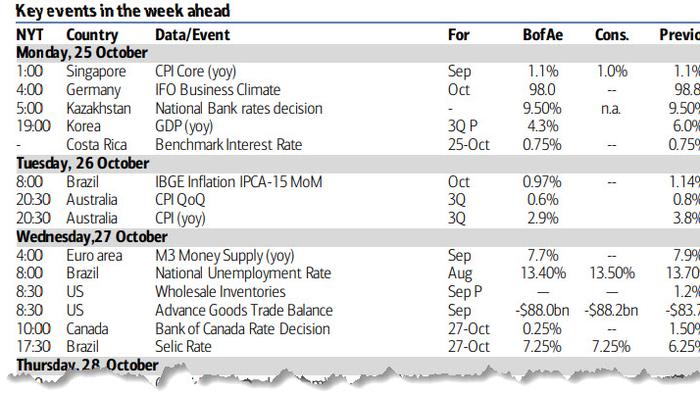 
While the FOMC enters its quiet period ahead of next week’s taper announcement, it’s still set to be a bumper week ahead for markets.

Amid silence from FOMC speakers, we get decisions from the ECB and the Bank of Japan (both Thursday). As DB’s Jim Reid notes, inflation will obviously remain in the spotlight too as we get the October flash estimate for the Euro Area (Friday) with some regional numbers like German (Thursday) before. In addition, the Q3 earnings season will ramp up further, with 165 companies in the S&P 500 reporting, including Facebook (today), Microsoft, and Alphabet (both tomorrow), and Apple and Amazon (Thursday). Elsewhere, the UK government will be announcing their latest budget and spending review (Wednesday), Covid will remain in the headlines in light of the growing number of cases in many countries, and we’ll get the first look at Q3 GDP growth in the US (Thursday) and the Euro Area (Friday).

Starting with those central bank meetings, we’re about to enter a couple of important weeks with the ECB and BoJ meeting this week, before the Fed and the BoE follow the week after. Market anticipation is much higher for the latter two though.

So by comparison, the ECB and the BoJ are likely to be somewhat quieter, and DB’s European economists write in their preview that this Governing Council meeting is likely to be a staging ground ahead of wide-ranging policy decisions in December, and will therefore be about tone and expectations management. One thing to keep an eye on in particular will be what is said about the recent surge in natural gas prices, as well as if ECB President Lagarde challenges the market pricing on liftoff as inconsistent with their inflation forecasts and new rates guidance. 5yr5yr Euro inflation swaps hit 2% for the first time on Friday so if the market is to be believed the ECB has achieved long-term success in hitting its mandate. With regards to the meeting, there’ll be more action in December where economists’ baseline is that there’ll be confirmation that PEPP purchases will end in March 2022.

Speaking of inflation, it will remain heavily in focus for markets over the week ahead, with recent days having seen investor expectations of future inflation rise to fresh multi-year highs. This week one of the main highlights will be the flash Euro Area CPI reading for October, which is out on Friday. Last month, CPI rose to 3.4%, which is the highest inflation has been since 2008, and this time economists are expecting a further increase in the measure to 3.8%. However, their latest forecast update expects that we’ll see the peak of 3.9% in November, before inflation starts to head back down again (it won’t be the first time economists have been dead wrong about inflation being transitory). The other main data highlight will come from the Q3 GDP figures, with releases for both the US and the Euro Area. For the US on Thursday the Atlanta Fed tracker has now hit a low of only +0.53%. DB is at 2.3% with consensus at 2.8%.

On to the main event this week, earnings season really ramps up in the next five days with the highlights including some of the megacap tech firms, and a total of 165 companies in the S&P 500 will be reporting. Among the firms to watch out for include Facebook today; tomorrow, we’ll hear from Microsoft, Alphabet, Visa, Eli Lilly, Novartis, Texas Instruments, UPS, General Electric, UBS and Twitter. On Wednesday, releases will include Thermo Fisher Scientific, Coca-Cola, McDonald’s, Boeing, General Motors, Santander and Ford. Thursday then sees reports from Apple, Amazon, Mastercard, Comcast, Merck, Royal Dutch Shell, Linde, Volkswagen, Starbucks, Sanofi, Caterpillar, Lloyds Banking Group and Samsung. Finally on Friday, we’ll hear from ExxonMobil, Chevron, AbbVie, Charter Communications, Daimler, BNP Paribas, Aon and NatWest Group.

In the UK, the main highlight next week will be the government’s Autumn Budget on Wednesday, with the Office for Budget Responsibility also set to release their latest Economic and Fiscal Outlook alongside that. In addition to the budget, the government will also be outlining the latest Spending Review, which will cover public spending priorities over the next 3 years. DB’s UK economists expect that 2021-22 borrowing is expected to be revised down by £60bn, and they expect day-to-day spending will follow the path set out at the Spring Budget. They’re also expecting Chancellor Sunak will outline new fiscal rules.

Finally, the pandemic is gaining increasing attention from investors again, with a number of countries having moved to toughen up restrictions in light of rising cases. This week, something to look out for will be the US FDA’s advisory committee meeting tomorrow, where they’ll be discussing Pfizer’s request for an emergency use authorization for its vaccine on 5-11 year olds. The CDC’s advisory committee is then holding a meeting on November 2 and 3 the following week, and the White House have said that if it’s authorised then the vaccine would be made available at over 25,000 paediatricians’ offices and other primary care sites, as well as in pharmacies, and school and community-based clinics. The full day by day calendar is at the end as usual.

Courtesy of Deutsche Bank, here is a day-by-day calendar of events

Focusing on just the US, Goldman writes that the key economic data releases this week are the durable goods report on Wednesday, the Q3 GDP release on Thursday, and the core PCE report on Friday. There are no speaking engagements from Fed officials this week, reflecting the FOMC blackout period.