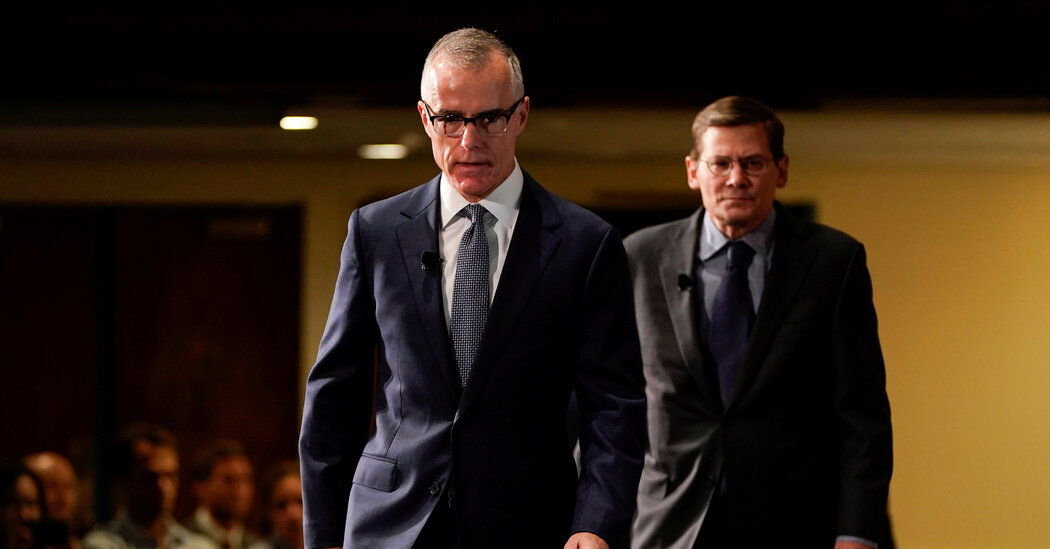 
With the lawsuit resolved, the Justice Department and F.B.I. avoid the risk that moving toward a trial could produce embarrassing information through the discovery process and depositions. In September 2020, a federal judge rejected the department’s efforts to dismiss the case, allowing the litigation to move forward.

Mr. McCabe’s lawyers had planned to question the F.B.I. director, Christopher A. Wray, and his former deputy, David L. Bowdich. The lawyers would have also grilled Mr. Sessions and his deputy at the time, Rod J. Rosenstein, as well as others, including the department’s inspector general, Michael E. Horowitz.

Mr. McCabe and his lawyers had argued that he was fired because he refused to swear loyalty to the president at the time. He also had been part of F.B.I. leadership that opened an investigation into whether any Trump campaign associates had conspired with Russia in the 2016 presidential election. Mr. Trump repeatedly called the inquiry a witch hunt and fired the F.B.I. director at the time, James B. Comey, after expressing his fury about the investigation.

Mr. Trump had urged the Justice Department to get rid of Mr. McCabe. After the news media reported in December 2017 that Mr. McCabe planned to retire, Mr. Trump said on Twitter that “FBI Deputy Director Andrew McCabe is racing the clock to retire with full benefits. 90 days to go?!!!”

Mr. McCabe, a graduate of Duke University and of Washington University School of Law in St. Louis, joined the F.B.I. in 1996 as an agent in the New York office and quickly climbed the bureau’s ranks. Mr. Comey appointed Mr. McCabe deputy director in 2016, putting him in charge of operations as the bureau’s senior most agent.

Mr. McCabe’s rise in the bureau took a vertiginous turn in January 2018 when Mr. Wray demoted Mr. McCabe without telling him why. Mr. McCabe then elected to take leave until March, when he was eligible for retirement.

Nearly a month after he was fired, the inspector general released his findings, issuing a report on Mr. McCabe’s conduct, saying he had failed to be completely honest in answering questions about his role in the news media leak about the Clinton case.