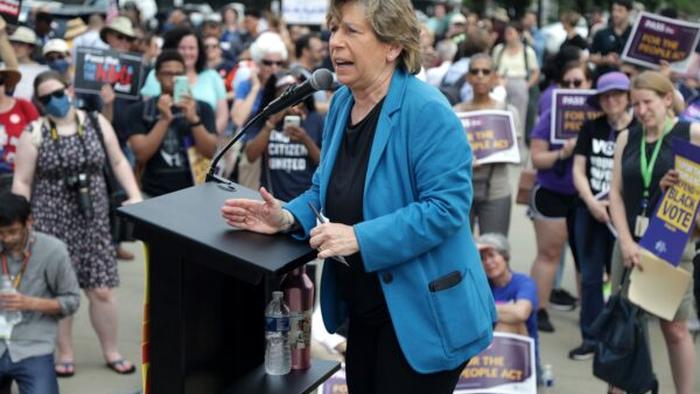 The Centers for Disease Control and Prevention (CDC) issued last-minute changes to its school-reopening guidance after two prominent teachers unions asked the agency to do so, according to newly obtained emails by watchdog group Americans for Public Trust.

The emails, obtained through a Freedom of Information Act request by the watchdog and published online show a string of communications between the CDC, the National Education Association (NEA), and the American Federation of Teachers (AFT), the nation’s second-largest teachers union and one of the top donors to the Democratic Party.

Multiple emails show that both of the teachers unions also received a copy of the guidance, pertaining to the reopening of K–12 schools, shortly before the CDC released it to the general public.

“These documents are further evidence that instead of following the science, the White House and the CDC allowed politics to influence policy,” Caitlin Sutherland, executive director of Americans for Public Trust, told Fox News.

One such email from AFT’s senior director of health issues, Kelly Trautner, to the CDC Director Rochelle Walensky on Feb. 11, shows AFT suggesting alterations be made to the CDC’s guidance just one day before it was publicly posted.

“Thank you for your continued openness to our suggestions and input. We would like to share some thoughts regarding the paragraph below which was apparently leaked from the imminent guidance on reopening schools.”

“At any level of community transmission, all schools can provide in-person instruction (either full or hybrid), through strict adherence to mitigation strategies. Recommended learning modes vary to minimize risk of SARS-CoV-2 transmission in school by emphasizing layered mitigation, including school policies requiring universal and correct mask use. The recommended learning modes (in-person, hybrid) depend on the level of community transmission and strict adherence to mitigation.”

Within the email, Trautner says that “it would be great,” if the CDC insert the line:

“In the event high-community transmission results from a new variant of SARS-CoV-2, a new update of these guidelines may be necessary.”

Trautner goes on to cite concerns over the “likely” implications the language will have in schools where it is difficult to adhere to strict mitigation strategies due to them being located in “high density, crumbling infrastructure areas, and particularly when community transmission is high.”

“We don’t believe that any current research has demonstrated that all schools in those areas can safely reopen,” Trautner wrote.

Walensky forwarded the email on to the CDC’s Director of Preparedness and Emerging Infections, Henry Walke, who replied, “Yes, will work with team.”

On Feb. 12, Walke emailed Walensky with updated language for the guidance, writing, “see below, new is second paragraph.”

“Super, thank you for doing that,” Walensky replied, adding, “I’m so grateful for your help.”

People who are part of standout protest organized by the American Federation of Teachers chant, hold signs, and raise their fists outside of the Massachusetts State House in Boston, Mass., on Aug. 19, 2020. (Scott Eisen/Getty Images)

The emails also show CDC officials coordinating an early release of the final guidance with both teachers unions.

An email dated Feb. 11 from the CDC’s acting associate director for communications, Christopher Jones, has the subject headline, “AFT/NEA closing the loop.”

“Greta and team will reach out to NEA/AFT this evening to set up a technical discussion tomorrow with both groups to talk through the CDC operational strategy,” Jones wrote.

“Targeting 1130am so they have time to digest prior to the 2 pm release. Feel free to make that offer when you talk to them this evening and say CDC will be reaching out later tonight to set it up,” he continued.

Walensky responded: “Perfect. Will do. Will try to reach them before I board. Thank you!”

The following day, on Feb. 12, Jones wrote that the Department of Health and Human Services “said they are comfortable if we want to send something out at 145 we can. I am going to send the strategy and FS [fact sheet] to the unions at 145. If you all want to send the FS to partners at that time, that is fine. Amy, lets send FS to press at 145.”

Jones messaged Becky Pringle, NEA’s president, and Randi Weingarten, AFT’s president, thanking them for their “continued partnership and input,” along with a PDF version of the strategy posting that day with a fact sheet embargoed until 2 p.m.

“I know not much lead time but wanted to send your way as soon as was able,” Jones wrote.

Randi Weingarten, president of the American Federation of Teachers, speaks during a rally in front of the U.S. Supreme Court in Washington on June 9, 2021. (Alex Wong/Getty Images)

AFT President Randi Weingarten has defended her organization communicating with the CDC regarding its school opening guidelines earlier this year.

“The CDC in February and March basically asked all sorts of different organizations to sit down with them and give them comments about what they thought was important,” Weingarten said in an interview with C-SPAN’s Washington Journal.”They talked to parent organizations, they talked to the two [teachers] unions.”

“This is normal rule-making,” she said.

The Epoch Times has contacted the CDC and the National Education Association and the American Federation of Teachers for comment.

Someone Just Sent $802M In Bitcoin To An Anonymous Wallet | Benzinga