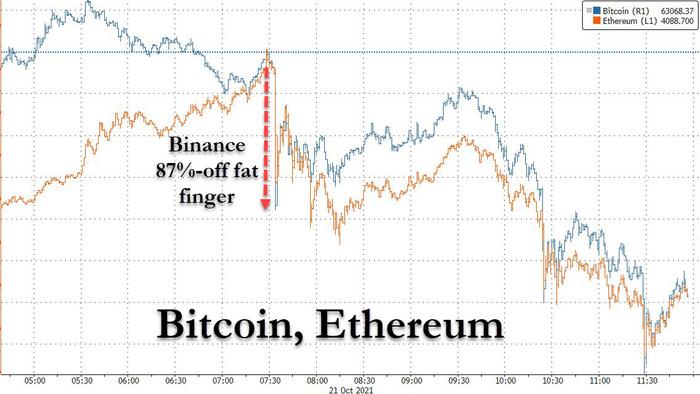 
At exactly 7:34am ET, with Ethereum trading in record territory at Bitcoin not too far from its own all-time high hit just hours earlier, the crypto space was slammed with what appeared to be a liquidation order, one which immediately halted the upward momentum and sent cryptos sharply lower (perhaps just as intended).

As Bloomberg notes, either someone (like an enterprising short who was deeply underwater and desperate for any trick to push momentum lower) was in a huge hurry to dump bitcoin (even if it meant taking a big loss on the trade), or we had a legitimate fat finger trade because at precisely 7:34am ET the price of Bitcoin appeared to plunge about 87% on Binance’s U.S. exchange, sinking to as low as $8,200 from around $65,000.

The price, which quickly snapped back to where it had been and which was not repeated on other venue, was however enough to immediately crush momentum and send ETH from an all time high above $4,350 to as low as $4,000 a few hours later.

According to Binance, volume on the exchange at 7:34am when the broader market was shocked by the “fat finger”, was 592.8 Bitcoins, or just shy of $40 million at prevailing prices.

To be sure, this is not the first time we have observed an outsized “fat finger” – as Bloomberg tongue-in-cheek notes mistakes like this happen often, “traders mess up details of their intended trades, entering the wrong price or order size. An erroneously large trade, as one example, can overwhelm an exchange’s order book, leading to a quick and massive decline.” The entire U.S. stock market famously flash crashed back in May 2010, a move which the SEC notoriously and hilariously blamed on one solitary person, Navinder Sarao, who was subsequently sentenced to prison.

And while that is of course accurate, the only question that matters is whether someone “fat fingered” bitcoin – a notoriously momentum-driven asset – on purpose with the clear intention of crushing upward momentum even if it meant millions of dollars in losses, which however would likely offset far greater losses on a standing short position if the trade managed to push momentum lower.

That said, we doubt today’s “glitch” – whether accidental or premeditated – will do much to dent the upward wave in cryptos; indeed, it happened on a day when Ether hit an all-time high today following news that the Associated Press announced plans to use the Ethereum blockchain for election and sports feeds via the Chainlink network, confirming its differentiation from bitcoin which continues to be viewed solely as a “digital gold” store of value, while Ethereum is becoming the epicenter of decentralized finance and smart contracts, or as Goldman put it, the “amazon of information.”

Not surprisingly, in its initiating coverage of the crypto space, Goldman sees Ethereum eventually overtaking Bitcoin…