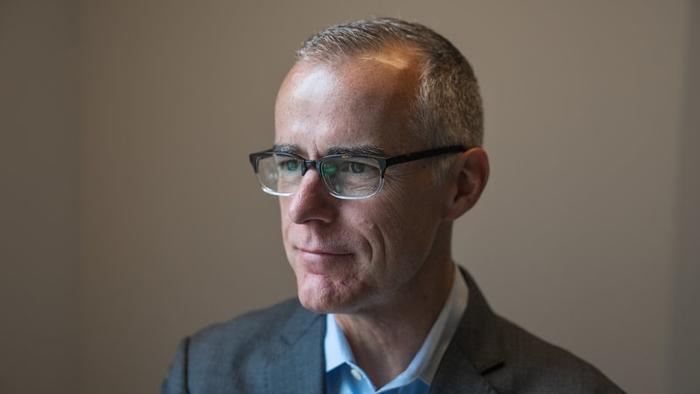 
Andrew McCabe, the disgraced Russiagate FBI agent who lied four times to the DOJ and FBI, will receive his full pension more than three years after he was fired by the Justice Department, according to the New York Times. Under the terms of a settlement stemming from a lawsuit McCable filed in 2019 over his firing, he will also receive around $200,000 in missed pension payments.

The DOJ has also agreed to expunge any mention of his firing from FBI personnel records, and that he would receive special cuff links given to senior executives, along with a plaque bearing his mounted badge and FBI credentials.

The Justice Department did not admit any wrongdoing. But the settlement amounted to a rejection by the Biden administration of how Mr. McCabe’s case had been handled under Mr. Trump, who perceived Mr. McCabe as one of his so-called deep-state enemies and repeatedly attacked him. A notice of the lawsuit’s dismissal was also filed in federal court. -NYT

McCabe’s lawyers will also receive over $500,000 in legal fees, courtesy of the US taxpayer.

McCabe, who was caught lying four times to the DOJ and FBI (twice while under oath) over leaks to the press, was fired in March, 2017 –  days before he was set to receive his full pension.

Specifically, McCabe authorized an FBI spokesman and attorney to tell Devlin Barrett of the Wall St. Journal, just days before the 2016 election, that the FBI had not put the brakes on a separate investigation into the Clinton Foundation – at a time in which McCabe was coming under fire for his wife taking a $467,500 campaign contribution from Clinton proxy pal, Terry McAuliffe.

During a November, 2020 appearance before the Senate Judiciary Committee, McCable dismissed the FBI’s abuse of power under his watch as mere mistakes.

McCabe said he was “shocked” by the “significant number of errors and failures related to the FISA [Foreign Intelligence Surveillance Act] applications” to spy on Carter Page, a former adviser on candidate Donald Trump’s 2016 presidential campaign. His claim was reminiscent of Captain Renault in the film “Casablanca,” who pretended to be “shocked, shocked” at the gambling in Rick’s Cafe as he pocketed his winnings. –Fox News

McCabe also never bothered to speak with Christopher Steele – the former UK spy ultimately paid by the 2016 Hillary Clinton presidential campaign to fabricate a now-discredited dossier designed to smear then-candidate Donald Trump. McCabe knew the dossier was fake before the election and did nothing, claiming he was oblivious to the exculpatory evidence before the agency used the dossier when applying for a surveillance warrant from the Foreign Intelligence Surveillance Court (FISC).

Before Trump’s inauguration in January 2017, McCabe’s agents tracked down Steele’s main source, Igor Danchenko, who promptly discredited the dossier as nothing more than multiple hearsays and rank speculation, some of which emanated from Danchenko’s drinking buddies.

It was also determined that parts of the dossier were likely Russian disinformation and that the Russia Hoax itself was invented by none other than Democratic presidential nominee Hillary Clinton to smear Republican candidate Trump with an alleged scandal.  –Fox News

According to documents produced by the FBI, FBI employees exchanged proposed edits to the draft statement. On May 6, Deputy Director McCabe forwarded the draft statement to other senior FBI employees, including Peter Strzok, E.W. Priestap, Jonathan Moffa, and an employee on the Office of General Counsel whose name has been redacted. While the precise dates of the edits and identities of the editors are not apparent from the documents, the edits appear to change the tone and substance of Director Comey’s statement in at least three respects. –Letter from Sen. Ron Johnson (R-WI)

After he was fired, McCabe said he was “confused and distracted” when he was talking to investigators, and charges were never filed against him. Former Trump National Security Adviser Gen. Mike Flynn was notably not afforded the same luxury.

“I answered questions as completely and accurately as I could. And when I realized that some of my answers were not fully accurate or may have been misunderstood, I took the initiative to correct them,” McCabe wrote in a Washington Post op-ed.

In the wake of his firing, McCabe – an central figure in the Trump-Russia investigation, received over $540,000 from just one of several GoFundMe campaigns.

Rohit Verma and Oris R. Stuart elected to Ameritas board of directors