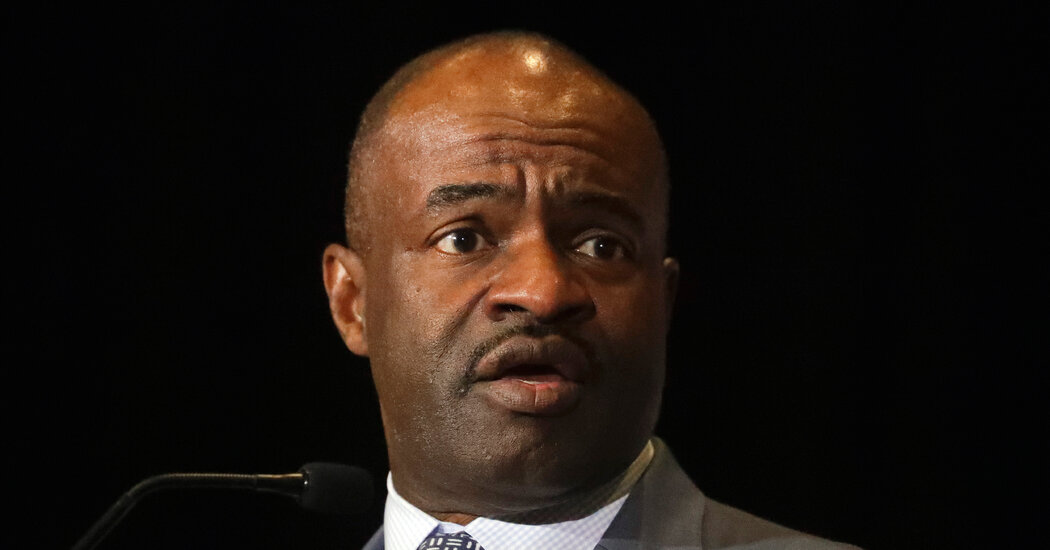 
Jon Gruden, the coach of the Las Vegas Raiders, in 2011 used racist terms to denounce DeMaurice Smith, the executive director of the N.F.L. Players Association, who is Black and has been facing opposition within the union to the extension of his contract.

The email surfaced just hours before the player representatives for the 32 teams voted to give Smith a fifth term as the union’s leader, this time without having to hold a general election. Smith was not endorsed by the union’s selection committee earlier this week, a sign that he was facing unusually stiff opposition within his own ranks. Some players have accused Smith of being too conciliatory to the league.

There is reason to believe the league’s owners prefer that he stay, and such an inflammatory email, first reported by The Wall Street Journal and confirmed by The New York Times, complicated the vote for players who opposed Smith.

While Smith has been combative with the N.F.L. at times, he is viewed favorably by many owners who worked closely with him last season to get the players back on the field during the pandemic.

The email was written in 2011 in an exchange between Gruden, who is white and was an analyst for ESPN at the time, and Bruce Allen, who was then the president of the Washington Football Team.

“Dumboriss Smith has lips the size of michellin tires,” Gruden wrote about Smith in the exchange.

The email was discovered during a review of workplace misconduct at the Washington Football Team that ended this summer. During the past few months, the N.F.L. commissioner, Roger Goodell, told league executives to look at more than 650,000 emails, including the one that included Gruden’s comment. This week, the executives presented a summary of that review to Goodell and shared with him the Raiders emails pertaining to Gruden.

“The email from Jon Gruden denigrating DeMaurice Smith is appalling, abhorrent and wholly contrary to the N.F.L.’s values,” Brian McCarthy, a league spokesman, said in a statement.

The league declined to say whether Gruden could face disciplinary action.

Smith said in a statement that Gruden’s comments are symptomatic of the challenges that Black Americans face.

“You know people are sometimes saying things behind your back that are racist just like you see people talk and write about you using thinly coded and racist language,” said Smith, who took over as the union’s executive director in 2009. “Racism like this comes from the fact that I’m at the same table as they are and they don’t think someone who looks like me belongs.”

Mark Davis, the Raiders’ owner, called Gruden’s email “disturbing and not what the Raiders stand for.” He added that the team first learned about the email on Thursday and is reviewing “it along with other materials provided to us today by the N.F.L.”

“We are addressing the matter with Coach Gruden and will have no further comment at this time,” Davis said.

Gruden said that he did not recall the email, but acknowledged that in 2011, he was angered by the stalled labor talks between the league and union which led the owners to lockout the players.

“I probably looked at De as the villain,” he told The Athletic on Friday. “And I was really upset that there was going to be a lockout.”

He added that “I went too far calling him the Michelin lips. I never had a blade of racism in me” and that he “used a terrible way to insult a guy.”

Gruden said he called Smith but had not heard back.

Gruden was working in 2011 as an analyst for “Monday Night Football,” three years after leaving a head coaching job at the Tampa Bay Buccaneers. In 2018, he signed a 10-year contract to coach the Raiders, when the team was still playing in Oakland, Calif.

Smith has been facing the biggest challenge to his leadership in his 12 years running the union. On Tuesday, the union’s selection committee deadlocked, 7-7, on whether to give Smith a new contract and a fifth term. Four years ago, that same committee voted unanimously to extend Smith’s tenure.

Smith just barely won the two-thirds approval of the 32 team representatives he needed to avoid an open election, which could have led to more turmoil at the union and undermined what has generally been a cooperative relationship with Goodell. In the vote, 22 players voted to extend Smith’s contract, eight opposed it and two abstained. In a sign of ambivalence about his leadership, Smith may only get a short term contract, not a four-year agreement.

After the vote, J.C. Tretter, a center on the Cleveland Browns and the union’s president, said in a statement that Smith “was transparent with us about his interest in moving on after this term and for the stability and security of our union, he will work with our player leadership to ensure we have a succession plan in place for the next leader.”

Tretter did not say when Smith made the decision to leave after his term expires, or how long his term would last.

The opposition to Smith stems from lingering resentment over the 10-year labor agreement that the players ratified in March 2020, just as the coronavirus pandemic gripped the country.

Richard Sherman, now on the Buccaneers, and other veteran players were disgusted that Smith, who initially opposed the owners’ insistence on the addition of a 17th game this season, ended up supporting it.

The union’s own executive committee — normally a source of support for Smith — voted against the deal. But the union pressed ahead anyway, and the agreement was ratified by just 60 votes, receiving 51.5 percent of the vote among a group with more than 2,000 members.

Some players were unhappy that the union only clawed back an additional percentage point of the league’s revenue from the owners in return for a 17th game. Others noted that there is no mechanism to reopen the deal before it expires in 2031, which some players see as an owner-friendly concession. The union also agreed to cut benefits to roughly 400 former players on permanent disability, a decision that Smith later had to justify.

Additionally, some players were upset that the union’s leadership rubber-stamped Smith’s last extension and wanted to at least hold an open election to consider other candidates.

“For the players, this may signify a long period of dissatisfaction with a C.B.A. that wasn’t all they hoped for,” said Robert Boland, who teaches a course on collective bargaining in professional sports at Penn State University. “This has turned into a referendum on Smith’s 12-year tenure.”

Boland represented Russell Okung, a member of the executive committee who last March accused Smith and the union’s staff of acting in bad faith by forcing a vote on the labor deal over the objections of the committee, in violation of the union’s constitution. Okung also accused the union’s leadership of trying to muzzle him from speaking out about the lack of transparency about the committee’s negotiations with N.F.L. owners, which began in 2019.

Okung asked the National Labor Relations Board to intervene, but the independent federal agency guarding employee rights turned him down. His filing, though, turned out to be a harbinger of the discontent that carried into 2021, well before Gruden’s email surfaced.