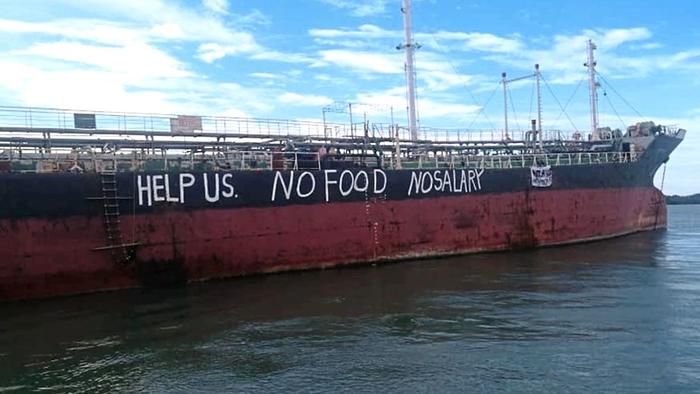 
Pandemic-driven global trade disruptions and an increasing number of shipping companies abandoning their own vessels over mounting debts including older vessels deemed too costly to repair has led to the rise in the phenomenon of crewmembers simply being abandoned at sea, often left to fend for themselves as they await pay which sometimes never comes.

A Friday investigative report in The Wall Street Journal has detailed some of the shocking stories of tanker crew members left adrift after companies abandoned vessels or sold or transferred them, or couldn’t pay mounting debts, while trying to survive oftentimes on little food even while moored close to resort locations in places like Dubai – or in other cases floating off the Suez Canal or at Black Sea ports.

“The $14 trillion shipping industry, responsible for 90% of world trade, has left in its wake what appears to be a record number of cargo-ship castaways,” the report begins. “Abandonment cases are counted when shipowners fail to pay crews two or more months in wages or don’t cover the cost to send crew members home, according to the International Maritime Organization, a United Nations agency.”

The UN agency recorded a doubling in the number of abandonment cases for 2020, with the number expected to grow once again for 2021 particularly after a noticeable surge in cases now getting media attention.

WSJ cites the industry labor union, International Transport Workers’ Federation, to detail that over 1,000 international crew members are currently abandoned. But the report assures the true number of those left aboard container ships and bulk carriers whose transport operations have been halted is likely way higher, given individual crew members’ reluctance to come forward for fear of not getting hired by other freight companies.

Though most of those who effectively overnight became “castaways” choose to stay aboard abandoned ships until they get paid, in many cases they legally cannot disembark even if they wanted to due to complex local laws dictating policies of many ports. The Wall Street Journal explains:

Some governments require sailors to remain aboard as guarantors until shipowners pay port authorities for berth fees and other charges. More often, sailors refuse to disembark, convinced they will never recoup months or years of lost wages if they leave. Seafarers stuck on board generally borrow money from friends and family to feed themselves and crewmates.

Many say they will stay put until the ship is sold for scrap, which can take years, rather than go home empty-handed.

Some survive for up to a year on rice and water, or perhaps the goodwill and care packages of nearby ships and people on land, and others might stay put for literally years. The report noted that one engineer aboard a stranded tanker on the Black Sea has been there for four years.

This is a stunning story about the ugly realities in shipping. The numbers of seafarers abandoned is growing, exacting a terrible human toll. “We cannot survive here.” https://t.co/jOLtH8OwRa via @WSJ

Abandoned seafarers have described the ships as turning into a “prison” and a “slave ship”. One ongoing saga off Romania in the Black Sea involves four crewmembers awaiting the resolution of a high level Romanian court case to determine who is responsible for payment of debts involving the ship’s owner. Legally they simply aren’t allowed off the vessel. In some instances the WSJ documented stories of unpaid workers contemplating suicide. Some of them literally face starvation, and in these instances sometimes attract the help of local charities.

Moored ships hit by storms with crew aboard – yet not able to disembark – is another example of some of the more dramatic and immediate threats to safety these workers face. And then there’s this instance noted in the WSJ report: “Off the coast of Yemen, one of the world’s largest oil supertankers, laden with 1.1 million barrels of crude, sits decaying in a war zone. An errant rocket or the ship’s corroding steel hull could trigger an explosion and massive spill.”

Currently, there are efforts underway among a handful of large nations – namely China, Indonesia and the Philippines – whose ships make up the bulk of international sea freight traffic, to establish an ‘abandonment fund’ to help with emergency assistance for stranded crew. However, it could encourage companies to continue shrugging off responsibility, as is still continually happening according to the report.