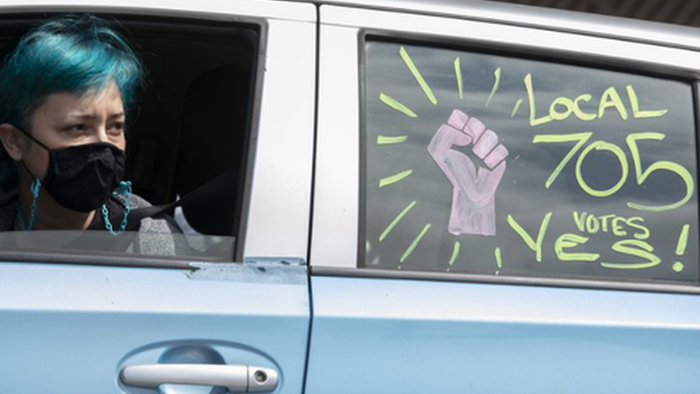 
Members of Hollywood’s International Alliance of Theatrical Stage Employees have authorized its union to strike over the weekend.

The decision comes after “months of failed negotiations” between the union and the Alliance of Motion Picture and Television Producers, CNBC reported this week.

Matthew Loeb, president of IATSE, said in a statement Monday: “The members have spoken loud and clear. This vote is about the quality of life as well as the health and safety of those who work in the film and television industry. Our people have basic human needs like time for meal breaks, adequate sleep, and a weekend. For those at the bottom of the pay scale, they deserve nothing less than a living wage.″

This means a strike is now on the table if talks break down further. It marks the first time the IATSE has authorized a strike, with over 90% of eligible ballots cast and about 98% of voters authorizing the strike.

“We deeply value our IATSE crew members and are committed to working with them to avoid shutting down the industry at such a pivotal time, particularly since the industry is still recovering from the economic fallout from the COVID-19 pandemic,” the AMPTP responded.

Recall, we wrote days ago about how negotiations were breaking down.

The union has a membership of about 60,000, most of whom are based in Los Angeles. They are threatening to walk off the job, should the union’s leadership – which is countrywide – decide. This means that a strike would affect studios across the U.S., not just in Los Angeles.

In total, 1 million jobs “directly tied to film and TV production” could be affected.

Alongside of a historic labor shortage coming back from the pandemic, production has been on the rise as the studio arms of companies like Netflix and Amazon look to build out their content. Both Netflix and Walt Disney have told shareholders that the lack of new content has been a headwind for streaming sign-ups.

The Alliance of Motion Picture and Television Producers says it “put forth a deal-closing, comprehensive proposal that meaningfully addresses the IATSE’s key bargaining issues.”

But the union isn’t amused. It wrote to its members: “As you may be aware, negotiations with the major producers have reached a standstill. They refused to reply to our last proposal.”

The union is pushing for rest and meal breaks, as well as higher pay for its lowest earners, some of whom only make $15 per hour.