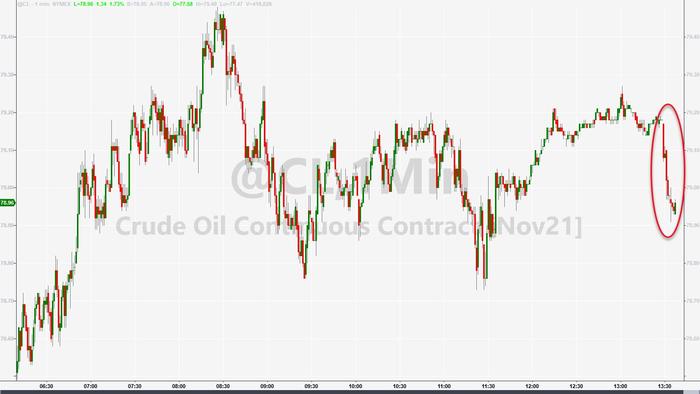 
Oil prices extended their gains today (WTI at hits highest since 2014 and Brent at three year highs), after the OPEC+ group of producers agreed yesterday to stick to its planned output increase rather than raising it further.

“The market is realizing we are going to be undersupplied for the next couple of months and OPEC seems to be happy with that situation,” said Phil Flynn, an analyst at Price Futures Group in Chicago.

Additionally, rocketing global natural gas prices, which may incentivize some power generators to switch from gas to oil, mean crude prices are likely to remain supported even though there could be a short-term pullback, said Gary Cunningham, director of market research at Tradition Energy.

“I think there will be some profit-taking … but we are going into winter with very high natural gas prices,” Cunningham said, adding that he expects Brent will find support around $80 and WTI in the mid-$70s.

Saudi Aramco said on Monday that they see switching from Natural Gas to Crude Oil of 500,000 bpd. Who can blame them…

After last week’s surprise inventory builds across the crude complex, analysts expected a modest 300k barrel draw this week but again they were wrong as API reported a small crude build (and builds for Gasoline and Distillates)

WTI hovered around $79.20 ahead of the print and dipped back below $79 after…

“The price surge comes as fears of depleted supply have stoked panic around the globe,” Lindsey Piegza, Stifel’s chief economist, said in the note.

“India, for example, has warned it has only four days of coal reserves left, while reports suggest German power plants are running out of fuel. China also reportedly just received an Australian coal shipment despite an import ban.”

However, the increase in energy prices could push up inflation and force the Federal Reserve to start raising interest rates sooner than it currently expects, Stifel said.

“Against the backdrop of elevated inflation and rapidly rising energy costs, many market participants are skeptical the FOMC will be able to maintain these low rates for another year, let alone two,” Piegza wrote.

On top of that average daily crude production in the US is about 7% lower than last year.