Tech company Snowflake (NYSE:), went public in September 2020 at an opening price of $230.76. Shares of the Montana-based cloud computing-based data warehousing company closed at $293.80 on Sept. 29, which means that in the last year the stock gained about 25%.

The company increased its forecast for FY21 product revenue growth. Investors were also pleased to see Snowflake has almost 5,000 clients. Of those, 116 have each contributed more than $1 million in revenue in the past 12 months.

Before the quarterly announcement, SNOW stock was trading around $285. On Sept. 17, it hit an intraday high of $328.06. However, since then the shares have come under pressure and lost around 11%.

Next Move In SNOW Stock?

Among 29 analysts polled via Investing.com, SNOW shares have an “outperform” rating, with an average 12-month price target of $324.88. Such a move would imply an increase of about 10% from the current level. The target range is between $250 and $515. 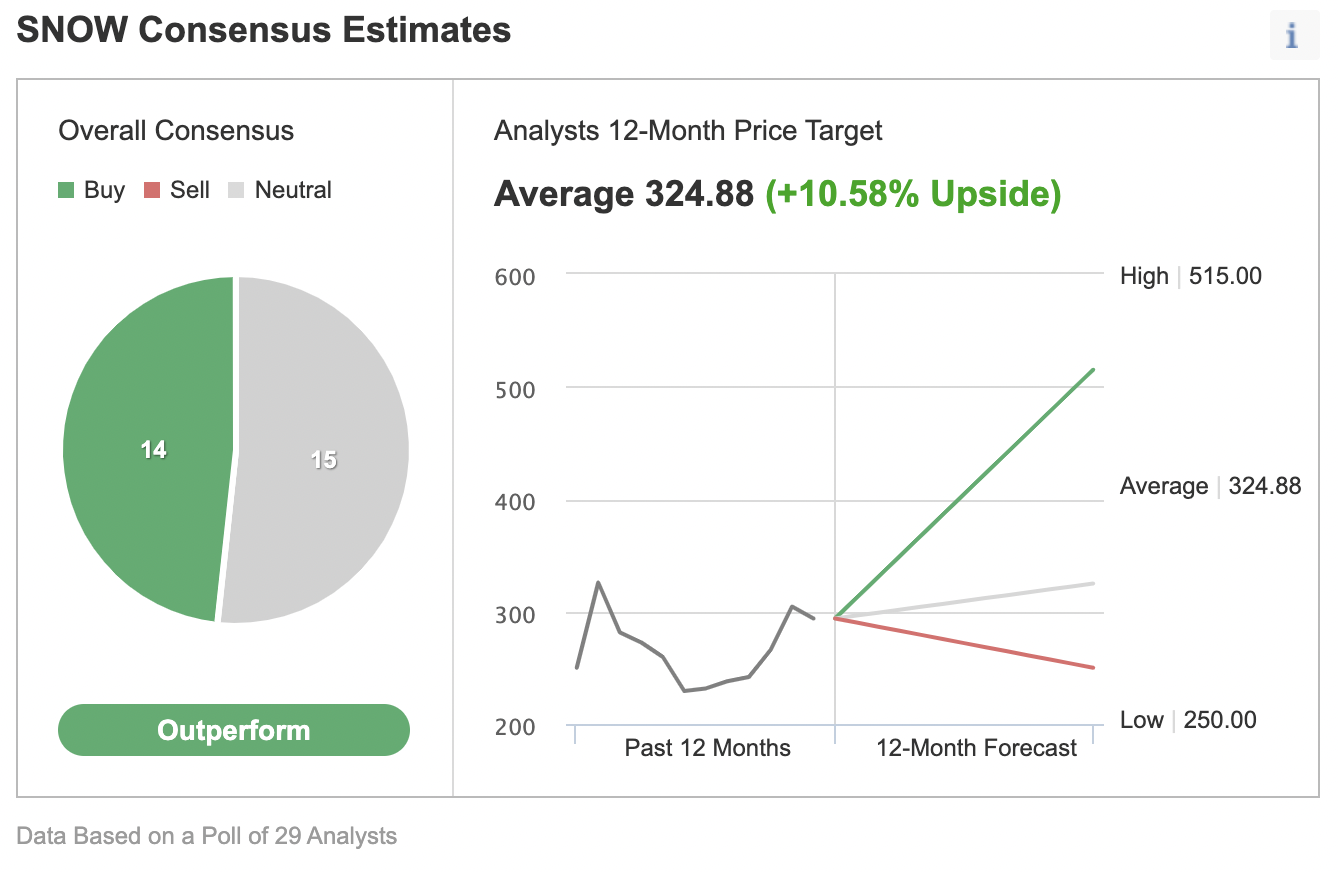 In other words, Wall Street is optimistic about the long-term move in SNOW stock despite the recent choppiness. Thus, a number of investors might consider buying the stock for their long-term portfolios. But investing in 100 shares of Snowflake stock would cost around $29,380, a considerable investment for most people.

Meanwhile, others could still be nervous about how far the stock could potentially fall before making a new bull leg up. Therefore, some investors might prefer to put together a “poor person’s covered call” on the stock instead.

So, today we introduce a diagonal debit spread on SNOW by using LEAPS options, where both the profit potential and risk are limited. Such a strategy could be used to replicate a covered call position at a considerably lower cost, and also help decrease the portfolio volatility.

Investors who are new to options might want to revisit our previous articles on LEAPS options first (for example, and ) before reading further.

Thus, the call options for the underlying stock have different strikes and different expiration dates. The trader goes long one option and shorts the other to make a diagonal spread.

In this strategy, both the profit potential and risk are limited. The trader establishes the position for a net debit (or cost). The net debit represents the maximum loss.

Most traders entering such a strategy would be mildly bullish on the underlying security. Instead of buying 100 shares of SNOW, the trader would buy a deep-in-the-money LEAPS call option, where that LEAPS call acts as a “surrogate” for owning the stock.

The delta of this option is close to 80. Delta shows the amount an option’s price is expected to move based on a $1 change in the underlying security.

If SNOW stock goes up $1 to $294.80, the current option price of $113.35 would be expected to increase by approximately 80 cents, based on a delta of 80. However, the actual change might be slightly more or less depending on several other factors that are beyond the scope of this article.

For the second leg of this strategy, the trader sells a slightly out-of-the-money (OTM) short-term call, like the SNOW 17 Dec. 2021 300-strike call option. This option’s current premium is $20.70. The option seller would receive $2,070, excluding trading commissions.

There are two expiration dates in the strategy, making it quite difficult to give an exact formula for a break-even point in this trade. Different brokers might offer “profit-and-loss calculators” for such a trade setup.

Calculating the value of the back-month option (i.e., LEAPS call) when the front-month (i.e., the shorter-dated) call option expires requires a pricing model to get a “guesstimate” for a break-even point.

Here, the maximum return, in theory, would be about $2,430 at a price of $300 at expiry, excluding trading commissions and costs. (We arrived at this value using an options profit-and-loss calculator). Without the use of such a calculator, we could also arrive at an approximate dollar value. Let’s take a look:

However, in practice, it might be more or less than this value. There is, for example, the element of time decay that would decrease the price of the option. Meanwhile, changes in volatility could increase or decrease the option price as well.

Understandably, if the strike price of our long option had been different (i.e., not $220.00), its delta would have been different, too. Then, we’d need to use that delta value to arrive at the approximate final profit or loss value.

Here, by not investing $29,380 initially in 100 shares of SNOW, the trader’s potential return is leveraged.

Ideally, the trader hopes the short call will expire out-of-the money (worthless). Then, the trader can sell one call after the other, until the long LEAPS call expires in about a year and half.

High growth technology stocks typically need fast revenue growth and strong customer retention—two catalysts that Snowflake has. Management believes it can reach $10 billion in product revenue by the end of the decade.

As such, we find SNOW stock to be a solid choice for most portfolios, either as a buy-and-hold investment or as part of a trading strategy example given above.