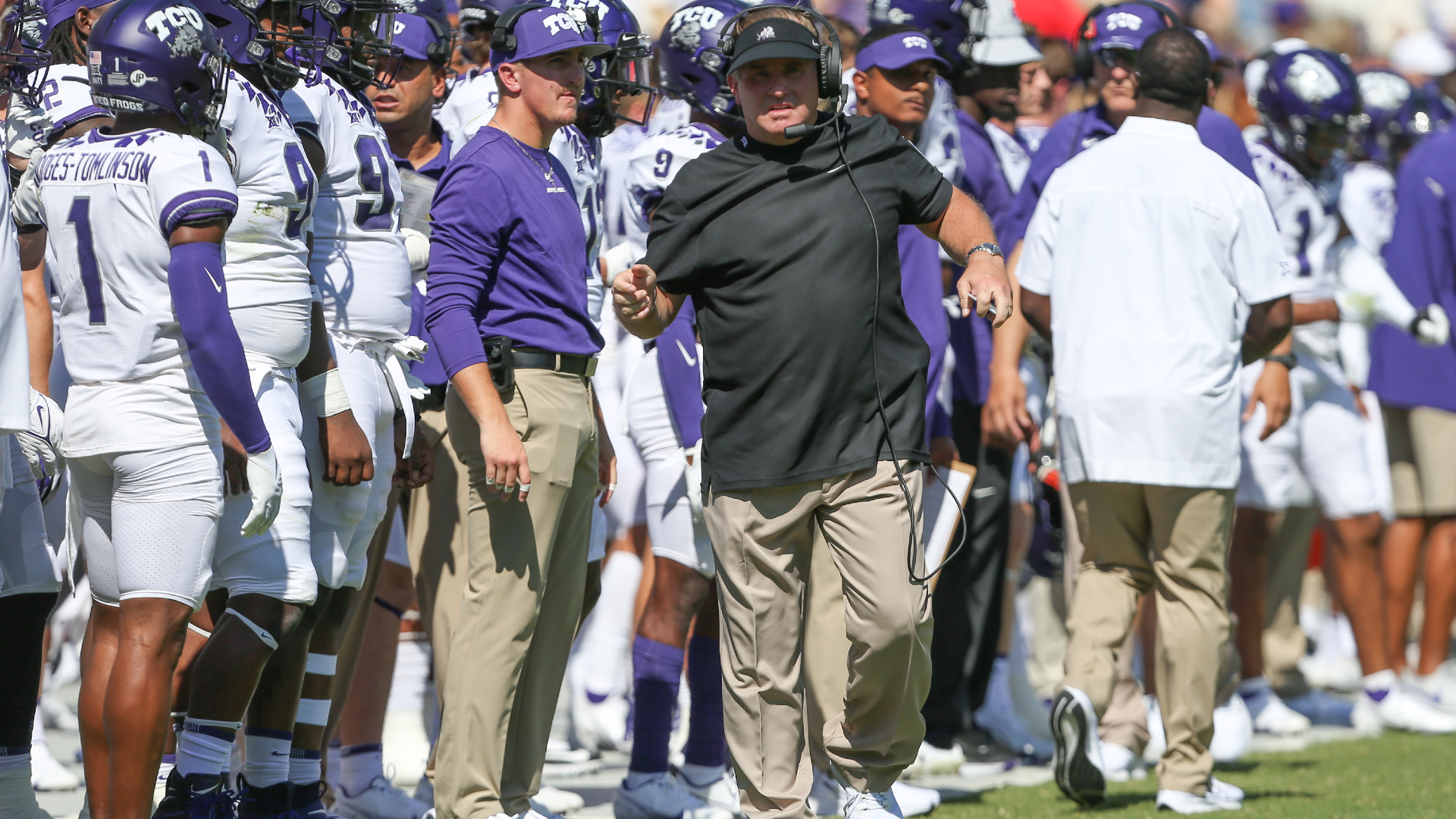 TCU coach Gary Patterson unloaded on SMU on Tuesday, blaming the Mustangs for a postgame scuffle between the two teams’ players that led to assistant coach Jerry Kill getting concussed.

In particular, Patterson claimed SMU orchestrated an attempt to plant its flag at midfield of Amon G. Carter Stadium following its 42-34 win over TCU in the 100th Battle of the Iron Skillet. He believes that directly led to Kill getting knocked over and concussed.

SMU WR Rashee Rice, the one fueled the rivalry with his comments this week, immediately takes the SMU flag to midfield after SMU’s 42-34 win over TCU. A small scuffle ensues. pic.twitter.com/kO0xxpktv9

“You don’t think it was planned?” Patterson said of the flag-planting attempt, according to the Star Telegram (Fort Worth, Texas). “They had a media person from their office that was out filming the flag getting set in the middle of the field. … A guy (Kill) got hurt. He got pushed down by our kids once on film in the middle of it and he got hit, because I’ve got the proof to show it.”

Per Patterson, Kill was knocked down twice and suffered a concussion, though the former admitted he wasn’t sure who led to him getting knocked down the second time. He also said an SMU player struck him with their helmet.

“I do need to find out who the player is that hit Coach Kill with a helmet is,” Patterson told reporters postgame of the alleged incident. “I will find that out.”

Below is a video of someone appearing to be Kill falling down, though it’s uncertain whether it is the first or second time; no SMU players were around when he fell over.

This *appears* to be the point where Jerry Kill is knocked down. This is from the video I took yesterday. You can see a TCU coach in white fall down between the C and the U on the 45-yard line. Doesn’t look like anyone from SMU is around him. pic.twitter.com/0KvKo05gUg

Kill, 60, has epilepsy, which he was diagnosed with in 2005. He remained a Division I head coach until 2015 when he resigned from Minnesota amid health concerns. He went 107-77 at the Division I level, splitting time between FCS and FBS, but hasn’t held a head coaching gig since leading the Golden Gophers. Patterson said he is OK and has since returned to work.

Even if Patterson didn’t know who was responsible for injuring Kill, he was happy to lay the blame.

“I cannot substantiate that it was a SMU or TCU person, but it did happen,” Patterson said during a Tuesday news conference. “If we wouldn’t have had the flags, it wouldn’t have happened. OK?”

Coaches double down all the time but, in the case of Patterson, it came after assurances were made by TCU athletic director Jeremiah Donati that Patterson would walk back his comments.

SMU athletic director Rick released a lengthy statement in response to Patterson’s claim, part of which was posted online by the Star Telegram:

“While Coach Patterson acknowledged that his postgame claim cannot be substantiated, he accused our program, multiple times, of planning to plant our flag on the field following our win. This is a complete fabrication,” Hart’s statement said. “I can state unequivocally that there was no such plan.

This activity was spontaneous and borne out of emotion,” Hart’s statement continued. “To suggest otherwise is irresponsible and offensive. I will not allow Coach Dykes, our program or our student-athletes to be unjustifiably attacked. Sonny is a tremendous leader and a man of great integrity.”

MORE: College football picks against the spread for Week 5

Immediately following the game, SMU coach Sonny Dykes denounced the incident, though he declined to comment on what Patterson said on Tuesday.

“I feel bad for that. I apologize for that. … I hope (the flag planting) didn’t happen, but if it did, we’ll make sure it doesn’t happen again. Like I said, that’s certainly not out of a lack of respect for TCU. Our players feel the same way I do.”

Dykes spent the 2017 season as an assistant on Patterson’s staff, and so Patterson was also annoyed that the athletic directors had to get involved and that Dykes didn’t reach out to him personally. Patterson said he was willing to put the incident behind him and remain friends with Dykes.