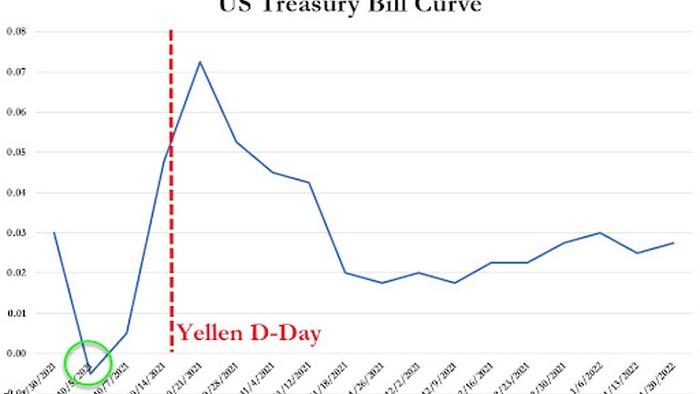 
Now that we know that the debt ceiling “drop-dead date” will fall on (or around) October 18, as per Janet Yellen’s latest letter, attention turns to what’s next. As readers know, the bond market is showing signs of concern around the D-date, with the T-Bills kink peaking today just after the Oct 18 data.

But the bigger question is how will Congress extricate itself from Biden’s game of debt ceiling chicken which we discussed recently.

Before we get into the most likely scenarios, Goldman’s Alec Phillips reminds us that a complicating factor is that the House is scheduled to be in recess after Oct. 1 until Oct. 18, and the Senate after Oct. 8 until Oct. 18.  House Democratic leaders already suggested that some of that recess might need to be cancelled, and that looks more likely in light of this deadline.

So turning to Congress, following yesterday’s failed Senate vote on the continuing resolution (CR) and debt limit suspension, Goldman notes that Democratic leaders will now need to decide whether to bring a “clean” CR to the floor that omits the debt limit, something which Nancy Pelosi said this morning is “the plan”. Goldman thinks that such a vote could happen potentially as soon as today, as it seems to be only way to avoid a shutdown in light of likely continued Republican opposition to a CR paired with a debt limit suspension.

So looking at the upcoming calendar, Goldman observes that the main question is whether to extend spending authority until around Oct. 18, aligning the two deadlines, or to pass the same CR the Senate just blocked (minus the debt limit suspension), which lasted until Dec. 3.

The latter approach also requires some lead time, as it would mean first passing a revised budget resolution in the House and Senate, followed by a reconciliation bill raising the debt limit, which would also need to pass both chambers.According to Phillips, that would likely take at least a week, though the closer to the deadline the process starts, the more likely it is that Republicans would agree to waive some of the required time for debate. If so, Democratic leaders seem incentivized to let the clock run down before acting.