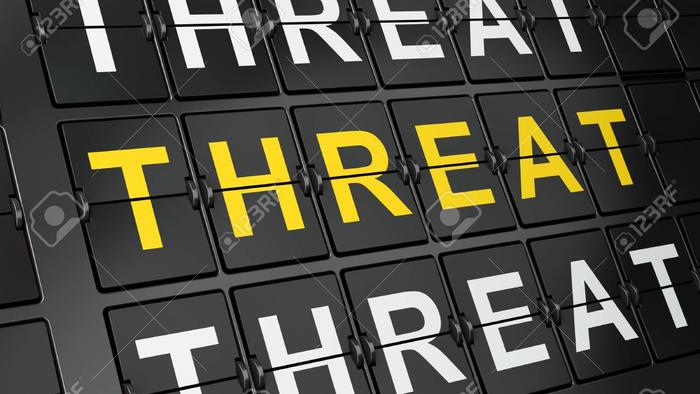 “Many people have speculated that if we knew exactly why the bowl of petunias had thought that we would know a lot more about the nature of the Universe than we do now.”

Markets are never as bad as you fear, but never as good as you hope. The Threat Board has seldom looked so complex: we can try to predict outcomes, but its notoriously difficult. The list of potential ignition points seems to be expanding exponentially: Energy Prices, Oil, Inflation, Stagflation, Supply Chains, Recession, China, Politics, Consumer Sentiment, Business Confidence, Property Markets, Liquidity, Bond Yields, Stock Prices.. you name it and someone is worrying about it.

Looking at the Threat Board this morning, the list is getting long – and worrisome. There seem to be so many dangers points about. It’s pretty easy to identify each of the multiple threats – just listen to too much BBC and read the financial press.

The trick is being able to put them together in a coherent explanation of where they are likely to take markets. It’s the linkages, contagion vectors and consequences of how the burgeoning threats inter-react that are so difficult to fathom – which maybe explains why I’m so fascinated by the new Apple TV dramatization of Issac Asimov’s Foundation Trilogy. (I first read it back in the 1970s… I didn’t get it.)

Asimov’s Foundation books are more about political economy and sociology than “we-come-in-peace/shoot-to-kill” science fiction: A very clever mathematician innovates a new science based on the analysis of statistics to predict the future action of humanity’s vast Galactic Empire – concluding it’s about to crumble and fall into a new dark age. Ever since Adam Smith wrote The Theory of Moral Sentiments and The Wealth of Nations, economists have always been looking for the General Theory of Everything to explain how society works, and how to manage it.

However carefully we try to winnow the data, connect the dots, and refine the inputs, the answer is usually 42.

Let’s look at the Threat Board

Instead, I shall make a strong cup of tea and prepare to surf the coming storm – if it arrives, secure in my view the global economy and markets are a self-regulating almost living thang with a perverse sense of balance – when markets explode they throw up as many opportunities as they destroy. So… don’t worry about imminent disaster and downside destruction in stocks – go figure how to play the upside which is sure to follow.

As oil hits $80, is it a surprise oil prices are spiking higher? The supply/demand imbalance across energy markets is extreme – triggered by pre-winter demand, the realisation supplies are insecure, and a growing sense of market distortion. It’s usually a distortion that creates market outages.

So, congratulations to the ESG obsessed millennials now sitting in CIO roles who’ve refused to fund a sensible transition programme from fossil energy to renewables. The result of their blanket ban on any fossil investments is a long-term supply/demand imbalance and higher prices in the least bad fossil fuel; Gas – which in turn pushes Energy companies down the list to the stage where coal looks like a cost-efficient compromise to meet spiking energy demands! We’re seeing the downstream effects in China, where a scarcity of even coal is driving energy prices higher in an already wobbling economy. We’re seeing it in Europe… Perhaps the US may do better.

Energy prices are likely to remain elevated for years as we try to balance the climate change imperative against the need for energy during the transition period. Problem is lots of talking heads have made a career out of climate change (which is real) and will take time to accept the implications of no oil today are worse than higher temperatures tomorrow. Don’t expect COP26 to announce more sensible transition policies.

Global Climate Change will be long-term destabilising – and we’re likely to see climate instability and flash events become increasingly common. I rather suspect COVID-19 was a dress-rehearsal for what’s to come in terms of even larger emergency government fiscal and monetary policy responses. The need for government spending to ameliorate climate change will undo any efforts to scale back govt debt. That creates all kinds of danger – not least being confidence in fiat money and government.

More immediately, as the Bank of England warns interest rates may rise this year, and the Fed gives mixed messages, bond yields are spiking higher in reaction to rising rates, imminent taper and the growing sense that inflation/stagflation is increasingly inevitable. It’s the beginning of a distortion unwind, but it’s also going to accelerate the transfer of the accumulated inflation of the last 12 years in financial assets back into the real economy.

There are a deal of additional risks – not the least being bond market illiquidity as massively overvalued corporate bond markets go “offered only”, and even in Treasuries where some recent worrying signs highlight a lack of oomph behind dealers. The central banks have become de-facto buyers of last resort – there is zero marketing making capacity from banks. Just like the stock market, which famously has 27 grand double doors saying “Welcome”, the bond market has a very small, dimly lit corridor leading to the only exit sign.

(But do remember – when all around are losing their heads and hitting any bid in a falling bond market, that’s the time be thinking of buying good bonds at distressed prices! In crisis, the market overreacts on the downside.)

The links between rising rates, economic slowdowns, and consumer confidence will be felt most strongly in the housing markets. Around the globe housing prices are “toppy”. Add in a degree of government policy to address income-inequality through taxation policy to make rentals less attractive and force the sale of housing units, and we could be looking at a major housing stumble. Typically, a housing crash corrects fairly swiftly, but is about the most damaging factor to hit consumer confidence.

As rates rise and it becomes clearer cheap bond markets driving down risk returns have fuelled the last 12 years of stock market upside, there is rising imbalance risk. There are market metrics showing stocks to be fundamentally fairly priced, but stock prices are as vulnerable to market uncertainty as any asset class.

Apparently, I only got it partially right yesterday when I said the shortage of Lorry (HGV) Drivers here in the UK is due to it being a crap, badly paid job. The UK is short 100,000 drivers. It hasn’t helped that the Driver Vehicle Licensing Authority (DVLA) has been sitting on 40,000 HGV licence applications, stopped HGV driver tests, and even went on strike over Covid safety measures through the pandemic. With a large proportion of UK lorry drivers in their 50s and 60s and due to retire, the shortage of drivers is a long-term issue, that’s not going to be fixed by 3 month temp visas for foreign drivers.

Read the headlines and its everything from global auto-chains, tech, steel and chemicals that are in short-supply and triggering knock on-shortages.  If consumers can’t consume – as I wrote yesterday their insecurities are rising, inflation is testing them, and confidence is declining – and companies can’t sell – go figure the likelihood of recession versus recovery.

Apparently German Politics don’t matter – Europe will remain stable no matter how long it takes a coalition to be agreed. We’ve got French elections next year and I’m told anyone but Macron is the likely result. And here in the UK Boris can do absolutely nothing wrong because the opposition Labour Party (disclosure: I support them) is determined to shoot itself in the foot whenever an opportunity to do so presents itself. Who cares?

The USA is a much larger concern. Gridlock is nailed on. The chances of a US default look low, but it could occur if the GOP continues to block legislation to raise the debt ceiling, while economy recovery could be held back years if the Dems can’t get the act together to move forward on the infrastructure programme. While both parties remain convinced the only way for America to move forward is by destroying the other, then the prospects for US economic leadership will remain depressed.

Are people paying attention to the IMF’s views on Global Growth? Apparently Janet Yellen won’t take a call from IMF head Kristalina Georgieva after accusations she manipulated the World Bank’s “Doing Business Report” to improve China’s standing. Its noise, but a distraction from the reality China’s growth could take a pasting after Evergrande. A slowdown in China will trigger a substantial global recession wave.

Do I even need to mention it…? If feels like Winter is Coming and the Wildlings are over the wall…

What Types of Vehicles Come with Higher Car Insurance Premiums