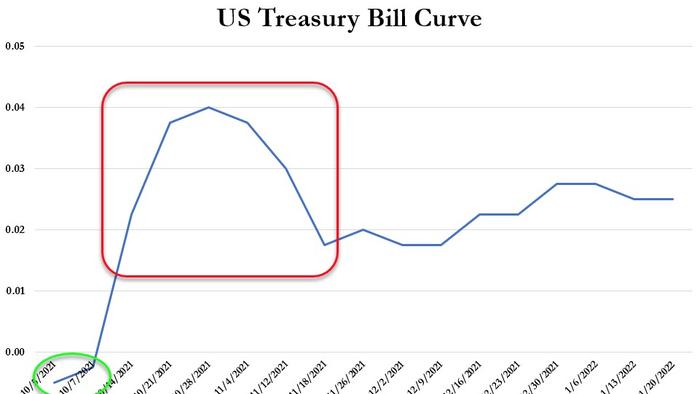 
Having detailed the ‘debt limit game of chicken’ last week, tonight’s vote in the Senate is exactly what was expected.

Senate Republicans on Monday voted down the House-passed bill to fund the government through Dec. 3 and raise the debt limit.

The final vote was 48-50, with Senate Majority Leader Chuck Schumer (D-N.Y.) changing his vote from Yes to No so he could later bring the bill back up for a vote. All Republicans voted against the bill as expected.

Senate Minority Leader Mitch McConnell (R-Ky.) has said he will vote for the “clean” continuing resolution if Democrats’ move forward with that plan.

Congress is now just 72 hours away from a potential shutdown, and as Goldman’s Alec Phillips wrote today, assuming that Republicans do not vote for a debt limit suspension in the near-term, this seems likely to come to head in the second half of October.

The deadline is not entirely clear, but we think it is most likely to fall in late October.

We expect the Treasury to provide a specific projection sometime after Oct. 1.

A deadline still a few weeks off makes it less likely that Congress will deal with it in the coming week.

If not, the debt limit is likely to get tangled up in other issues later in October, including another shutdown deadline (if Democrats decide to extend spending authority for a few weeks instead of a couple of months) and the debate over the pending fiscal packages.

The most likely scenario seems to be that Democrats will need to pass a debt limit increase via the reconciliation process with only Democratic votes, but there are several procedural and political disadvantages to doing this.

With no attractive options, it is hard to see Congress acting on the debt limit until the deadline for action seems imminent.

We can already hear the virtue-signaling cries from Schumer and Pelosi over the fact that Republicans are about to plunge America into its darkest period of history ever (well at least since the January 6th amble-around-the-Capitol). To pre-empt those anguished comments, here is Nancy Pelosi herself from January 2018…

Let’s be very clear: the reason Congress is facing another stop-gap spending bill is because of @HouseGOP & @SenateGOP incompetence. They must stop governing from manufactured crisis to crisis, & work with Dems to pass the many urgent priorities of the American people. #DoYourJob

This is the first time in recent memory that a government shutdown has been possible when one party — one party — has controlled the White House, House, & Senate. The Republicans own that. #DoYourJob