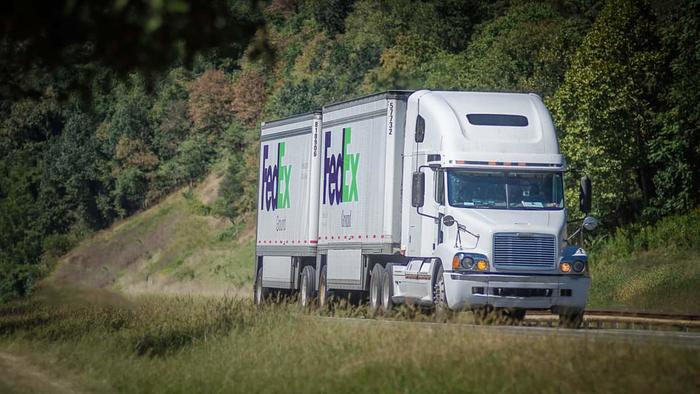 
By Mark Solomon of FreightWaves,

The hole that FedEx finds itself in is, in some respects, not of its own digging. It can’t force people to accept job offers, nor can it control the wages its competitors are willing to pay. It can’t stop or slow the unprecedented surge in parcel-delivery volumes that have pulled forward demand projections by nearly three years.

What the Memphis, Tennessee-based giant can manage is the optics behind its competitive response, and how it addresses customer expectations in the process. Therein lies its dilemma. It is no secret that FedEx is plagued with service reliability issues, with about 600,000 daily shipments in its Ground network, or roughly 5% of the unit’s daily volume, being affected by capacity constraints caused by labor and equipment problems. It is struggling to get on top of costs that, in its fiscal 2022 first quarter, spiked by $450 million over the year-earlier period.

However, raising prices to recoup cost inflation, and doing so in an effort to boost profit in an environment of supertight capacity, are two different approaches. According to some industry experts, the impression being formed in the minds of seasoned shippers — many of whom are decadeslong FedEx customers — is more of the latter than the former.

“For the past 18 months, FedEx has made it clear that its moves are not designed to offset costs but to enhance margin,” said Joe Wilkinson, vice president of transportation consulting for enVista, a supply chain management consultancy. “There are shippers who’ve been at this for 10, 15, 20 years, and they have very long memories.”

Rob Martinez, founder and co-CEO of consultancy Shipware LLC, said he was told by shippers at last week’s Parcel Forum in Washington that they have either been slapped with off-contract rate increases or “are living in fear of pending increases.” New delivery surcharges and increases to existing surcharges are coming fast and furious because, unlike rate increases, surcharges are harder to be discounted away during contract negotiations, Martinez said.

Martinez said FedEx is “hastening its own demise” by raising prices and not delivering reliable service while its shippers clamor for alternatives. FedEx is “playing a short game” in a world where relationships are measured in years and decades, he said.

FedEx’s perpetual peak pricing will continue long after the holidays end. Effective Jan. 3, most of the company’s tariff rates will rise 5.9%, higher than historical increases. Bur rate and surcharge increases will vary depending on the service. Home delivery residential surcharges will rise by 9.2%, while ground delivery surcharges on rural area deliveries will rise by 61%, according to Shipware data.

The labor situation heading into the 2021 peak is, to say the least, irregular. It is bringing issues to a head that would normally not be topics of conversation until November. There is a dearth of qualified workers and more demand than ever with retailers like Walmart and Target competing with traditional delivery carriers for the same labor pool. Companies up the hourly ante one day, only to find a rival has seen that number and raised it.

Ongoing concerns about the delta variant, and an inability to find adequate child care, just to name a couple of factors, are keeping workers on the sidelines regardless of the prevailing wage offers. Martinez said that delivery companies in years past have come close to the hiring projections made prior to peak. It is unlikely to happen this year, he said.

FedEx’s labor costs have risen year-on-year by between 16% and 25% depending on the skill set, company executives said Tuesday night after releasing fiscal 2022 first-quarter results that were subpar and that triggered a more than 10% haircut in the company’s share price the following day. FedEx executives said they are doing everything possible to mitigate the problem, and they expect cost pressures to abate during the second half of calendar 2022.

Responding to analysts’ concerns about shrinking operating margins year-over-year, President and COO Raj Subramaniam vowed that the company will produce “improved margins in all segments of our business” during the second half of the year. However, the needle is unlikely to be moved in time to avoid making the peak season a difficult period.

FedEx’s arch-rival UPS is not as capacity-constrained as FedEx, at least for now. Yet UPS is leaving no stone unturned in procuring seasonal labor; it has pledged to provide applicants with job offers within 30 minutes of receiving their applications. In years past, such a turnaround took two weeks.

Dean Maciuba, who spent decades at FedEx and is now managing director, North America for consultancy Last-Mile Experts, said the current poaching among companies for seasonal help is out of control. FedEx and Amazon.com, which like FedEx is bracing for another peak-season tsunami of packages, are openly at war for each other’s labor, Maciuba said. Even FedEx Ground contractors — the FedEx unit operates through independent service providers — are stealing drivers from each other within the same delivery terminal networks, Maciuba said.

FedEx Ground is having a far more serious driver retention problem than its rivals, according to Maciuba. This has resulted in poor service, and means the unit will likely need to recruit a “disproportionate amount” of temporary drivers to fill the void left by permanent turnover, he said.

Whether the disappointing results justified lopping off about $6 billion in FedEx market capitalization in one day is in the eye of the beholder. Several analysts, while lowering their 12-month price targets for the shares, kept their buy recommendations. In their eyes, the cost pressures are meaningful but transitory. FedEx still enjoys strong demand and pricing power, both of which have more secular legs, they said.

For shippers, the favorable options range from slim to none, despite the projections of less of a delivery squeeze than in 2020 because more vaccinated consumers will shop in store rather than online. Peak capacity is expected to be scarce, even among gig economy-type delivery firms like Roadie, which was recently acquired by UPS, and Uber Freight. Only LTL carriers are expected to have pockets of availability, and that’s because there are hundreds of carriers to choose from, said Wilkinson.

The most important thing that carriers can do for their customers is to pick up and deliver seven days a week through the entire peak cycle, said Satish Jindel, president of consultancy ShipMatrix. Round-the-clock operations will keep networks operationally lubricated and eliminate the need for more buildings or sortation facilities, Jindel said.

Only shippers that were prescient enough to already forward-position their goods as close to end customers as possible, thus avoiding the deep reliance on carrier networks, may escape relatively unscathed, according to Wilkinson. Many shippers will find their volumes capped by carriers that are expected to be more cautious this year in their capacity promises than they were in 2020, he said.

John Haber, president, parcel, for consultancy Transportation Insight LLC, warned that there isn’t a sense of preemptive urgency on the part of the parcel shipping community despite the lessons learned from last year’s peak and with an entire year to adjust. “There’s still too much hope that things will turn out all right,” he said.