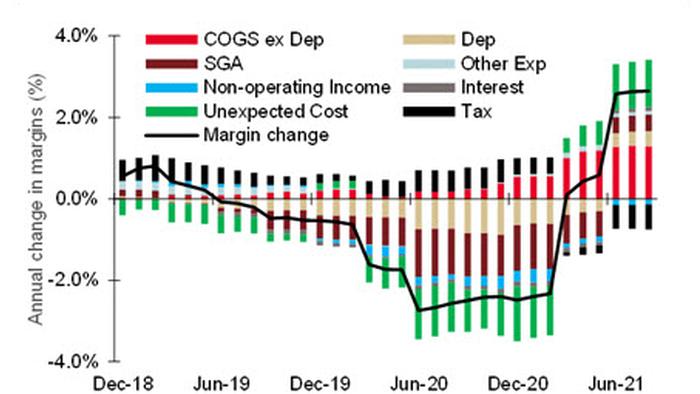 
Having spent much of the summer warning that as a result of surging labor costs, commodity prices and generally “transitory hyperinflation”, corporate margins would tumble (which in the view of Morgan Stanley would lead to a 10% correction), three weeks ago we warned that we are about to see a surge in profit warnings as the realization that the current unprecedented ascent in prices is going to be anything but transitory.

If MS and BofA are right on slumping consumer demand and margin contraction we should start seeing Q3 earnings warnings in the next 2 weeks.

Sure enough, shortly after we noted that “Profit Warnings Are Coming Fast And Furious As Q3 Profits Brace For Big Hit” it wasn’t until Nike and FedEx’s dismal outlooks that the world finally paid attention to the coming stagflationary wave.

As we reported last week, Fedex tumbled after it reported that not only did it miss Q1 earnings – just hours after announcing it was raising prices at the fastest pace in decades – but also slashed guidance, warning about sharply higher labor costs and operating expenses.Picking up on this, earlier today Nordea also chimed in saying that “FedEx adjusted down expectations and cited being 35% understaffed in various parts of the supply chain as an important reason why. This is not good!” Yes… after the fact.

We won’t waste our readers’ time on why margins are set to plunge, and drag profits along with them absent a continued surge in revenues – we have discussed that extensively in the past few months – but we will highlight a recent note from SocGen’s Andrew Lapthorne who cuts through the noise and says that corporates now have to make a decision: defend high margins or absorb “transitory” shocks.

As Lapthorne writes last week, while the rest of the world’s attention turns to China, his charts focused on corporate profitability given the concerns about rising costs, supply disruption and now higher energy costs. According to the SocGen strategist, reported EBIT growth in the US has jumped by over 30% and over 55% in Europe, a remarkable surge which has been accompanied by a sharp increase in profit margins as sales growth has easily outstripped the growth in costs. Indeed, as noted recently, US profit margins hit an all all-time high in Q2, leading to a substantial uplift in profit margins to all-time highs.

Why the focus on margins and profitability? As Lapthorne explains, “profit margins act as shock absorbers. If businesses can absorb price shocks and business disruption into their P&L instead of passing the problems onto customers then logic has it that short-term profitability would be hit, but bigger issues, such as the need for policy tightening, is reduced.”

And while on aggregate profit margins are healthy enough – for now – to absorb some temporary pain, it will be interesting to see what path the corporates take: to defend margins and risk inflation taking hold, or allow profits suffer for a while?