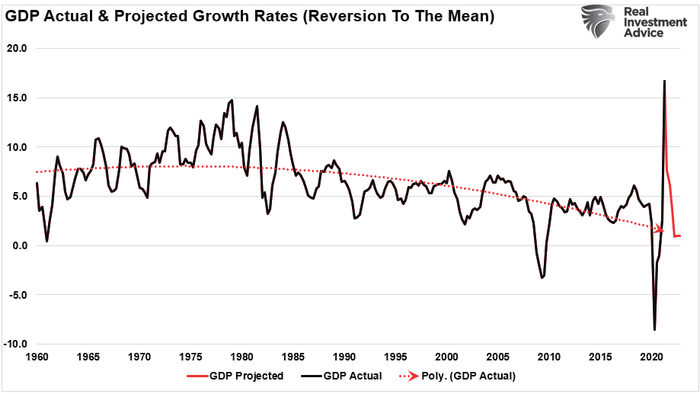 From stimulus boom to income thud, the coming “reversion to the mean” of economic growth is happening faster than economists expected.

We previously noted that while many mainstream economists believed the current economic “boom” would persist, several factors suggested it wouldn’t.

The first problem is the math. As I previously discussed in “As Good As It Gets,“ the “second-derivative” of growth is now problematic. To wit:

“There is much at risk in the market as we head into the third quarter of 2021. For clarity, we need to review the “second-derivative” effect.

In English, the ‘second derivative’ measures how the rate of change of a quantity is itself changing.

Here is a simplistic example.

Why am I telling you this? Because we are at that point in the recovery cycle. Over the next few quarters, the year-over-year comparisons will become much more challenging. Q2-2021 will likely mark the peak of the economic recovery.

In “Did The Fed’s Monetary Experiment Fail,”I discussed the importance of consumer confidence as it relates to the economy.

We must not overlook the importance of consumer confidence, given the significant contribution of personal consumption expenditures to economic growth.

At nearly 70% of the GDP calculation, it is not surprising there is an exceedingly high correlation. The vertical spike at the end of the chart is most important. That spike was from the Government injecting 20% of GDP (roughly $5 Trillion) directly into the economy during the pandemic-driven shutdown. As we will discuss momentarily, the coming reversion will be problematic.

However, before we discuss the future, it is essential to note that since 1960, the expansion of consumption (PCE), and subsequently GDP, has come from a massive increase in household debt.

Given that wages haven’t risen fast enough over the last 20-years to compensate for increased living costs, the rise in household debt is not surprising. But, as noted, the increase in debt is not for the consumption of “more stuff,” instead, debt gets used to fill the gap between wages and living standards.

Over the next several quarters, the real risk is a slowdown in consumption due to the lack of financial supports, stagnant wage growth, and high levels of underemployment.

However, it is also just a “math problem.” As noted above, the second-derivative of economic growth will have a more considerable impact in the future. Such is the problem of a larger economy due to the monetary injections. The chart below projects the annualized rate of economic growth through 2022. The polynomial trend line gets calculated using only current economic data. As you note, and not surprisingly, the two will intersect during the mean reversion.

While the “speed” of the reversion can get debated, the eventuality is just a function of math. As the economy grows, the annual growth rate will decline. The intersection of the economy to the polynomial trend will occur, aligning with the Fed’s own long-term economic growth projections.

As you will note, economic growth rates peaked in 1980 and continued a steady trend lower. Again, such is a function of stagnant wage growth and rising debt levels. Importantly, given the importance of PCE on growth, the rate of consumption continues to set lower trend growth levels after each major recession. As shown, PCE slowed after the “Dot.com” crash, the “Financial Crisis,” and likely will set a new lower trend level next year.

After the “Financial Crisis,” the media buzzword became the “New Normal” for what the post-crisis economy would like. It was a period of slower economic growth, weaker wages, and a decade of monetary interventions to keep the economy from slipping back into a recession.

Post the “Covid Crisis,” we will begin to discuss the “New New Normal” of continued stagnant wage growth, a weaker economy, and an ever-widening wealth gap. Social unrest is a direct byproduct of this “New New Normal,” as injustices between the rich and poor become ever more evident.

If we are correct in assuming that PCE will revert to the mean as stimulus fades from the economy, then the “New New Normal” of economic growth will be a new lower trend that fails to create widespread prosperity.

Of course, none of this is a surprise.

It has been in process for the last 30-years. Yet, mainstream economists still fail to recognize the consequences of rising debt levels and the failure of socialistic policies.

Well, in 2020, the country expanded its debt massively. The Fed and Government flooded the economy with liquidity to prevent the recession from doing its much-needed job of cleansing excesses from the system.

If more debt doesn’t create growth this time, we have only ourselves and the economists to blame.