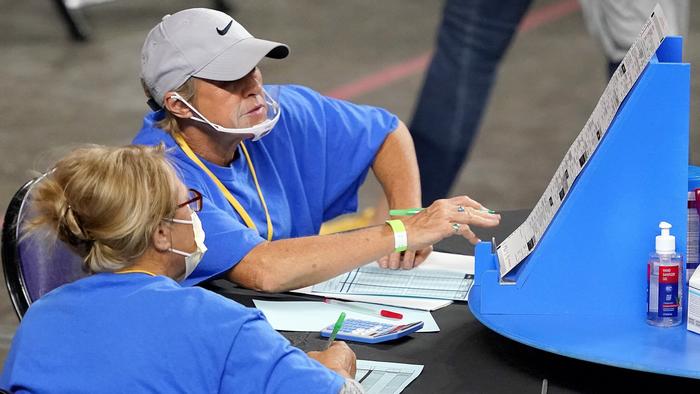 
An election audit ordered by the GOP-controlled Arizona state Senate did not find widespread election fraud in Maricopa County, and actually showed former President Trump losing the largest Arizona county by a slightly wider margin than the certified count, according to the Arizona Republic, which received a draft of the final report.

The three-volume report by the Cyber Ninjas, the Senate’s lead contractor, includes results that show Trump lost by a wider margin than the county’s official election results. The data in the report also confirms that U.S. Sen. Mark Kelly won in the county.

The official results are set to be presented to the Senate at 1 p.m. Friday. Several versions of the draft report, titled “Maricopa County Forensic Audit” by Cyber Ninjas, circulated prematurely on Wednesday and Thursday. Multiple versions were obtained by The Arizona Republic. -Arizona Republic

The Cyber Ninjas – who were mocked by Democrats for months while they were performing a hand-recount, were paid millions to compile the report. According to the draft, the report does raise questions about the election process and voter integrity. The draft also shows that there was less than a 1,000-vote difference between the county’s official count and the Cyber Ninja’s hand count.

Per the draft report:

What has been found is both encouraging and alarming. On the positive side there were no substantial differences
between the hand count of the ballots provided and the official canvass results for the County. This is an important
finding because of concerns ahead of the audit.

However, while it is encouraging for voters, it does not allay all of the concerns:

Had Maricopa County chosen to cooperate with the audit, the majority of these obstacles would have easily been
overcome. By the County withholding subpoena items, their unwillingness to answer questions as is normal between
auditor and auditee, and in some cases actively interfering with audit research, the County prevented a complete audit.

The draft report was issued in three parts adding up to approximately 110 pages, and recommends several areas of concern to be investigated by the Arizona attorney general.

We’re sure we haven’t heard the last of the AZ audit saga.