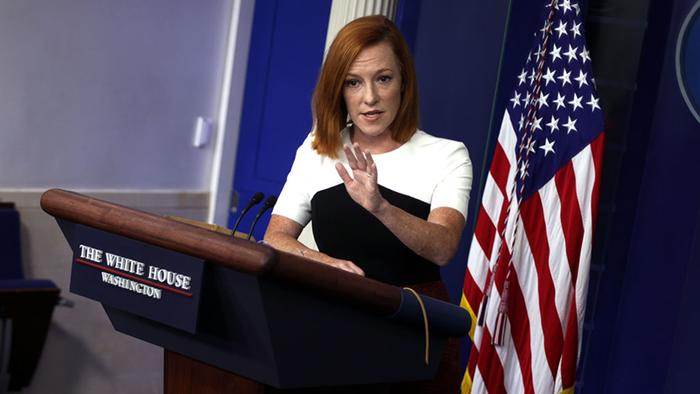 Following yesterday’s demand from the White House press pool for an explanation about why Joe Biden will not answer any questions, Press Secretary Jen Psaki attempted to blame UK Prime Minister Boris Johnson for not alerting Biden’s team that he intended to take questions during an Oval office meeting.

O’Keefe noted that “the British Prime Minister in the American Oval Office called on British reporter, and then when American reporters tried to call on the American president, we were escorted out.”

Psaki responded “I think our relationship with the United Kingdom and with prime minister Johnson is so strong and abiding, we’ll be able to move beyond this,” adding “But he called on individuals in his press corps without alerting us to that intention in advance.”

Oh the horror, a sitting leader of a country daring to answer some reporters’ questions off the cuff, without a bunch of handlers herding them away.

PSAKI: “He called on individuals from his press corps without alerting us to that intention in advance.” pic.twitter.com/vHEzoutOKE

Psaki said “The president knows that he was elected not just to get the pandemic under control and put people back to work, but protect our democracy and stand up for what’s right and be transparent,” adding “Certainly part of that is engaging with all of you. I would note that he answered questions 135 times leading up to September, three times last week.”

As we have pointed out, Biden’s handlers are intent on tightly controlling his interaction with anyone outside the White House bubble, even muting his mic and aggressively yelling at reporters to get away from him.

Joe Biden says that he “was instructed to call on” specific reporters for questions.

Who is calling the shots here? pic.twitter.com/K24AH81g1L

BIDEN: “I’ll take your questions and as usual, folks, they gave me a list of the people I’m going to call on” pic.twitter.com/RdAks1RIdp

BIDEN: “Can I ask you a question?”

REPORTER: “If Americans are still in Afghanistan after the deadline what will you do?”

A week ago, Republican Senator James Risch demanded to know who is in charge of controlling when the President is allowed to be heard, noting during a Senate hearing that “This is a puppeteer act, if you would, and we need to know who’s in charge and who is making the decisions.”

“Somebody in the White House has authority to press the button and stop the president, cut off the president’s speaking ability and sound. Who is that person?” Risch asked.

Tweeting out the video, leftists insisted the claims were ‘bizarre,’ ‘ridiculous’ and ‘absurd’:

When you are living in the Murdock news bubble….a NY Post story prompted by a RNC tweet and then echoed across the right-wing tv & twitterverse. https://t.co/eDT4t5joKr https://t.co/kOgUzoPfMe

A button to control his audio? Absurd to suggest the people who give him the list of reporters he’s allowed to answer, with the instructions for what he’s supposed to do next, which he inevitably reads out loud, would have or need such a thing. https://t.co/gWSkAuYpeD

Why Morgan Stanley Is Finding Shelter In IG Credit

Instagram starts testing a home feed without a shopping tab