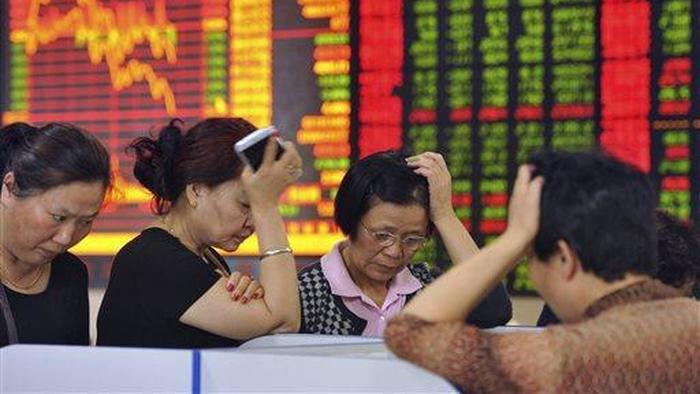 
It has been a rollercoaster session for Evergrande this morning.

It started off optimistically enough, with Evergrande stock – which hit an all time low earlier this week in Hong Kong trading – soaring as much as 30% on furious short covering in early trading following news that the company would make an interest payment on local bonds…

… even though the big question for today was whether foreign creditors, who are also owed an $83.5 million interest payment Thursday, would get their money.

Evergrande pared its gains before the close as selling shareholders took advantage of the price spike to continuing unloading shares, although the mood was decidedly more hopeful than on previous day, and pushed US equity futures sharply higher this morning.

… in which Bloomberg reported that according to “a person familiar with the matter”, financial regulators in Beijing “issued a broad set of instructions to China Evergrande Group, telling the embattled developer to focus on completing unfinished properties and repaying individual investors while avoiding a near-term default on dollar bonds.” The report added that “in a recent meeting with Evergrande representatives, regulators said the company should communicate proactively with bondholders to avoid a default but didn’t give more specific guidance.”

And while even Bloomberg conceded that the regulatory guidance “offers few clues about what an Evergrande endgame might look like, it does suggest China’s government wants to avoid an imminent collapse of the developer that might roil financial markets and drag down economic growth.“

In other words, even more good news, with Beijing explicitly demanding that Evergrande should make foreign creditors whole and the implication being that an Evergrande collapse may be avoided.

Or so the market though, until exactly one hour later when in a separate flashing red headline…

.. Bloomberg informed the world of a story published away in the WSJ, which delivered just the opposite news, namely that “China Makes Preparations for Evergrande’s Demise” and that “authorities are asking local governments to prepare for the potential downfall of China Evergrande Group.” The report, which also cited anonymous “officials familiar with the discussions” who may or may not have major financial exposure to Evergrande – which we assume are different anonymous sources from the ones Bloomberg used – signaled “a reluctance to bail out the debt-saddled property developer while bracing for any economic and social fallout from the company’s travails.”

The WSJ then notes that “officials characterized the actions being ordered as “getting ready for the possible storm,” but it also gives the suggestion that a nationalization of Evergrande is on the table, quoting those same officials as “saying that local-level government agencies and state-owned enterprises have been instructed to step in only at the last minute should Evergrande fail to manage its affairs in an orderly fashion.“

They said that local governments have been tasked with preventing unrest and mitigating the ripple effect on home buyers and the broader economy, for example by limiting job losses—scenarios that have grown in likelihood as Evergrande’s situation has worsened.

The report also notes that local governments have been ordered to “assemble groups of accountants and legal experts to examine the finances around Evergrande’s operations in their respective regions, talk to local state-owned and private property developers to prepare to take over local real-estate projects and set up law-enforcement teams to monitor public anger and so-called “mass incidents,” a euphemism for protests, according to the people.”

In other words, just as we explained in “How Evergrande Became Too Big To Fail And Why Beijing Will Have To Bail It Out“, Beijing will be dragged in -kicking and screaming – with a bailout of Evergrande one way or another, in order to prevent Beijing’s biggest nightmare – mass social unrest.

That said, a nationalization scenario does not answer today’s $640 billion question: will Evergrande’s offshore bondholders be made whole, or will the upcoming nationalization  be part of a broader balance sheet restructuring.

What we do know is that as of 645am ET this morning, Bloomberg also reported that two holders of a China Evergrande Group dollar bond with a coupon due later Thursday “said they hadn’t received payment as of 5pm Hong Kong time” with Bloomberg adding that “there was no immediate reply from Evergrande to questions about the interest payment.”

In short, total chaos continues, market reaction notwithstanding, and we expect it will get far more confusing from here as Chinese “sources” use reputable US mainstream media sources to not only convey what is going on but to allow themselves (and their conflicts of interest) an exit mechanism. After all, it’s not as if anyone will prosecute them for insider trading.