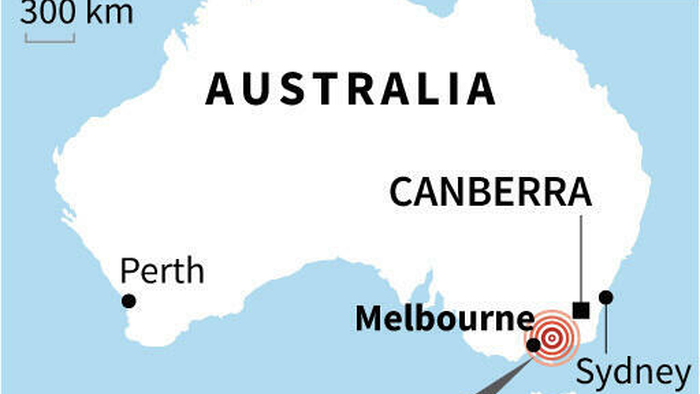 
One of the most powerful onshore earthquakes that rocked the state of Victoria, Australia, couldn’t have come at the worst time as anti-lockdown protesters are fed up with the government’s COVID restrictions and vaccine requirements.

According to Geoscience Australia, a magnitude 5.9 earthquake struck around 0915 local time about 75 miles northeast of Melbourne, causing damage to buildings.

Photos and videos flooded social media of the aftermath. It appears some buildings in Melbourne were damaged. So far, local officials are reporting no casualties.

This collapse says more about the building stock in Melbourne than the size of the earthquake. Lucky the earthquake occurred during lockdown – another win for @DanielAndrewsMP perhaps? pic.twitter.com/azhn8bWW8s

A magnitude 5.8 earthquake — Australia’s biggest in 5 years — has caused damage in Melbourne.

The quake was at a depth of 10 km (6 miles) https://t.co/cG3lcATWKB pic.twitter.com/kSL9IHURE3

Building damage in melbourne after the earthquake pic.twitter.com/jKglIxIB6I

Australian Prime Minister Scott Morrison updated the press on the ongoing situation and said quakes are “very rare events in Australia.” Several tremors were felt after the initial quake.

CORRECTION: A magnitude 6.0 earthquake struck near Melbourne, causing damage to buildings in the country’s second-largest city and sending tremors throughout neighboring states https://t.co/mrMSYLSSzB We are deleting a previous video to correct a courtesy pic.twitter.com/MRiJe1QsVG

The timing of the quake comes as people in Melbourne are under COVID lockdowns. On Tuesday, more than 20,000 anti-lockdown protesters clashed with police and shut down city streets.

Dee Ninis at the Seismology Research Centre in Melbourne said the metro area should be thankful the epicenter of the quake occurred outside town, which was not in a populated place.