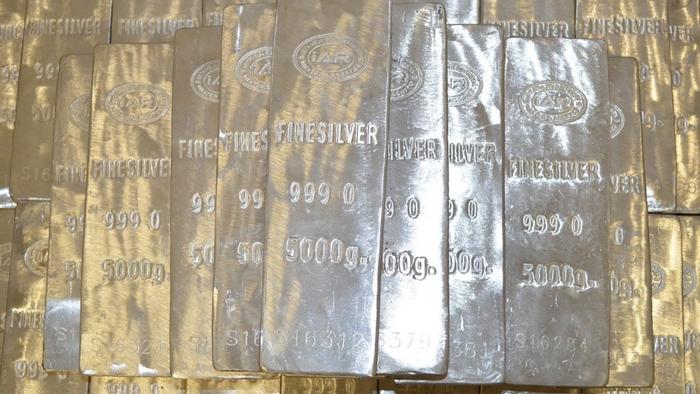 The gold-silver ratio has ballooned again, indicating that silver is once again a bargain buy.

During a gold bull market, silver typically outperforms gold. We saw this during the big runup in the price of both metals through the early months of the pandemic. In the third quarter of last year, silver charted its best quarter since 2010, finishing up 27.62% through the three months ending Sept. 30. Going back further, silver spiked 106.6% off its March 2020 low.

Prior to the pandemic, the gold-to-silver ratio was well above 80-1. In February 2020, it stood at 88-1. The ratio climbed to nearly 93:1 in the summer of 2019. As silver and gold rallied last year, the big increase in the price of silver pushed the gold-silver ratio back below 70-1.

In recent months, silver and gold have both faced significant pressure as markets anticipate the Federal Reserve will begin to tighten monetary policy. Silver has faced stronger selling pressure than gold, and the silver-gold ratio has reopened, running at 78-1 today.

In practice, this means it takes 78 ounces of silver to buy one ounce of gold. To put that into perspective, the average in the modern era has been between 40:1 and 50:1.

So, what does the gold-silver ratio tell us?

In simple terms, it signals that from a historical perspective, silver is underpriced compared to gold.

In 1792, the gold/silver price ratio was fixed by law in the United States at 15:1. France mandated a ratio of 15.5:1 in 1803. Faced with the challenges of a bi-metallic monetary system with fixed exchange rates and the aftermath of a worldwide financial crisis, the US Congress passed the Coinage Act of 1873. Following the lead of other Western nations, including England, Portugal, Canada, and Germany, this act formally demonetized silver and established a gold standard for the United States.

With silver playing a smaller role as a monetary metal, the silver-gold ratio gradually spread. The modern average over the last century has been in the 40-1 to 50-1 range.

Commodities analyst Jason Hamlin said in an article published by Seeking Alpha, “The gold-silver ratio has been one of the most reliable technical ‘buy’ indicators for silver, whenever the ratio climbs above 80.”

We’re right at that doorstep.

Silver is much more volatile than gold due to its industrial role, but at its core, it is still a monetary metal and it tends to track relatively consistently with gold over time. When gold goes up, it almost always takes silver with it, and as already noted, silver typically outperforms gold in these bull runs.

The expectation is the Fed will begin tapering its quantitative easing program in the near future and this has created significant headwinds for gold and silver. But as Peter Schiff has noted, a slight slowdown in asset purchases does not equal a “tight” monetary policy. Furthermore, Peter thinks any tapering will be short-lived and the Fed will ultimately expand QE.

It knows the only foundation this bubble economy has is the Fed’s easy money policies. And I don’t think they have any actual plans to taper. And even if they just kind of feign the process by beginning it, they’ll never complete it because soon after they start the taper, again, if they even ever start, they’re going to have to reverse the process. Because ultimately, the Fed Fed is going to expand the QE program and start to buy a lot more government Treasuries and mortgage-backed securities in the future than it’s doing right now.”

This is bullish for both silver and gold.

Silver has hit an all-time high of $49 per ounce twice – in January 1980 and then again in April 2011. If you adjust that $49 high for inflation, you’re looking at a price of around $150 per ounce. In other words, silver has a long way to run up. As one analyst put it, “With the long-term downside potential of silver very low versus its current valuation, the risk/reward is one of the best investments on the planet.”