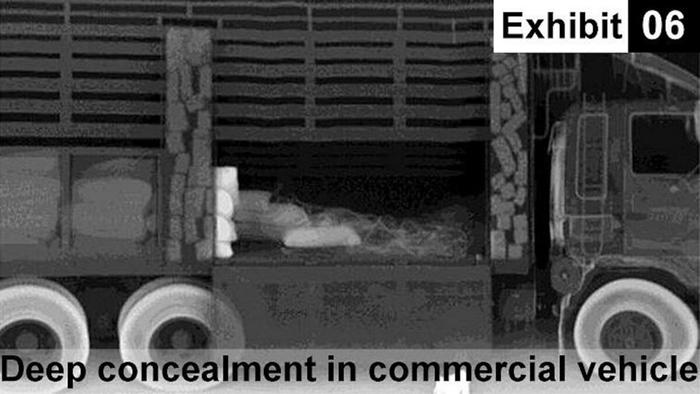 
By Nate Tabak of FreightWaves,

On Dec. 1, a truck driver pulling a flatbed trailer presented himself to U.S. border officers at the Peace Bridge in Buffalo, New York, one of the busiest commercial crossings with Canada. He had picked up his load of aluminum panels in Toronto and was delivering it some 450 miles away in Somerset, New Jersey.

At face value, it might have appeared as a typical cross-border run. But something aroused the suspicions of U.S. Customs and Border Protection officers after the driver presented his manifest. The address of the shipper was linked to a marijuana seizure made at the Peace Bridge nearly six months earlier.

So the officers scanned the flatbed with an X-ray machine used for cargo inspections. After spotting an anomaly, they inspected the cargo itself by hand. They removed the top aluminum panel and found the source of the anomaly: The remaining panels had been hollowed out and filled with vacuum-sealed packages of marijuana, totaling nearly 1,000 pounds, along with a suspected GPS tracker.

By the next day, the driver was back on the road to New Jersey, still with the shipment of aluminum panels containing the marijuana. A team of agents from the Homeland Security Investigations Buffalo office tailed him. The driver was aware of the detail, having agreed to continue the delivery under their supervision, HSI agent Timothy Carroll wrote in an affidavit filed in the U.S. District Court for the Western District of New York two days later.

“HSI Buffalo personnel followed the tractor and trailer to its manifested destination of New Jersey, maintaining constant surveillance of the cargo,”  Carroll wrote. The surveillance included an overnight rest break in Pembroke, New York, after the driver ran out of hours.

The driver’s experience appeared in court documents filed in the case of two men charged with conspiring to smuggle the marijuana across the Canadian border and distribute it in the United States. In July, Ranjodh Singh, 22, pleaded guilty to a single charge in the case, while charges are pending against co-defendant Amanpreet Gill.

The case provides a window into the murky world of marijuana smuggling from Canada to the U.S. While the illicit trade has been active for years, seizures from commercial vehicles have soared after the border closed to nonessential travel in March 2020. That December marijuana seizure was one of 131 reported by CBP that month. Seizures in the Buffalo area accounted for more than half of that pot by weight.

The truck driver, who was not named, does not appear to have been charged. Court documents do not make any suggestion that he knew about the marijuana in the load or made any agreements with U.S. authorities in exchange for cooperation. Drivers caught with loads of drugs at the border aren’t necessarily charged, typically either due to lack of evidence or investigators or prosecutors concluding they weren’t involved.

Alvin Phillips, a spokesperson for HSI’s Buffalo field office, declined to comment on the case. A spokesperson for the U.S. Attorney’s Office for the Western District of New York did not respond to FreightWaves’ request for comment.

Su Ross, a Los Angeles attorney who frequently represents carriers caught up in drug smuggling cases, said it’s unusual that a truck driver would be asked to continue with a contraband load. More commonly, authorities could be tracking the load without the driver’s knowledge, or a federal agent with a commercial driver’s license would take over to avoid “the appearance of impropriety,” said Ross, a partner with the law firm MSK.

“It’s surprising,” Ross said. “Maybe they [HSI] didn’t have someone available with a commercial license.”

Ross also questioned the wisdom of having the driver’s role disclosed in publicly available court documents. Even though the trucker wasn’t named, Ross said it would have been easy for any criminal organizations involved to figure out their identity.

Trucker being watched by the feds – and the criminals too

Court documents don’t detail the conversations the driver had with HSI agents, who are typically notified after CBP officers find contraband. But the driver’s cooperation appears to have extended beyond simply driving the load.

After his rest break in New York, the driver and the HSI agents continued toward New Jersey on Dec. 2. At some point, the driver received a call from someone named Alex, who informed him that the destination address had changed, according to court documents. The driver then received a text message with a new address and a phone number, along with these instructions: “Ask for Jim.”

By the time the driver arrived at the new delivery location just after 4 p.m., law enforcement already had the warehouse under surveillance. They observed someone who had arrived at the location earlier take photos of the truck and cargo, court documents state.

It took about one hour and 10 minutes for the aluminum panels and marijuana to be unloaded. The trucker drove away — followed by the man who had been taking photos of him. Singh later admitted to being that man in his plea agreement, which includes a mandatory minimum sentence of five years in prison. His iPhone contained 16 photos of the tractor-trailer.

Law enforcement continued monitoring the New Jersey warehouse after the trucker left. The next day, on Dec. 3, another truck picked up the aluminum panels and delivered them to a second warehouse. Authorities subsequently entered the warehouse, arresting the driver and Singh’s co-defendant, Gill, according to court documents. Singh was arrested later after arriving at the facility.

The second truck driver maintained not knowing about the marijuana and does not appear to have been charged. Gill also denied being involved in the marijuana distribution conspiracy.

Singh’s lawyers declined to comment on the case. Gill’s lawyer did not respond to a request for comment.

As for the original truck driver, it’s unclear what happened to him. Efforts to locate him or his carrier were unsuccessful.