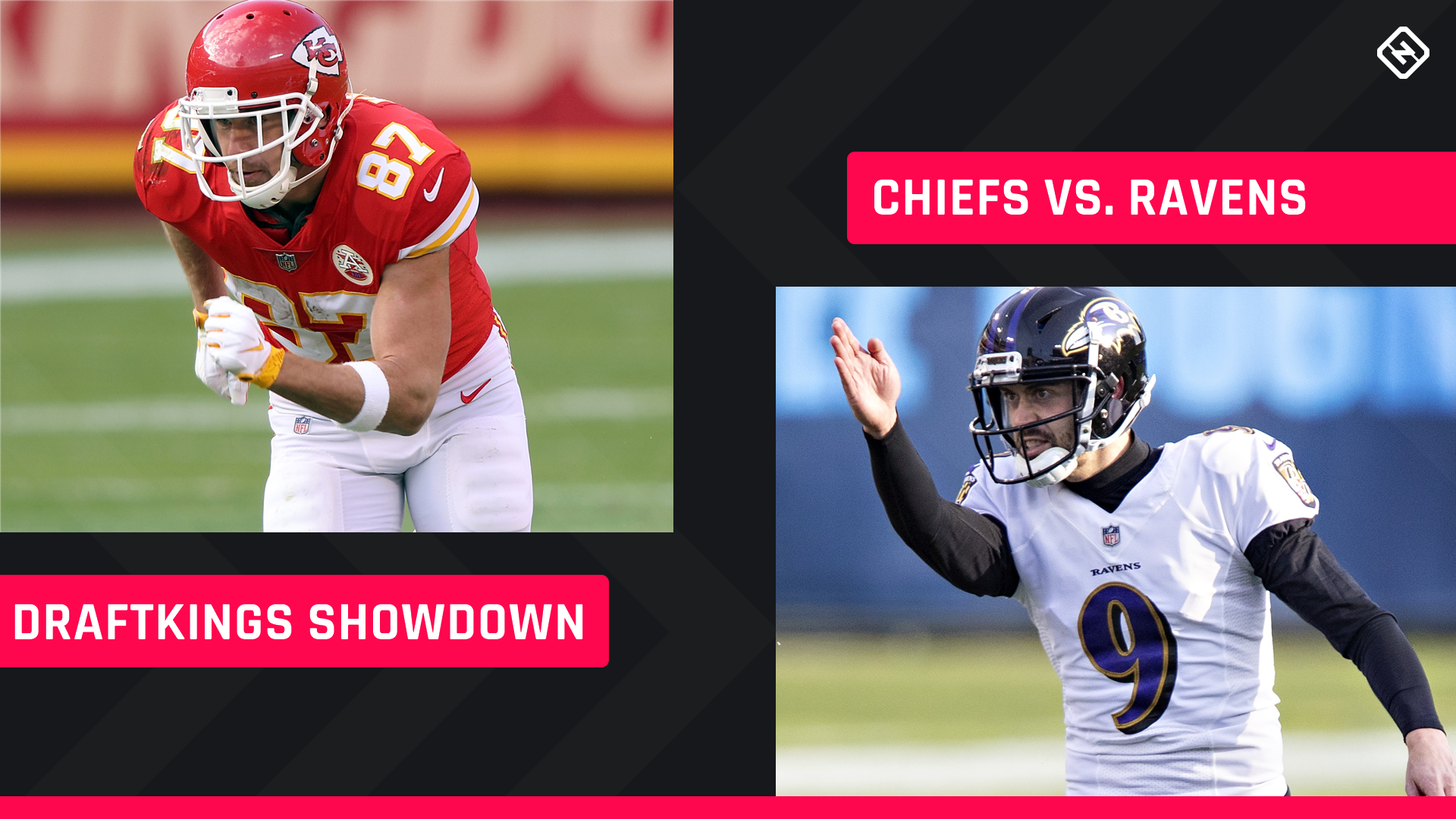 The schedule-makers earn a tip of the cap for providing football — and NFL DFS — fans with such a marquee Sunday Night Football matchup. The Ravens host the Chiefs in a showdown of Super Bowl hopefuls. The Ravens have been hit hard by the injury bug and opened as 2.5-point underdogs. Vegas also set the total at 55.5, so it’s fair to anticipate a hotly contested, high-scoring affair that make it extra fun to narrow down your lineup picks for DraftKings Showdown contests.

This week’s build can be categorized as “stars and special teams”. That’s the compromise for being greedy at the top, but we’re also cognizant of the significant impact — real and fantasy — special teams can play in these types of matchups.

As a reminder, here are the most notable scoring quirks of DraftKings Showdowns: It’s full-point PPR, and there are three-point bonuses for 300 passing yards, 100 rushing yards, and 100 receiving yards. The Captain pick costs 1.5 times a player’s original price, but he also gets his point total multiplied by 1.5.

Hill and Travis Kelce ($15,600) will both enjoy “top dog” weeks this season, so it’s worth doing one lineup with Hill as captain and another with Kelce. Both are imminent threats to deliver 10-plus catches, 100-plus yards, and/or multiple TDs.

Mahomes has improved in each of his three meetings with the Ravens, posting 24.8 DraftKings points in 2018, 30.9 in 2019, and 43 in last season’s tilt. The Ravens are going to sink their teeth in defensively no matter what, but their diminished unit is going to have its hands completely full with Mahomes and his boys.

If you anoint Hill as your captain, this is Kelce’s spot and vice/versa. Kelce hasn’t missed a beat following last year’s prodigious season and will continue to serve as a must-have fantasy asset. He’s posted a combined 20-253-1 line on 24 targets over his past three contests against Baltimore.

Butker has scored double-digit fantasy points in 16 of his past 33 contests. We’re not pinning our hopes on him approaching his ceiling — he’s gone over 15 fantasy points nine times in his career — but we like the odds of him delivering a respectable number on a night that could see a lot of scoring.

Similar to his counterpart, Tucker has eclipsed the 10-fantasy-point plateau 13 times since 2019 and reached at least 15 fantasy points five times over that span. If Tucker isn’t the best kicker in the game, he’s damn close. With the amount of offense that’s anticipated, Tucker should be able to get considerable screen time on Sunday night.

Even in a game with such a high total, it’s worth considering all the paths through which Kansas City can put fantasy points on the board. For as good as Lamar Jackson and Co. have been, this 2021 version has flaws. Their running back room has been decimated, they’re hobbled in the pass-catching ranks, and if Jackson is forced to drop back frequently, his offensive line could struggle to sufficiently protect him — the Raiders sacked  Jackson three times in Week 1. Not to mention, Mecole Hardman and Byron Pringle have combined for three career touchdowns in the return game.

Alternate consideration: Not feeling the special teams slant? You’ll have to sacrifice Mahomes and opt for Lamar Jackson ($11,800) instead. This also requires a commitment to Kelce as your captain. The modest savings will be enough to allow you to roll the dice with Mecole Hardman ($4,600) instead of the Chiefs’ D/ST.