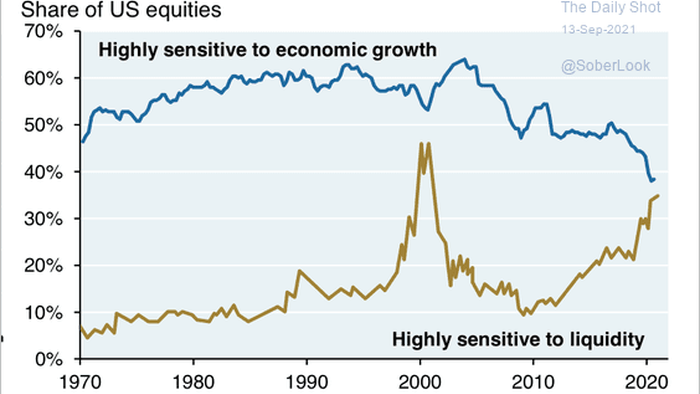 
Authored by Michael Lebowitz via RealInvestmentAdvice.com,

In other words, let your actions, not your words set the tone.

It appears the Fed may be taking the opposite tack. Many Fed members are vocal about tapering soon, but there is reason to believe the Fed will not back their words with action.

Might the Fed be speaking loudly and carrying a feather?

Expectations for the Fed to turn “hawkish” and announce a tapering schedule at the next meeting or two are high. A recent Wall Street Journal article hints at an announcement at the September 2021 meeting and tapering in November. The solid economic recovery, coupled with gains in employment and a higher than the target inflation rate, supports such an action.

We think the Wall Street Journal timetable is correct. However, an analysis of the composition of the Fed by voting status and their degree of influence leads us to keep an open mind.

The quotes below from various Fed members speak to a sense of urgency to begin tapering QE.

The most recent Fed’s Beige Book,describing economic conditions in each of the 12 Federal Reserve Districts, explains why many members are concerned with inflation and eager to taper.

The document starts with a one-paragraph highlight from each district. As shown below, all the summaries include a statement on labor shortages and or wage pressures. The topic is top of mind at the Fed, as it should be. If there are widespread job shortages and intense hiring pressures, as seen in the record number of job openings, wages may continue to rise and foster more inflation.

Boston: “inability to get supplies and to hire workers.”

Richmond: “many firms faced shortages and higher costs for both labor and non-labor inputs.”

Recent market gyrations highlight investors are paying close attention to the quotes above and many others like it.

The cries for taper are easy to justify. Justification is one thing, but monetary policy decisions are based on the decisions of the Federal Open Market Committee (FOMC).

The FOMC currently has 18 members, but only 11 are eligible to vote on monetary policy. The other members can only influence the committee.

The chart below, from InTouch Capital Markets, provides the names and positions of the 18 members.  Importantly it shows their voting eligibility and sorts them by their policy stance.

There are six members Intouch deems dovish or more willing to continue an excessive monetary policy. They seek more affirmation of economic recovery before changing policy.

There are two members deemed neutral, leaving the FOMC with ten hawkish members. Many of the hawks are outspoken about the need to taper QE sooner rather than later. At first glance, it appears the hawks can steer policy.

The hawk/dove breakdown favors the hawks and their calls to taper. Nevertheless, we must also consider voting eligibility and influence.

When only contemplating the 11 voting members, the doves have the majority. Five of the six doves can vote this year, while only four of the ten hawks can vote in 2021.  The two other voters are neutral.

More important than the number of hawkish or dovish votes is the level of influence each member has on policy decisions. Chairman Powell, a dove, is the lead decision-maker at the Fed. While he may aim for a strong consensus, he ultimately makes the decisions.

Next in line behind Powell is the neutral Vice Chair, Richard Clarida. Behind him, the New York Fed President John Williams is dovish and wields clout. The New York Fed manages the trading operations supporting Fed policy and influences the largest banks and brokers. Lastly is another dove in board member Lael Brainard. She is a candidate to replace Powell when his term ends next year. Beyond the Chair, Vice-Chair, and President of the New York Fed, Brainard probably has the most influence on the committee.

Of the four most influential voters, one is neutral, and three are dovish.

Dissension in the Ranks

The analysis thus far argues the loud tone from the hawkish Fed members is secondary to Chair Powell and the other Fed influencers. The markets acknowledged this with a strong rally following Chair Powell’s dovish address at the Jackson Hole Symposium. While some thought he might take a step toward announcing a taper time frame, he was non-committal, preferring to wait for more economic data.

The Fed meets on September 22nd.  They may acknowledge some concern about inflation. They will also discuss the continuing recovery of the labor market. Despite grossly exceeding their inflation goal and making significant progress toward their employment goal, they may hold off announcing a tapering schedule.

If this proves to be the case, the number of dissenting voters is meaningful. Voters would dissent because they want to taper immediately. Many hawks are satisfied that the job market is on the road to recovery and are concerned about inflationary pressures.

Will they dissent? One or two dissents, while not frequent, are not uncommon either. The market reaction might be muted to a bit of friction. Where we offer caution is if the number of dissenting voters totals four or five or even more.

It’s apparent by market behaviors investors care much more about the amount of Fed liquidity than economic data, valuations, and fundamentals. The graph below from Bridgewater shows Fed liquidity trumps fundamentals at a level not seen in at least the last 50 years.

As we wrote in AMC Foolishness Comes At A Dear Cost:

“Bad economic news is good news for share prices because it ensures the Fed will provide stimulus for longer.”

Most investors agree delaying tapering is good for the market. Conversely, removing liquidity via tapering, given such high valuations, portends risks. While Powell and his dovish clan may put off tapering, investors will not take multiple dissensions lightly.

Powell, in the last few months of his term, must thread the needle. He likely wants to avoid a market meltdown so he can be reappointed. At the same time, he needs to show he has complete control of the Fed.

If he can corral the hawks and get them to agree on a later time frame for taper, he might accomplish his personal goal of another term while keeping markets afloat a while longer. If investors believe he is losing control of the Fed, he not only faces market volatility but the potential to lose his job.

The UK View On Medical Cannabis