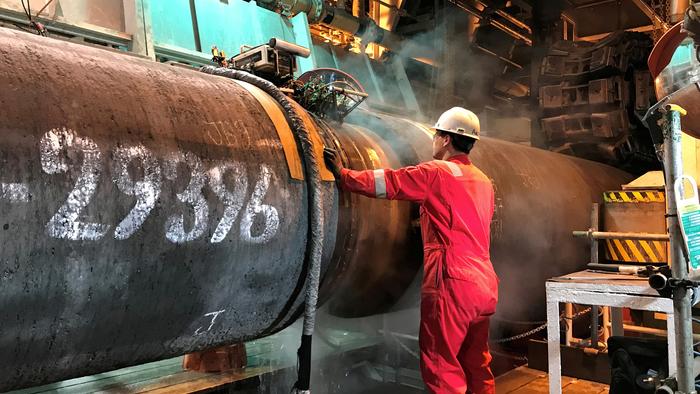 
European gas prices continue their unprecedented surge Wednesday as a supply crunch continues to worsen ahead of winter.

“The market is super tight, so not much needed to move the needle and blow up the market,” Oystein Kalleklev, chief executive officer of shipowner Flex LNG told Bloomberg.

Kalleklev said the latest rally in prices had been driven by concerns Germany permitting Russia’s Nord Stream 2 could take months. He added LNG cargo disruption from the US Gulf Coast due to the latest tropical activity is another issue.

German power prices increased by as much as 8.3% to 108 euros per megawatt-hour but has since faded the highs.

The timing of Russia’s Nord Stream 2 pipeline will be critical for European gas markets. US sanctions have caused multiple delays. However, Russia’s state-controlled energy giant Gazprom announced that it had completed construction on the Nord Stream 2 Russia-to-Germany stretch last Friday.

Gazprom said gas deliveries for Europe are ready though it could take four months under EU regulators to approve the new pipeline for use. And that may be too long as the winter season approaches and supply crunches could send gas and power prices even higher.

Former Austrian Minister of Foreign Affairs, Karin Kneissl, told RT News that prices surges in gas and power markets could persuade regulators to approve the Nord Stream 2 much quicker than previously thought, primarily due to mounting political pressure of the working poor who have seen their power bills skyrocket in the last month.

“The [gas] supply contracts are there. And we will see to what extent the German regulator will speed up the certification process for Nord Stream 2, which, construction-wise, is done. Some people say that it could take months. But maybe the current situation will speed things up,” Kneissl said

As the chart below shows, the amount of gas entering Germany at the Mallnow compressor station has plunged by almost half, signaling Russia is flowing less through the Yamal-Europe line in what may be a Kremlin shot across the European bow, and a reminder who literally keeps the lights open during the winter.

“Despite Russian flows via the Polish-German border at Mallnow showing improvement, overall Russian flows and the ability to increase those further remain uncertain,” Energi Danmark wrote in a note. “Demand is still very high in both Asia and in Europe as low storage levels remain. Without further clarity on Russia’s supply situation, the market is in for more upside today.”

Traders have been focused on sinking supplies to start the month. Now is the time when inventories are refilled, but that is not happening.

Political pressure is mounting across Europe as hyperinflating energy prices have infuriated the working poor. And if these elected officials want to get re-elected, they might have to turn their backs against the US and side with Russia.