After last week’s market focus on monetary policymakers, uncertain investors are likely to place additional emphasis on upcoming economic data this week, as they attempt to get out ahead of the pack at deciphering the tapering path for global central banks.

Market participants are finding there’s a complex verbal labyrinth being laid out by central bankers regarding the timing for shrinking levels of government stimulus, when the presumed objective should be clarity rather than policy surprises in order to avoid shocks to the financial system. All this opacity by policymakers is occurring even as levels of uncertainty about the health of the fragile post-pandemic recovery escalate.

During his Jackson Hole at the end of August, Fed Chair Jerome Powell predicated tapering the Fed’s massive stimulus upon an improving jobs market, among other considerations. A week later, with all eyes on the extremely disappointing August release—which came in nearly two-thirds lower than expectations, the worst print since January—investors assumed tightening would be delayed.

However, a growing number of Fed officials, including Fed Governor Michelle Bowman, , weak recent numbers notwithstanding, “we are still looking at very robust economic growth.” Bowman then added:

“We are very close to our goal on maximum employment…If the data comes in as I expect that it will, it will likely be appropriate for us to begin the process of scaling back our asset purchases this year.”

That came just a day after European Central Bank President Christine Lagarde “the lady isn’t tapering,” referring to the ECB. Lagarde argued that slowing down the central bank’s bond purchases is ‘recalibration’ rather than tapering. Clearly, Lagarde has learned to mince her words, having picked up a few moves from Federal Reserve chief Powell.

Amid the confusion, investors must also contend with ongoing signs the economy appears to be sputtering. In its latest survey of business conditions, the Fed noted that economic activity has “downshifted” due to COVID.

At the same time, US equities posted their sharpest weekly selloff since mid-June. All four major benchmarks—the , , and —dropped about equally on Friday, though the reflation trade, via the small-cap Russell, had a slight advantage. That index declined the least, -0.7%; conversely, the tech-heavy NASDAQ dropped the most, down 0.9%.

Adding weight to the reflation trade’s ‘dominance,’ on Friday, it was the value sectors on the S&P that outperformed shares. and were barely in the red, 0.02% and 0.04%, respectively, while tech dropped a full percent into negative territory.

However, there was a defensive sector that did even more poorly than the growth sector—. It was down 1.4%.

It’s possible real estate stocks are being sold off in anticipation of tapering. After all, some believe it was the most accommodative monetary policy in history that sent home prices soaring in the first place.

On Friday, the S&P 500 completed an Evening Star, something that’s rare on weekly charts:

This one is also powerful, wiping out all the gains made in the preceding two sessions.

Shares of Apple (NASDAQ:) plunged 3.3% on Friday. The iPhone maker underperformed the S&P 500 Index after the tech giant was censured for its App Store practices when a judge ordered the company to allow developers to use outside payment methods, effectively siphoning away customers from AAPL. 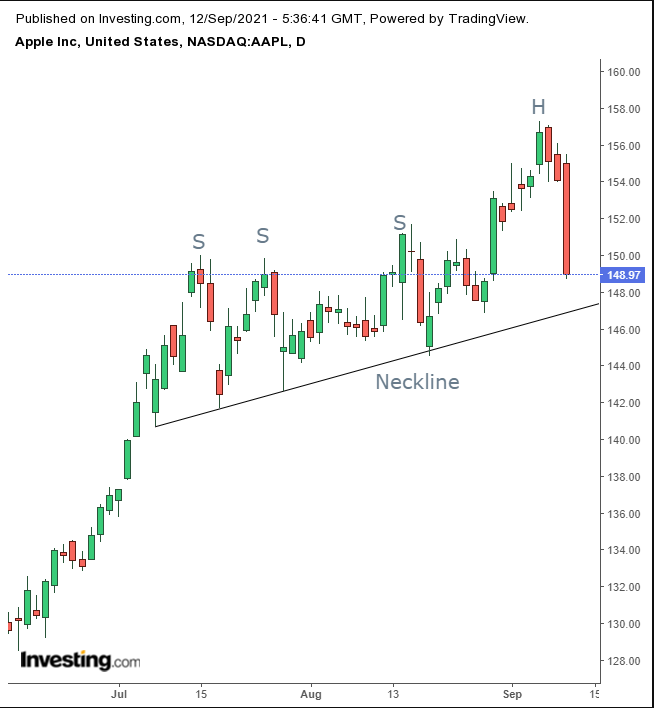 The stock’s decline may have formed the head of a H&S top.

Yields, including for the benchmark note, climbed on Friday as well as for the week, but Treasury investors still seem out of sorts. 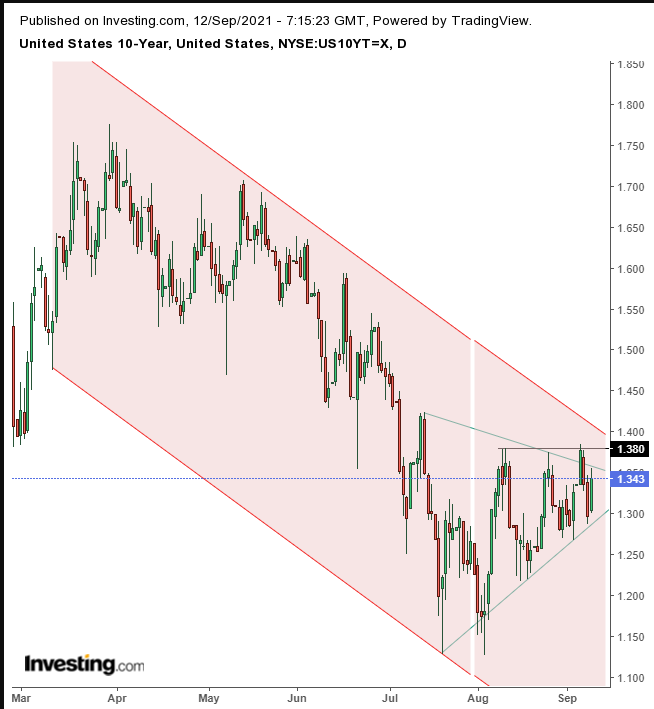 It isn’t clear whether yields are developing a H&S bottom, a continuation Symmetrical Triangle, or an Ascending Triangle. For now, we’re keeping to the downtrend, as marked within the falling channel. 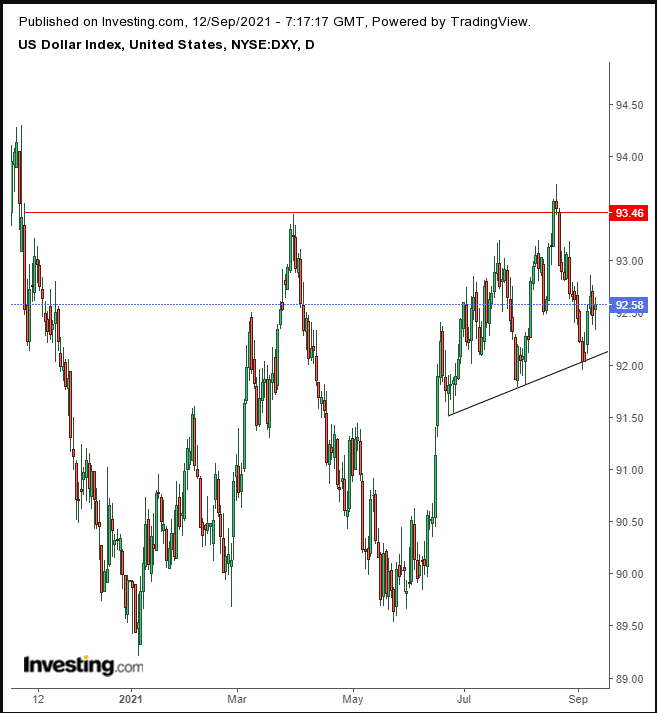 The greenback has been developing a H&S top beneath the neckline of a massive double bottom.

As commonly occurs, provided a mirror image to the dollar’s activity. 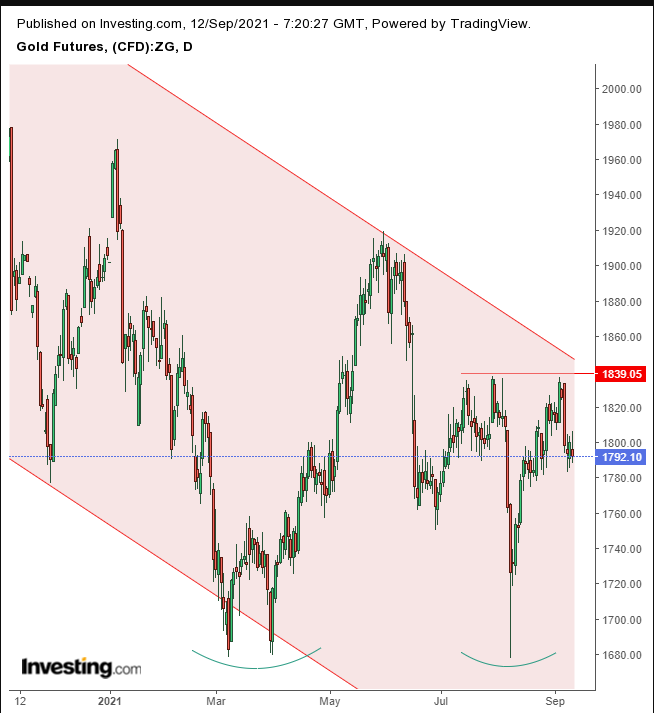 The precious metal is developing a potential H&S bottom. Note, the head is aligning with the March lows, potentially setting up a larger double-bottom. On the other hand, the yellow metal is still trapped within its falling channel since its 2020 record peak.

plummeted for the week, erasing nearly four weeks of gains. Billionaire investor Leon Cooperman warned that rising inflation will hurt Bitcoin and noted that for anyone nervous about the crypto asset, gold provides a better store of value. 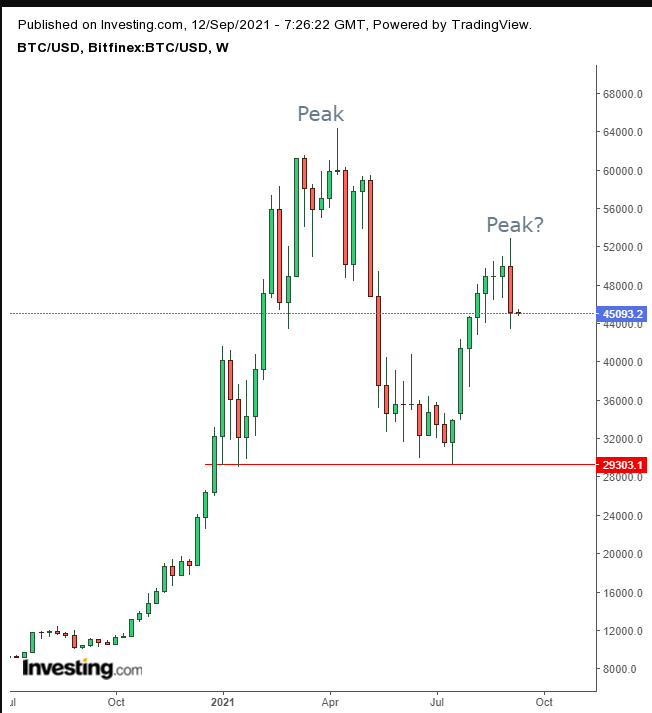 The cryptocurrency’s weekly plunge may be the start of a second, lower peak, signaling the beginning of a downtrend.

All times listed are EDT