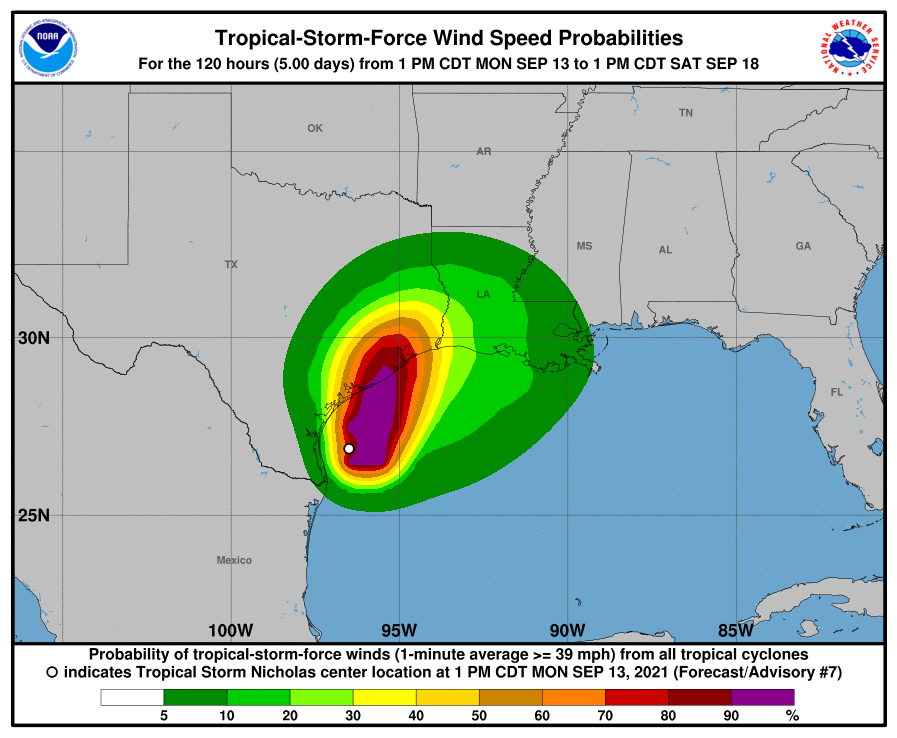 
With Tropical Storm Nicholas beginning to hammer the state’s coastline, Texas Gov. Greg Abbott on Sept. 13 issued a state disaster declaration for 17 counties, and Gov. John Bel Edwards requested a pre-landfall Federal Declaration of Emergency in a letter to President Joseph R. Biden in anticipation of the storm’s entry into his state.

The storm is expected to bring significant rainfall, storm surge and flooding to both states.

“Texans throughout the Gulf Coast should prepare now for the impact of Tropical Storm Nicholas, which is expected to bring severe rain and flooding to these communities,” Abbott said in a media release. “The State of Texas is working closely with officials on the ground to provide the resources and support needed to keep our communities safe, but it is up to all Texans in the path of this storm to take precautions, heed the guidance of officials, and remain vigilant as this severe weather moves through Texas.”

As of 7 pm CST on Sept. 13, Nicholas was lashing portions of the central and upper Texas coasts with heavy rains, strong winds and storm surges, the National Hurricane Center reported. Maximum sustained winds had increased to near 70 mph with higher gusts. The center of Nicholas is expected to make landfall along the central Texas coast later tonight.

Some additional strengthening is possible, the NHC said, and the storm possibly becoming a hurricane by the time it makes landfall. Nicholas is anticipated to weaken on Tuesday and Wednesday as it moves over land. Still, the storm is forecast to bring heavy rainfall and potentially damaging flash flooding not only to Texas but also to Louisiana and Southwest Mississippi through the middle of the week.

Gov. Edwards’ office reported that a pre-landfall federal disaster declaration will allow Louisiana to mobilize federal resources the state already has in place as well as to request additional resources if needed.

Louisiana continues to recover from Hurricane Ida, which hit Southeast Louisiana on Aug. 29, as well as from last year’s Hurricane Laura, which devastated Southwest Louisiana.

“The ongoing storm recovery will be a compounding threat because homes are already damaged, people are already displaced and storm debris from Ida could be blocking drainage systems, causing rainwater to accumulate more quickly than normal, which will potentially enhance the flash flooding threat,” Gov. Edwards said in a media announcement. “I hope that no one dismisses this threat just because Nicholas is not expected to become a hurricane. I’ll remind everyone that Ida caused significant problems all the way into the Northeast due to flash flooding and tornadoes.”

“The most severe threat to Louisiana is in the Southwest portion of the state, where recovery from Hurricane Laura and the May flooding is ongoing. In this area heavy rain and flash flooding are possible. However, it is also likely that all of South Louisiana will see heavy rain this week, including areas recently affected by Hurricane Ida,” Gov. Edwards said.