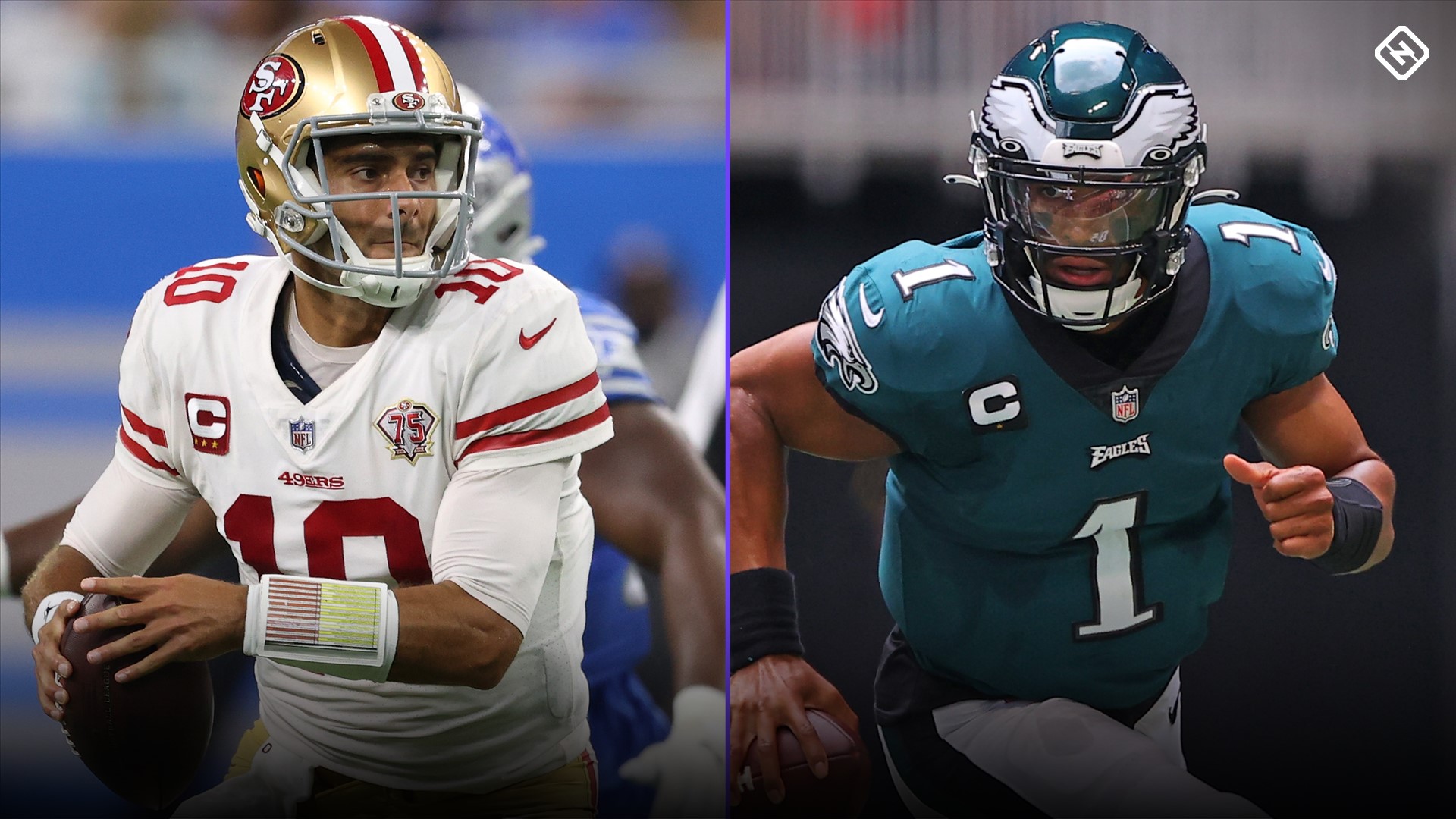 
It’s only Week 2, but there are just three games between unbeaten teams on the NFL schedule.

Two of those games are in the NFC. The San Francisco 49ers travel to Philadelphia in what could be one of the more-entertaining games of the day. The 49ers are a road favorite worth watching. New Orleans travels to Carolina for a matchup between NFC rivals. Will Jameis Winston build on an impressive Week 1 performance?

The third matchup will be determined by Monday night’s winner. Las Vegas meets Pittsburgh, and the much-anticipated Sunday Night Football matchup between Kansas City and Baltimore features another round of Patrick Mahomes against Lamar Jackson.

Each week, Sporting News will pick games straight up. Here’s how we did last week:

With that in mind, below are our picks and predictions for Week 2:

NFL POWER RANKINGS: Big bumps for Steelers and Saints, but how about that NFC West?

It’s a battle of 0-1 teams, and Taylor Heinicke could be the starter for Washington after Ryan Fitzpatrick went down with an injury in Week 1. Saquon Barkley gets more carries in this game, which is a defensive struggle to the max. The Giants make it six in a row in this NFC East series.

It’s a battle of rookie quarterbacks in Mac Jones and Zach Wilson, and it comes down to which quarterback can be more efficient. Wilson completed 54.1 percent of his passes and took sacks in Week 1. Jones completed 74.4 percent and took one sack. The Patriots win a tight one.

Is the Urban Meyer era already in jeopardy? It will be a challenge against Denver’s Teddy Bridgewater, who had the second highest completion percentage in Week 1 at 77.8. Jacksonville needs to get more of a running game going behind Carlos Hyde and James Robinson. Still, it’s the home opener or Trevor Lawrence, and we think he delivers a memorable moment.

The Bills were upset in Week 1, which puts more urgency on a road AFC East matchup against an improved Dolphins team. Josh Allen is 5-1 as a starter against Miami.

This is one of the few NFC matchups between 1-0 teams, and the 49ers looked like a Super Bowl contender with a healthier team. Deebo Samuel and George Kittle will create mismatches, and San Francisco will build an early lead. The Eagles rushed for 173 yards in Week 1. San Francisco will make that job a lot more difficult.

The Colts dominated time of possession in Week 1 but simply couldn’t finish drives for touchdowns. Matthew Stafford enjoyed a stellar debut with the Rams, but this is one of those time-zone trap games that could lead to a closer game than expected. The Rams have been a .500 team on the road the last two seasons.

The Steelers silenced some critics with a key victory against Buffalo in Week 2. Now, they get the Raiders on a short week. Look for rookie running back Najee Harris to see better results in his second game, and T.J. Watt will ignite the pass rush.

The Bengals still have work to do, but there is a belief around No. 1 pick Joe Burrow that showed in the overtime victory against the Vikings. Chicago needs to move Justin Fields from role player to starter to start the same chain reaction. Instead, Burrow will engage in a duel with former Bengals quarterback Andy Dalton. Ja’Marr Chase plays hero again, and the Bengals are the early surprise 2-0 team.

The Browns lost a heart-breaking opener to the Chiefs, but Baker Mayfield proved the Super Bowl-contender hype is justified. Tyrod Taylor, who Mayfield replaced in Cleveland, makes his return with a lesser supporting cast. This is the type of game the Browns should control from start to finish.

The Saints were masterful in attacking the Packers in Week 1, and Jameis Winston proved he can be effective in a high-percentage offense built around Alvin Kamara. New Orleans’ defense also is improved, and they’ll force a few turnovers from Sam Darnold. New Orleans is a road favorite we like. They are 8-3 ATS as a road favorite since 2019.

Kyler Murray flourished in Week 1, and the Cardinals showed an improved defense with bookends Chandler Jones and J.J. Watt. Can they win a grind-it-out-game against Minnesota, which will slow that tempo around Dalvin Cook? We’re going to trust Arizona.

Cue the Tom Brady-Atlanta jokes. There won’t be a need for a giant comeback in this one. Brady averaged 394.5 passing yards in the two meetings against the Falcons last season, and another monster game awaits.

We’re tempted to take the Titans here because of the desperation factor, but the defense was shaky in Week 1 and Russell Wilson can replicate all those issues for the defense. Both teams light it up in the passing game, but Seattle survives.

The Chargers won on the road in the opener, and they have a chance to drop Dallas to 0-2. Justin Herbert will enjoy another 300-yard game, but Dak Prescott keeps that Dallas offense moving. Per usual, the Cowboys play in one of the most-entertaining games of the day.

The Chiefs have won the last two meetings at Baltimore by double digits, and Lamar Jackson is 0-3 in three career starts against Patrick Mahomes. The Chiefs have led by an average of 14 points at halftime in those games. Baltimore keeps it closer, but Mahomes delivers in the clutch.

The Packers didn’t look like a team that should be favored by double digits after putting up a league-low 229 yards in Week 1. Green Bay has won the last four meetings, but three of those games were decided by seven points or less. Detroit showed fight in a comeback in Week 1, too. Aaron Rodgers gets the Packers back on track, but it’s not easy.