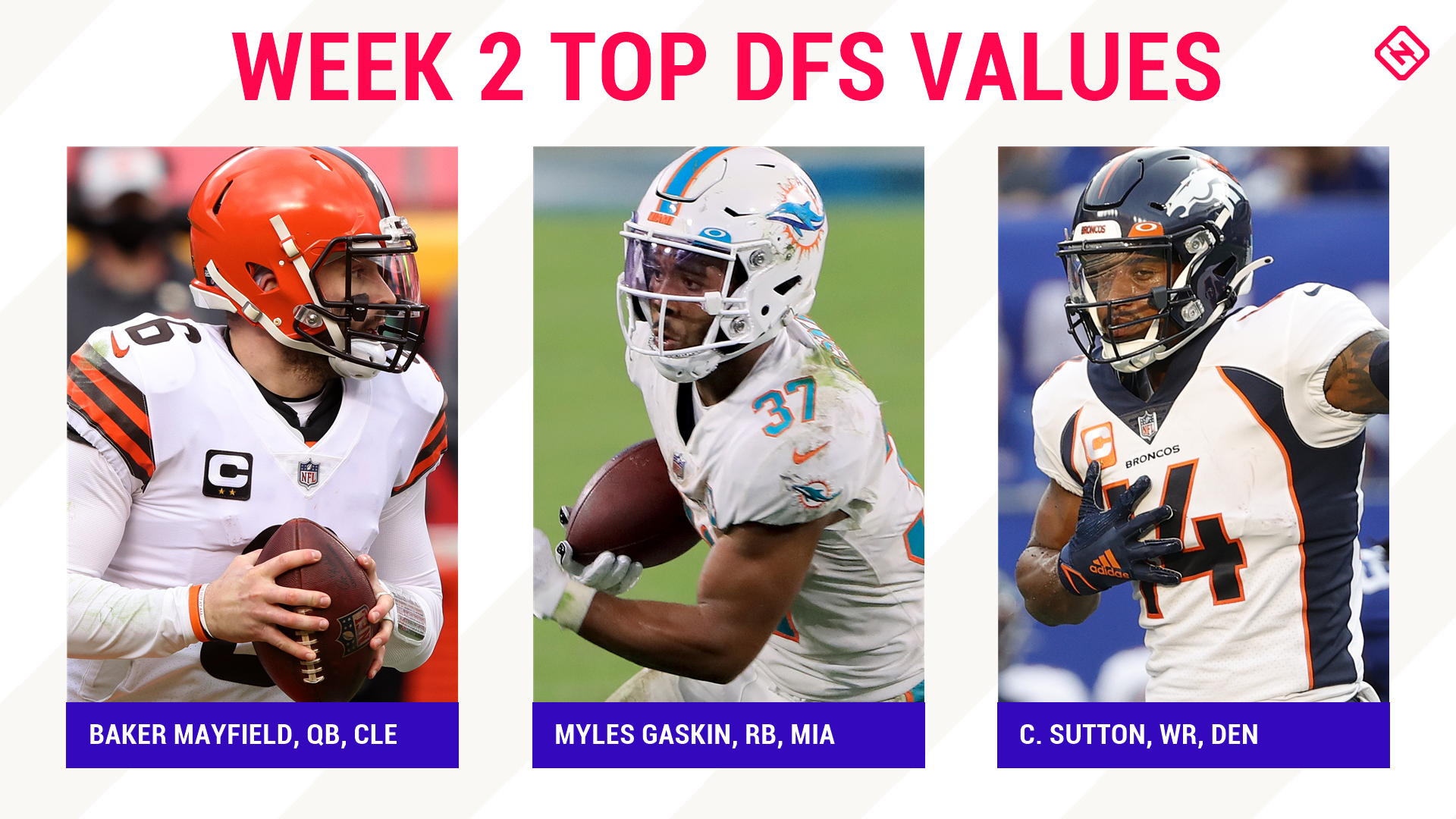 Wow, what a wild opening week the NFL just closed the books on. We witnessed some major upsets, a litany of offensive shootouts, and a ton of impact plays by rookies. We saw low-cost daily fantasy football sleeper picks serving as diamonds in the rough, and we endured more than a handful of high-priced duds. It was a roller coaster ride of an opening weekend, perhaps foreshadowing a crazy (record-breaking?) year of fantasy football and NFL DFS, which is music to the ears of those looking for sleeper and value picks for DraftKings and FanDuel contests every week.

If you’re a fan of DFS or you just like to find an edge or angle with all your football-related bets, this column will be up your alley all season. Each week, I scour the player pools on the two biggest DFS sites and compile a list of values to help you win some cold, hard cash. The more value players you add, the more money you will have to spend on proven weekly studs at other position spots.

If you read this column last week, you would have benefited from our advice to plug a plethora of low-cost, high-value players into your DFS lineups. Here’s a list of some of our hits from Week 1, including each player’s cost and final fantasy output:

Selecting any of these under-the-radar and/or cost-efficient players would have afforded you the ability to plug in other more high-profile names elsewhere. Getting the most bang for your buck has always been the name of the game in classic DFS formats, so it’s important to do your due diligence before constructing lineups. Leave the deep-diving to us — we’re here for you from the first kickoff through the last play of the 2021 NFL season.

All player values are from DraftKings and FanDuel. All stats are from NFL.com and Pro Football Reference.

We had Mayfield here last week against the reigning AFC champion Chiefs, and he almost game-managed the Browns to a road upset win. To be fair, running backs Nick Chubb and Kareem Hunt played more impactful roles in Cleveland’s near-victory, but Mayfield eclipsed 320 yards and only had one INT. He should be able to secure a touchdown or two against the Texans, who felt like playoff contenders in their 37-21 Week 1 rout over the upstart Jaguars. Newsflash: Cleveland has a much better team than Jacksonville at just about every level. Plus, this one’s at the Dawg Pound. The Texans allowed teams to average 29 points/game last season (sixth most in the NFL), and in road games they allowed QBs to pass for an average of two TDs (eighth most). I like Baker to post two dozen points Sunday.

Sometimes, a regular season debut comes hard at rookie QBs. Nobody but Lawrence knows how much pressure the No. 1 pick of the 2021 NFL Draft was feeling on Sunday. At the end of the day, this is a 21-year-old kid — playing in a brand-new offense — in a grown man’s league. That’s why I give Lawrence a ton of credit for his debut performance. He amassed 332 yards and three TDs. Never mind the three picks or the 23 incomplete passes — 332 yards and three scores is a solid effort. Remember that Jags head coach Urban Meyer is adjusting to his first days in the NFL, too. I think Lawrence and Meyer will both be more prepared against the Broncos at home, and I expect far fewer mistakes out of the rookie against a shaky Denver secondary. That’s not to say he won’t throw a pick, I’m just saying he’s going to be well worth these prices on volume alone and won’t be this cheap for much longer.

Forget the standings after one week of NFL play — Jones should be holding his head high going into Week 2. Jones passed for 281 yards and a touchdown against a strong Dolphins defense and put the Patriots in a position to win at the end of regulation. Unfortunately, his running back Damien Harris put the ball on the turf on Miami’s nine-yard line with 3:31 left, and the ‘Phins ultimately won 17-16. The Jets should present an easier challenge, and with his debut game under his belt, I fully expect Mac to lead New England to a road victory. Carolina’s Sam Darnold threw for 279 yards and a score in his “Revenge Game” against the Jets last week, and I project Jones at over 300 yards and two scores Sunday. He’s a steal at $5,400.

I own a decent amount of Gaskin shares across my seven fantasy leagues, as I think he has the potential to be a league-winner at his modest average draft position. Similarly, I also think he can help you win a DFS contest or two at $5,900. Gaskin didn’t light the world on fire against the Patriots last week, but he did see the bulk of Miami’s carries as well as the majority of Tua’s targets out of the backfield. Buffalo often struggles to defend dual-threat backs, so I’m in on Gaskin in Week 2.

MG3 hit for us at $5,300 last week, and he only jumped $600 despite a juicy Week 2 matchup with the Jags. Jacksonville allowed Houston — yes, Houston — to amass 160 rushing yards last week, including 85 yards and a score to Mark Ingram (who is like 40 years old) and 25 yards and a score to former Bronco Phillip Lindsay (who’s like 5-foot-4). Gordon still has plenty of early-season upside, and he should enjoy plenty of scoring opportunities both on the ground and through the air in this one.

With Raheem Mostert expected to miss up to eight weeks with chipped knee cartilage (and a subsequent scope procedure), Mitchell should become the darling of Week 2 waiver wires nationwide. He will also be a hot commodity in DFS at such affordable prices. The rookie out of Louisiana rushed 19 times for 104 yards and a score in San Francisco’s Week 1 win over the Lions, which should assure him at least double-digit touches in Philly this weekend. Fellow rookie Trey Sermon, a healthy scratch last week, could still play into the Niners’ always-diverse backfield equation, but I liked what I saw from Mitchell. And at $5,000 in a PPR, what’s not to like?

Many fantasy owners avoid AB because of his personal conduct problems and off-the-field issues the past couple years, but there are indisputable facts you cannot overlook if you’re simply trying to construct the best possible DFS lineup. For one, he’s still a massively talented NFL receiver playing on a reigning Super Bowl-champion offense. And his QB, arguably the best to ever play the game, appears to love him almost as much as he loves Rob Gronkowski. If Brown continues to receive a 25-30 percent target share and he stays healthy and out of trouble, he could be a league-winning fantasy asset for millions of redraft teams. If he stays at $6,000, with the way he was blistering the Cowboys’ secondary, he will win you plenty of DFS cash, too. The Falcons just made Philly BFFs Jalen Hurts and DeVonta Smith look like All-Pros, so sign yourself up for the Tom and AB Show now before it’s too late.

Sutton’s teammate Jerry Jeudy, widely picked as a 2021 fantasy breakout, sadly suffered a high ankle sprain last weekend against the Giants. That should keep Jeudy in street clothes for at least a month, putting the immediate onus on Sutton to return to his 2019 level of Pro Bowl productivity. That’s a tall order, as Sutton just finished rehabbing his September 2020 ACL tear, and he saw limited action last week in New York. But I’m betting on the kid, who seems to be a favorite of both Denver QB Teddy Bridgewater and head coach Vic Fangio. I like Sutton to find paydirt Sunday, something he did 10 times across his first two seasons.

It’s funny, WR2s from nearly all the high-powered passing offenses tend to get drafted in every fantasy league and purchased for $5,500 and up in DFS — just not Christian Kirk. Most recently, the 24-year-old fourth-year receiver caught all five of his targets for 70 yards and two touchdowns in Tennessee. Of course, he won’t continue to catch 100 percent of the passes thrown his way or receive such a high red-zone target share, but with All-Pro DeAndre Hopkins, rookie speedster Rondale Moore, and seven-time Pro Bowler A.J. Green around him, Kirk should see plenty of opportunities to produce out of the slot this season. Last weekend, the Vikings got roasted by stud rookie Ja’Marr Chase (5-101-1) and, to a lesser extent, second-year wideout Tee Higgins (4-58-1). ‘Nuk and Kirk should benefit similarly at home this week.

Football fans everywhere witnessed vintage Gronk in the NFL season opener last Thursday. The future Hall of Famer hauled in all eight of his targets for 90 yards and two TDs, proving to be a massive factor in the Buccaneers’ 31-29 comeback win over the Cowboys. If the veteran bruiser stays healthy, he should be able to maintain a huge role in the NFC’s top offense. The Falcons got burned at home by Philly’s tight ends last week, surrendering a combined 6-76-1 to Dallas Goedert and Zach Ertz. A sub-$5,000 Gronk is a valuable Gronk, especially at home vs. Atlanta.

I guess I’m into the Broncos this week, but, hey, the prices are right! Fant pulled in six of his eight targets last week in New York, finishing with 62 receiving yards on the day. With the aforementioned Jeudy out for a month or two, Fant essentially vaults up to the role of No. 2 pass-catcher in this offense. Jacksonville perennially struggles to defend route-running tight ends, so fire up Fant, do a little dance, and get down tonight (shout out, KC & the Sunshine Band!).

Savvy fantasy owners in redraft leagues stashed Cleveland in Week 1, despite the Browns’ Week 1 date with the Chiefs at Arrowhead. The reason: They had Houston at the Dawg Pound on deck. Regardless of whatever happened to Jacksonville last week, the Texans should be one of the more generous squads to D/STs this year. The Browns have a perennial Defensive Player of the Year candidate in edge rusher Myles Garrett and plenty of depth in the secondary. Tyrod Taylor will not throw for another 291 yards and two scores this week, nor will Mark Ingram collect 85 yards. Play the Browns at home with confidence.