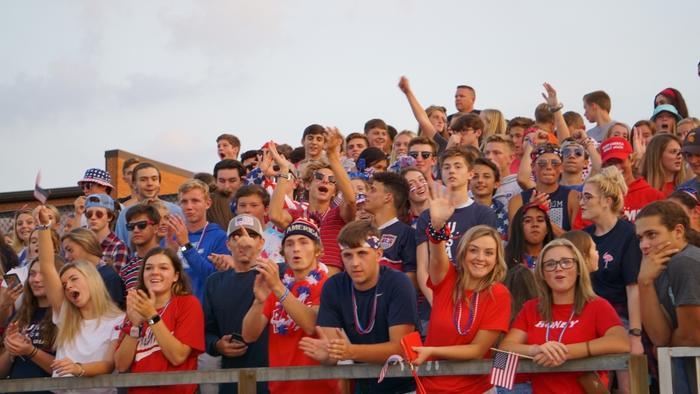 
Controversy erupted this past weekend at a Washington State high school over plans to commemorate the 20th year anniversary since the September 11 terror attacks. Students at Eastlake High School in the city of Sammamish had organized and planned to simply wear red, white and blue clothing to a patriotic-themed football game, but were told by school administrators that it would be “racially insensitive”.

A local media report said the patriotic commemoration was shut down because American flag colors might “unintentionally cause offense to some who see it differently” – and that specifically it could be could be “racially insensitive and offend some people.”

It was described as a last minute cancelation and caused outrage among students and parents, particularly given the school has no basis on which to ban clothing that doesn’t fit the category of crude or offensive. Instead the school literally told students not to wear red, white and blue to the game.

A school principal had reportedly sent an email to parents explaining that while the school understands “sacrifice and values our flag represents,” but ultimately that school leadership “just did not want to unintentionally cause offense to some who see it differently.”

The school never explained just what about red, white and blue coloring would be “offensive” to anyone. Later the school district’s communications director claimed there wasn’t enough time before the game to let everyone know about the patriotic-themed event. The school also at one point suggested the display could cause offense to the other team without enough advanced warning.

“Since it was not a home game, there was no opportunity to have an announcement about Patriots Day and to share why students were dressed in red, white and blue,” communication director Shannon Parthemer was cited in local reports as saying.

Absurdly, the school is essentially saying that display of American flag and its colors must come with an advanced “trigger warning”.

NEW: Students were set to wear red, white & blue colors at their football game to honor the lives lost on 9/11.

But school staff pulled the plug.

The principal said it could “unintentionally cause offense to some who see it differently.”https://t.co/lAcE5r7N7K

One angry parent speculated as to the assumptions driving the school’s bizarre decision-making “The leadership and equity team decided that since it was against a predominantly Black team they did not want to ‘unintentionally cause offense to some who see (our flag) differently,’” the parent said.

A local conservative talk radio show further captured the fierce pushback among much of the student body as follows:

Ryan Ware is the Eastlake senior class president and member of the football team. He said students were eager to wear red, white, and blue clothes and were disappointed by the school administration’s decision.

“We disagreed and were extremely disappointed. I couldn’t believe their reasoning,” Ware explained to the Jason Rantz Show on KTTH.

One other student noted the hypocrisy on display. The school is about inclusivity — just not when it comes to representing the country?

“I was instantly upset, and frustrated,” one student emailed. “If Eastlake is all about including everyone’s beliefs and being together as a ‘family,’ then why are we being told we can’t represent the country we live in? I have seen other [Lake Washington School District] football teams that held a flag or did some sort of memorial recognition towards 9/11, but apparently we weren’t allowed to even wear USA colors.”

The frustrations expressed tended to point to the school’s hypocrisy, given in past years it’s talked up and emphasized “inclusivity” – yet this apparently excludes public displays showing a minimal level respect to the United States and past Americans who have paid the ultimate sacrifice.