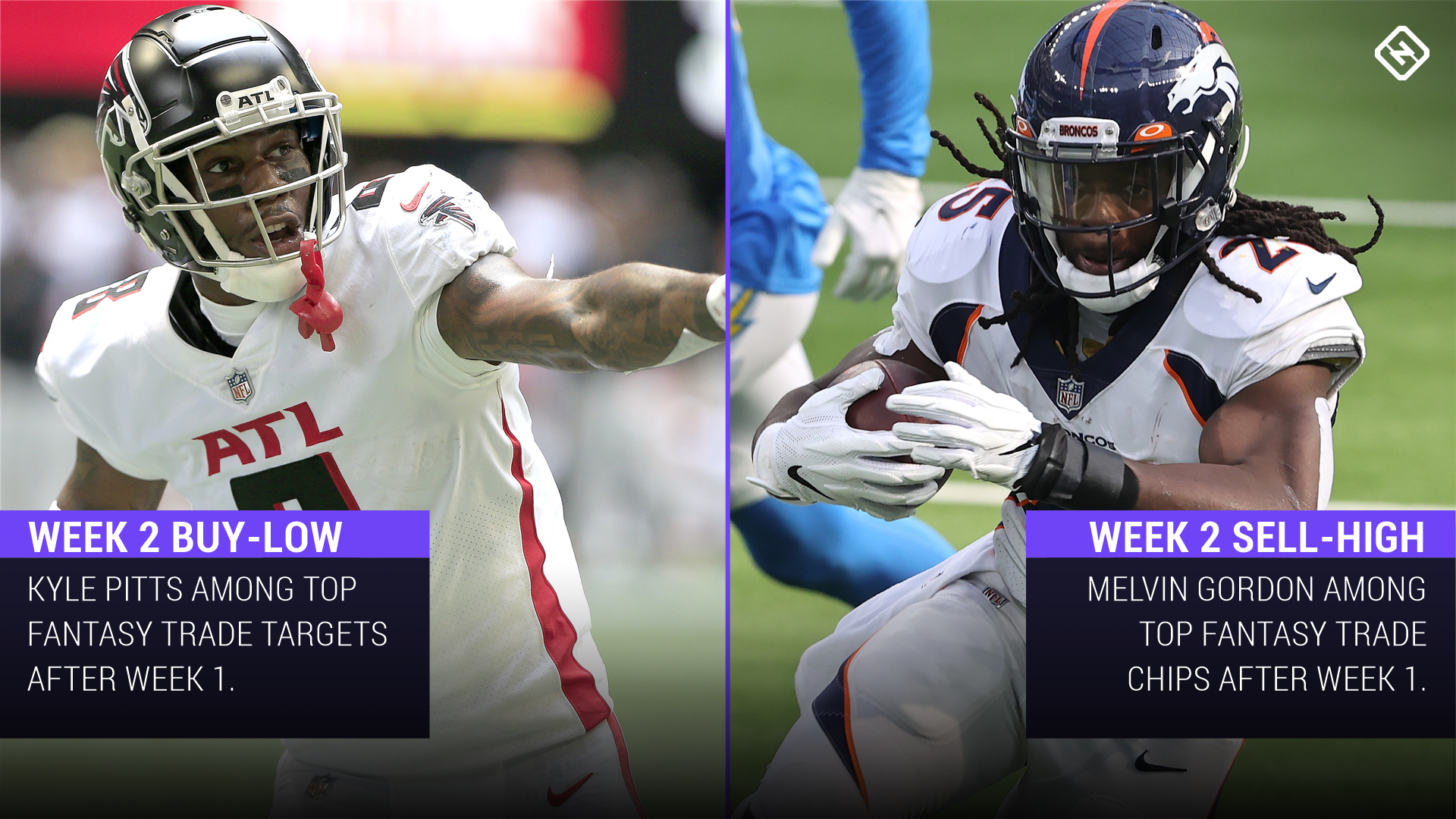 Welcome to national “Fantasy Football Overreaction Week” (to be followed quickly by “Fantasy Football Overreaction Week Part 2”). Yes, as we head into Week 2, fantasy owners either have fury in their hearts from disappointing performances, or they’re dancing with joy after a preseason sleeper hit big. Many want to drop half their roster, while others think they’ll never need to make a waiver wire pickup again. Of course, we’ll all think the opposite next week, so it’s important to remain level-headed. Still, fantasy owners should always be on the lookout for the right buy-low, sell-high trade targets, and FantasyPros is here to help with tips and trade advice in their Week 2 Stock Watch that includes Aaron Jones, Kyle Pitts, James Robinson, Melvin Gordon, and Brandon Aiyuk, among others.

Most fantasy owners don’t like to trade this early in the season. Generally, we’d agree with that strategy. There are still far too many unknowns to make any rash deals, but, again, you should always be on the lookout for a good opportunity. If an impetuous owner has already given up on, say, Ezekiel Elliott, then see if you can get him for 50 cents on the dollar. Even if you’re not a big Elliott fan this year, there’s a point where he becomes good value. Likewise, if you have a player who went off in Week 1 and want to see what you can get for him, don’t be shy. Worst case, you don’t get what you’re asking and you see how he does next week. If he does well again, well, then the chances of a trade are even more likely.

Remember, values can change quickly in fantasy football, so don’t get too locked in on a certain trade target. Change your thinking as the trends change, but don’t be afraid to strike if you have a good offer on the table, even this early in the season. — Matt Lutovsky

Aaron Rodgers arguably played the worst game of his NFL career on Sunday, and the Packers’ offense really struggled as a whole. Jones, a top-five player in redraft leagues this season, totaled seven touches for – wait for it – 22 yards against the Saints. It’s unlikely that Jones is being shopped in your league, but he’s worth checking in on. If you roster Jones, this “buy” label should serve as your reminder to remain patient.

Bills-Steelers was one of the weirder games of the weekend. Harris didn’t erupt in his first game in the league, but it doesn’t matter. He played on all 58 offensive snaps. Every. Single. One. Fantasy football is a volume game. Don’t overthink it. Buy Harris.

The Browns didn’t play OBJ (knee) in Week 1, but don’t panic. They were just being cautious. Perhaps we shouldn’t bet on Beckham producing meaningful stats early in the season, but we like his chances at finishing strong. If that’s a profile that fits your team, then go get him.

The highest-drafted tight end ever enters the NFL with a locked-in prominent role within his team’s passing offense. Pitts is often described as a unicorn, a player who we all think can overcome the mostly negative history of rookie tight ends in fantasy football. In addition to his own talent, the case for Pitts lies in how much volume he could see. His offensive environment is also positive, headlined by the underrated Matt Ryan and the forward-thinking Arthur Smith. We knew Pitts’ season had a volatile range of outcomes, leading to 41 yards on three receptions in Week 1. The good news is he still had eight targets, which is impressive for a rookie. It’s time to buy the dip.

The 2020 undrafted free agent legitimately won people championships last season, so he’s someone we want to root for. Robinson’s value fluctuated throughout the offseason, but things seemed to be on the rise once Travis Etienne (knee) went down. Enter Urban Meyer. It’s fair to question his NFL coaching chops following an embarrassing Week 1 loss to the Texans. Jacksonville never really had a chance in this one, which is still stunning to say, but Robinson was underutilized. He played on 46 offensive snaps while Carlos Hyde played on 25. Furthermore, Robinson was actually out-carried by Hyde. A lot of Hyde’s carries came with the game no longer in doubt, but Hyde did get the first three carries of the game for the Jaguars, too. It’s worth remembering that J-Rob lived off volume as a rookie. If he doesn’t have that, then he simply can’t be viewed as highly.

The final stat line looks tremendous – 101 yards and a score on 11 attempts while mixing in for three receptions and an additional 17 yards. Those numbers were highly inflated by a 70-yard scamper, however, in the fourth quarter. It was a great run that really opened an opportunity for Gordon managers to trade him away and profit. As the season moves along, this backfield should trend more and more toward Javonte Williams, who actually had three more carries than Gordon in Week 1. The Jaguars and Jets the next two weeks are two appetizing matchups to try and sell would-be-buyers on.

The Week 1 upset over Jacksonville was inspired, and perhaps Cooks will “volume” his way to a solid fantasy campaign. For me, I’m looking to cash in on 132 yards against a woeful Jaguars secondary.

This could be one we end up regretting because we don’t want to overreact to one week. However, there’s a new coaching staff in L.A., so there’s certainly a chance the Chargers will use players differently than the previous regime. For Ekeler, that meant receiving zero targets in the passing game. The good news is he was given a goal-line carry en route to rushing 15 times for 57 yards and a score. Perhaps this was matchup-based, but it’s still strange. If similar usage continues in Week 2, then Ekeler will be an easy sell candidate. He needs those receptions.

The second-year wideout received a whopping zero targets in Week 1. This certainly wasn’t what fantasy owners were expecting, and it’s troublesome that Kyle Shanahan has a history of putting receivers in the doghouse (think Dante Pettis). Aiyuk isn’t a “sell” because we’d be trading him at his lowest point. He also isn’t a “buy” because there is some risk involved until we figure out what’s going on. For now, hold.