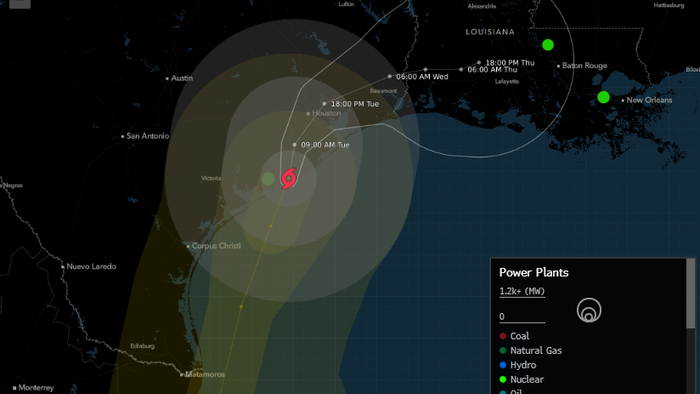 
Hurricane Nicholas made landfall early Tuesday morning on the Matagorda Peninsula just south of Houston, Texas. Nicholas hit the area as a Category 1 but has since been downgraded to a tropical storm with maximum sustained winds of 70 mph. Oil refiners, chemical makers, grain exporters, and even multiple nuclear power plants are in its path.

What’s on our radar this morning is the storm passing over the nuclear power station southwest of Bay City, Texas, about 90 miles southwest of Houston. The 12,200-acre site is home to South Texas Project Electric Generating Station. The storm is forecasted to arrive in oil and gas heavy Houston around 1800 local time.

At the moment, about 340,000 customers are without power in Southeast Texas.

Storm impacts and energy outages could be problematic for COVID hotspots.

Nicholas emerged on our radar last Friday as a tropical wave over Honduras, the western Caribbean Sea, and has since organized and strengthened into a hurricane and now downgraded to a tropical storm.

The National Hurricane Center (NHC) expects storm surges of 2 to 5 feet and up to 18 inches of rain in some areas over southeast Texas. Some of these areas are crammed with industrial facilities, and even coastal neighborhoods could be prone to flooding. One area to watch for flooding is Houston:

“Houston is in the crosshairs,” Steve Silver, a senior meteorologist with Maxar, noting that precipitation poses a bigger threat than wind, told Bloomberg. Nicholas will be “a significant rainfall event.”

The storm’s timing is precarious for the oil/gas industry that has been crushed by Hurricane Ida, hitting neighboring Louisiana two weeks ago. Oil-refining and offshore drilling have been paralyzed in the wake of the storm. Making matters worse, Nicholas could make its way to Louisana by early Wednesday into late Thursday.

Currently, 44% of U.S. Gulf crude production is offline, while 52% of the region’s gas output is down. This has put a bid under natgas and crude prices.

“Investors were worried that Nicholas would cause further disruption in the Gulf Coast at a time when they were trying to figure out how long crude output would stay affected from Ida,” said Satoru Yoshida, a commodity analyst at Rakuten Securities.

The International Energy Agency said losses from Hurricane Ida have wiped out increases from OPEC+. The organization said additional supplies would come online in October.