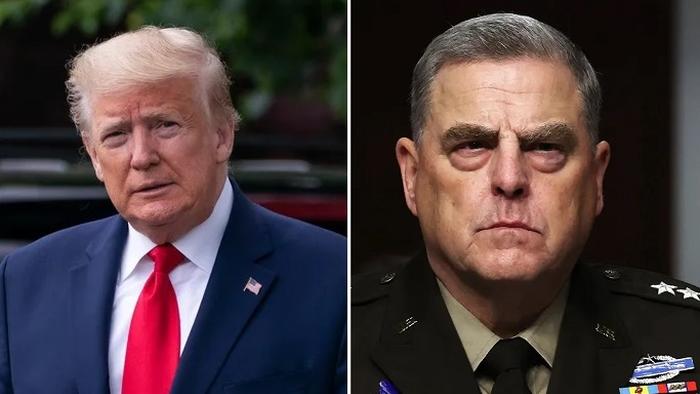 
Joint Chiefs Chairman Mark Milley – who just facilitated the transfer of billions of dollars of US military hardware to America’s enemies during the botched Afghanistan pullout – engaged in a ‘top-secret’ mission to undermine President Trump’s ability to order military strikes or launch nuclear weapons following the Jan.6 Capitol riot, according to a new book by Bob Woodword and the Washington Post‘s Robert Costa.

Milley’s treasonous effort was out of fears that Trump could ‘go rogue,’ according to CNN.

“You never know what a president’s trigger point is,” said Milley – who just separated an entire family of Afghan civilians from their mortal coils in a haphazard drone strike.

Milley took extraordinary action, and called a secret meeting in his Pentagon office on January 8 to review the process for military action, including launching nuclear weapons. Speaking to senior military officials in charge of the National Military Command Center, the Pentagon’s war room, Milley instructed them not to take orders from anyone unless he was involved. -CNN

“No matter what you are told, you do the procedure. You do the process. And I’m part of that procedure,” said Milley, unconstitutionally, before going around the room and ‘looking each officer in the eye, asking them to verbally confirm they understood.’

“Milley considered it an oath,” wrote the authors.

Meanwhile, Milley also had two ‘back-channel phone calls’ with China’s top general in the waning days of the Trump administration.

Woodward and Costa also write that ‘some might contend that Milley had overstepped his authority and taken extraordinary power for himself,’ but he believed his actions were ‘a good faith precaution to ensure there was no historic rupture in the international order, no accidental war with China or others, and no use of nuclear weapons.’

Milley’s actions against a sitting president have sparked outrage and calls for his ouster.

Milley needs to go. No excuses.

I know we’re supposed to be all worried about how crazy Trump was in this story but this, if true, is legit treason. pic.twitter.com/BmXmZlHPyX

In addition to being an incompetent woke buffoon, Milley is apparently also a traitor. https://t.co/ap6S26zGyt