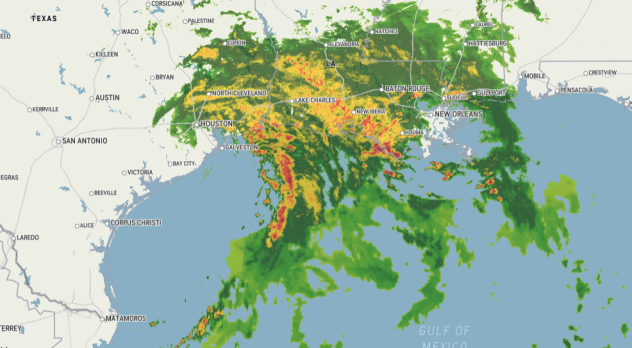 
Nicholas made landfall as a hurricane, packing 75-mph winds, on the coast of Texas on Monday night, and AccuWeather forecasters say the slow-moving storm will unleash life-threatening flooding along the Texas Gulf Coast, around the greater Houston area and across parts of Louisiana. Due to the significant threat of flooding the storm will pose, Nicholas has been rated a 1 on the AccuWeather RealImpact Scale.

Since making landfall Monday night, Nicholas has lost some wind intensity and was designated a tropical storm as of Tuesday morning. Regardless of the change in designation, forecasters say Nicholas will be able to unload a deluge of rain along the Gulf Coast this week.

As of 10 a.m. CDT Tuesday, Nicholas was located about 10 miles southeast of Houston, Texas. The storm had maximum sustained winds of 45 mph, down 15 mph from just three hours earlier, and was moving to the northeast at a speed of 6 mph.

The storm crashed onshore in the Lone Star state after behaving erratically while moving northward offshore of Texas on Monday. The storm’s center re-formed several times throughout the day. Nicholas is expected to follow a curved path that will take the system northeastward across the upper Texas coast and into southern Louisiana on Tuesday.

The greatest risk to lives and property will be from flooding rainfall. With the forecast track of Nicholas, the heaviest rain will end up over a broad area to the north and east of the center of the storm and that includes a portion of eastern Texas and much of southern and central Louisiana.

Even though steady forward movement is predicted from Nicholas Tuesday, the slow-motion of the storm will funnel a tremendous amount of moisture in from the Gulf of Mexico and produce torrential rainfall along and inland from the coast, including the zone from Beaumont, Texas, to Lake Charles and Alexandria, Louisiana. Rain heavy enough to trigger flooding is forecast to reach the New Orleans area and Gulfport, Mississippi, through Tuesday night.

A general 8-12 inches of rain with an AccuWeather Local StormMax of 24 inches is forecast from the upper Texas coast through much of southern Louisiana. This amount of rain will lead to widespread flash flooding, as well as significant flooding of rivers and bayous.

Tremendous rainfall and disastrous flooding from Harvey in 2017 is still fresh on people’s minds in Texas. The August hurricane unloaded up to 62 inches of rain in the Houston area and along the upper Texas coast as the storm stalled for days over the region.

Even though flooding equal in scope and magnitude to Harvey is not expected from Nicholas, 1-2 feet of rain in 24-48 hours will bring a great deal of water and runoff. That amount of rainfall is two to four times of what is typically picked up during the entire month of September in the region.

“Rapid water rises are expected and could strand motorists and isolate some neighborhoods in this situation,” AccuWeather Senior Meteorologist Adam Douty said.

Rounds of heavy rain and gusty thunderstorms will continue across parts of northeastern Texas, Louisiana and Mississippi into midweek as Nicholas’ rain bands rotate across these areas. Rainfall in these rain bands can be intense and lead to localized flash flooding. Meanwhile, gusty winds in some of the outermost thunderstorms can be strong enough to knock down trees and power lines.

The risk for isolated tornadoes and waterspouts will continue into Tuesday evening along the upper Texas coast and in southern and central Louisiana.

Nicholas, the 14th named storm of the 2021 Atlantic hurricane season, is expected to bring heavy rain to areas of Louisiana still recovering from hurricanes Laura and Delta in 2020. Parts of the state that were struck by Hurricane Ida last month could also be impacted, Gov. John Bel Edwards said. “The most severe threat to Louisiana is in the Southwest portion of the state, where recovery from Hurricane Laura and the May flooding is ongoing. In this area heavy rain and flash flooding are possible,” Edwards said.

“However, it is also likely that all of South Louisiana will see heavy rain this week, including areas recently affected by Hurricane Ida. This hurricane has the potential to disrupt some power restoration and recovery work currently underway. I encourage anyone who has had recent damage from Ida, Laura or other disasters to take necessary measures to protect their home or business from additional harm,” Edwards said.

The strongest wind gusts of 60-80 mph are forecast to occur along the upper portion of the Texas coast for the duration of the storm on Tuesday. Nicholas has been responsible for causing damaging winds and numerous power outages along the Texas coast and in southwestern Louisiana. As of daybreak Tuesday, more than 450,000 utility customers were without power in Texas and Louisiana, according to PowerOutage.us.

During the middle and latter part of this week, rainfall and thunderstorms associated with Nicholas are forecast to move slowly from the Mississippi Delta region to the Tennessee Valley. Heavy rain and flooding can still occur in these areas and overlap in locations that were hit by Ida in late August.