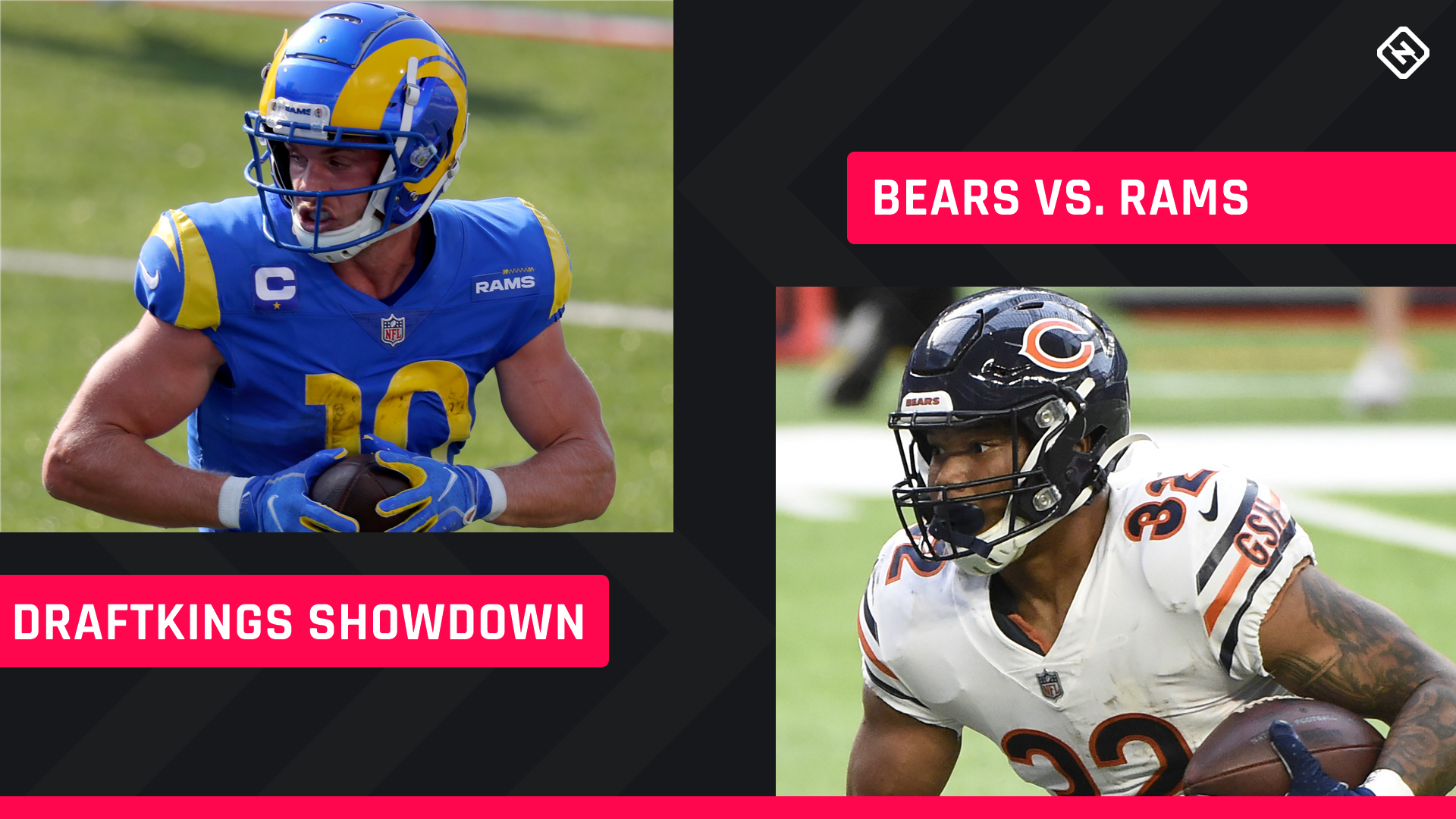 The season’s first Sunday Night Football matchup features a pair of teams with new QBs — at least, new to them. Matthew Stafford and Andy Dalton certainly aren’t new to daily fantasy football players, but with both now under the helm of young, offensive-minded coaches, there’s a renewed hope they can continue to improve (or a hope that Dalton will flame out quickly so the Bears can insert rookie Justin Fields into their lineup). Vegas sportsbooks opened the Rams as 6.5-point favorites with the over/under set at 43.5, suggesting that scoring could be at more of a premium than we might come to expect in Rams games. That’s not what anyone wants for an NFL DFS single-game contest, but with both teams still featuring some top-end talent, we managed to put together what could be a relatively high-scoring DraftKings Showdown lineup.

Before we get into our picks, here are the most notable scoring quirks of DraftKings Showdowns: It’s full-point PPR, and there are three-point bonuses for 300 passing yards, 100 rushing yards, and 100 receiving yards. The Captain pick costs 1.5 times a player’s original price, but he also gets his point total multiplied by 1.5.

Montgomery will be utilized both as a runner and receiver, as he caught 54 passes and had five or more targets on seven occasions in 2020. We’re not necessarily expecting him to immediately reclaim his pace from last season when he eclipsed 27 DraftKings points in five of his final six games, but we like his projected workload and chances for him to pace the field in fantasy scoring.

There are too many weapons at Stafford’s disposal to expect him to fail in this matchup as a home favorite. It doesn’t hurt that, absent a true No. 1 back, head coach Sean McVay might ask a little more from his new signal-caller. Chicago’s revamped defense provides enough of a threat, however, that we’re not willing to pay the premium to name him captain.

A date with Jalen Ramsey is the polar opposite of a favorable matchup, but sometimes talent and volume take precedent in our decision-making process. Moreover, sometimes in DFS, being contrarian is exactly how you win big in contests. Robinson has accounted for 26.2 percent of the Bears’ targets since 2019, and it’s not as if Chicago brought in a pass-catcher who will change that trend. If you can’t bring yourself to bet against Ramsey, Robert Woods ($9,000) locks up what will likely be the two busiest Rams pass-catchers.

We’re looking for the Rams’ WR1, a title Kupp and Woods will share and exchange on a weekly basis. Kupp gets our first bet on the strength of owning a double-digit touchdown season (2019). With a compromised running back corps, it’s not a stretch to suggest the Rams will lean more heavily on their pass-catchers this week (and season).

Feel free to pivot to Sony Michel ($4,800) if you’re bullish on his Week 1 role. However, if the Los Angeles backfield presents too much uncertainty (and not enough pass-catching) for your taste, Gay isn’t a poor choice given the implications drawn from Las Vegas’ betting odds. If the Rams are going to comfortably win a relatively low-scoring defensive battle, it won’t be a surprise to see the kicking game factor prominently into the action.

Even at 34, Jackson can instill fear in coordinators and defenses. Jackson brings a boom-or-bust element to our lineup, as we’re banking on a long-range strike, but Week 1 — when he’s at peak health — is the best time to roll the dice with him. Kupp and Woods will command the Bears’ defensive attention, perhaps allowing Jackson to wriggle free for a high-quality deep target or two.