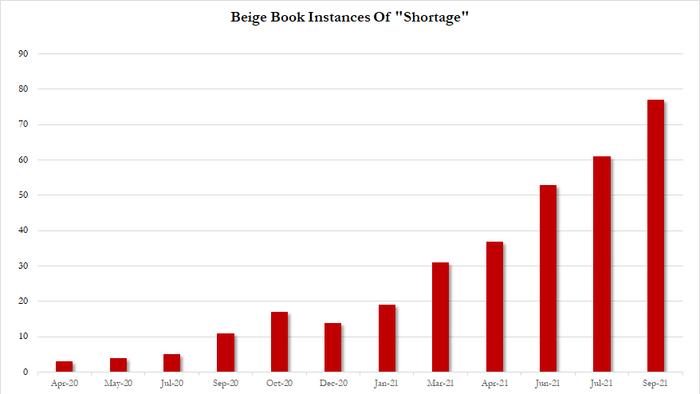 
In a notable reversal in the latest Fed Beige Book, the Sept 8 edition of the Fed’s assessment of the economy found that after the economy “strengthened” from May to July in its last Beige Book, the Sept assessment found that “economic growth downshifted slightly to a moderate pace” (even though the characterization of the pace of job creation ranged from slight to strong) with much of the blame cast on the Delta variant to wit: “the stronger sectors of the economy of late included manufacturing, transportation, non-financial services, and residential real estate. The deceleration in economic activity was largely attributable to a pullback in dining out, travel, and tourism in most Districts, reflecting safety concerns due to the rise of the Delta variant, and, in a few cases, international travel restrictions.”

And whereas back in July the biggest concern was surging prices, two months later a new bogeyman has emerged, it is no longer soaring inflation (the Beige Book notes that “Inflation was reported to be steady at an elevated pace, as half of the Districts characterized the pace of price increases as strong, while half described it as moderate”) that is the biggest risk – although one look at the Prices section below could prompt some doubt here – but rather the same one that citizens of Venezuela and every other socialist paradise on earth are familiar with: unprecedented: widespread shortages of everything.

And between continued surging prices, a downshift in the economy and widespread labor shortages, the one word that summarizes best what is going on is: stagflation.

But before we get there, here are the Fed’s comments on…

Here are the highlights by Regional Fed:

As for the primary driver behind the continued stagflation chaos in the US economy, it is the ongoing supply-chain shock which has led to total confusion in what until recently was a “just in time” economy, resulting in record Beige Book mentions of “shortages” which in September rose to 77, up from 61 in July and a new all time high.