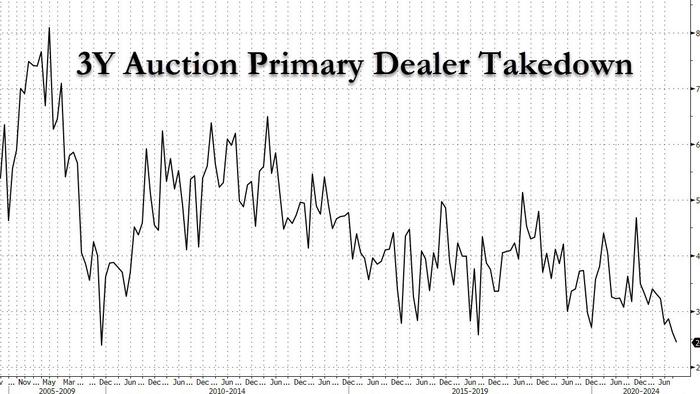 
Another month, another stellar 3Y auction.

One month after we saw a solid jump in foreign demand in the August 3Y auction, which quickly sold $58 billion in three year paper at a high yield that stopped through the When Issued, moments ago the Treasury sold another $58 billion in 3Y notes in what was another solid, well-bid auction.

But while the BTC so average, the foreign bid was stellar, with Indirects taking down a whopping 56.7% of the final allotment; this was the highest Indirect Bid in over a year, going back all the way to August 2020 when the Indirects took down 57.0%. And with Directs also super strong, taking down 18.97% or the most since December 2019, Dealers were left with just 24.4% of the auction, which was the 2nd lowest on record and only higher compared to the 23.9% Dealers ended up holding in November 2009.

Overall, this was a stellar 3Y auction which saw a surge in foreign demand and resulted in a plunge in Dealer takedown (which means the Fed will have problems repurchasing these bonds via POMO in the coming days). In any case, the auction was so strong one can’t see how tomorrow’s 10Y auction would have any problems especially given today’s generous concession which has pushed the yield as high as 1.38%.