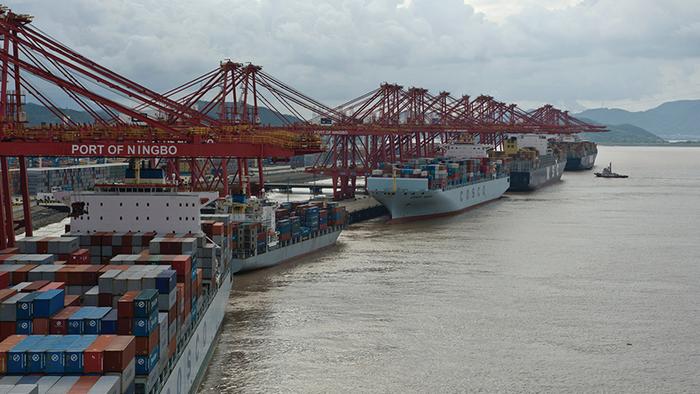 
The Meishan Terminal in Ningbo, China, has officially reopened following a two-week shutdown due to a COVID infection, according to Bloomberg. The shutdown snarled regional ports and major shipping routes between Asia and US West Coast.

On Tuesday, shipping data provided by Bloomberg showed some of the first hints that operations at Meishan were underway though not officially reported by port officials.

The suspension of the terminal was due to a COVID-19 infection that reduced capacity at the port by a quarter, resulting in severe vessel congestion at the terminal and other surrounding ports. We noted this in a recent shipping note titled “China’s Top Port Shuttered For Seventh Day As Congestion Crisis Spreads.”

On Wednesday, Bloomberg quoted a port official saying “resumption of normal operations” is underway at the terminal. The importance of the port is that it’s China’s second-busiest in terms of container throughput.

Congestion and delays at Chinese ports have pushed container prices to record highs. Drewry’s composite World Container index rose 600% in 2020 and another 100% so far this year to near $10,000 per 40-foot box container.

Container costs for top shipping routes have exploded on a post-COVID basis.

What suggested to us that Meishan was “imminently” reopening was a notice by the shipping line CMA CGM SA that said partial operations resumed at the terminal on Aug. 18. Two of the French company’s vessels, Rivoli and the Samson, were recently loaded and departed from the terminal.

Throughput at the port will likely increase in the coming days in stages to whittle down the backlog of containers, with a full resumption of operations by mid-September.

However, increasing throughput at Ningbo could be bad news if departed vessels are headed for the US West Coast due to port congestion.

In other global supply chain news, a cargo terminal at Shanghai’s Pudong International Airport has experienced a virus outbreak and is now disrupting air freight shipments.

Cargo-handling “capacity has been cut by an estimated 80-90%. We anticipate congestion to continue through the week of Aug. 30, with the hopes we can get back to ‘normal’ by early September,” according to Neel Jones Shah, executive vice president at Flexport Inc., a digital freight forwarder. “To keep goods moving, Flexport has been trucking significant quantities of client cargo from Pudong to Hong Kong.”

COVID continues to create kinks in the global supply chain that appear to be more persistent than first thought.