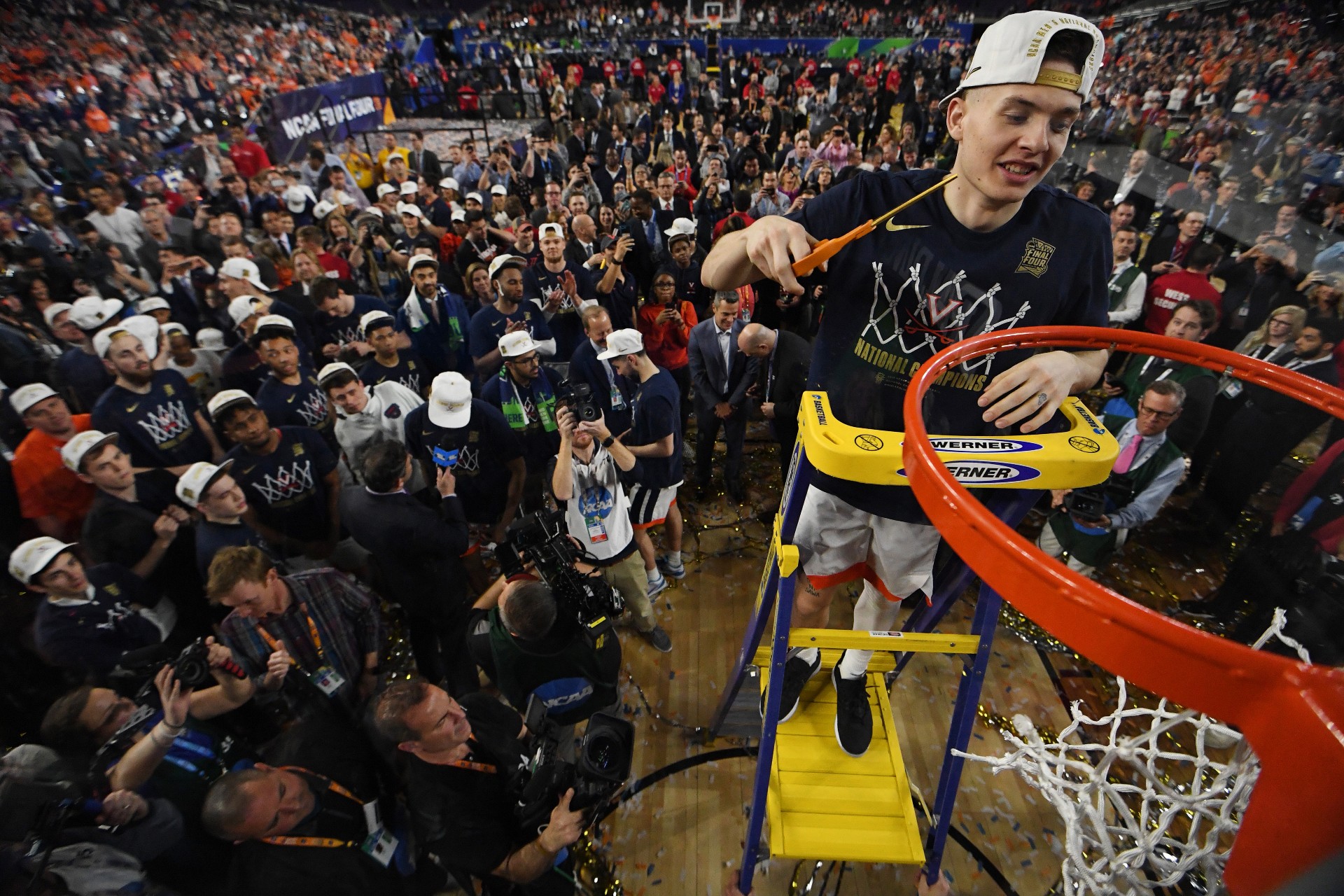 
As we approach the end of a college sports summer that has felt like a combination of a hurricane, tornado and tsunami, those in charge nationally are so vexed about the future they decided to call for a meeting to consider how to cope with everything that happened: the NCAA’s resounding Supreme Court defeat, the introduction of name, image and likeness rights to college athletes, potential expansion of the College Football Playoff and some massively impactful conference maneuvering.

There is no certainty about what solutions those populating the NCAA’s “constitutional convention” in November will pursue, but there have been suggestions from many in college sports. Mike Brey, head men’s basketball coach at Notre Dame, resides in that community and has an idea for the 22 men and women who will gather.

“When they meet to rewrite the NCAA rulebook and everything, OK, let’s start with this: Don’t fool around with the Tournament,” Brey told Sporting News. “We can’t fool with that, but everything else is open.

“We’re going to have all these new rules and guidelines, but they can’t mess up March Madness. That pays all the bills. That’s the one saving grace … I don’t see anybody messing with that format. That is just too golden for both parties. The format, and the Delawares getting in, and Cleveland States and VCUs and George Masons – I don’t see them messing with that in the near future.”

This is the principle concern for Division I men’s college basketball anytime there are large-scale machinations centered around the more lucrative sport of football. The decision in July by the Southeastern Conference to invite Texas and Oklahoma to become members reignited concerns – which first surfaced a decade ago after realignment affected every major conference – about the doomsday scenario all true college basketball fans fear: that the most powerful athletic programs could separate to contest their own championships not just in football, but all sports.

Practically, this may be no more than fodder for radio talk show conversations or empty Twitter debates. But it is something those who work at the highest levels of college athletics have considered, if only to guard against it.

The NCAA men’s basketball championship has a contract with CBS and Turner Sports that runs through 2034 that has paid roughly $770 million to the NCAA, the vast majority of which is then distributed to member schools through performance-related payouts to their conferences, through a student-athlete assistance fund, an academic enhancement fund and another based on the number of sports each school sponsors. The NCAA Tournament television revenue will jump to more than $1 billion as of 2025.

March Madness, though, pulls in many who do not follow the sport religiously, something widely attributed to the unique nature of the competition, which matches established major powers against less well-funded programs that often prevail regardless.

Of the 20 largest sports television audiences for the first half of 2021, the only two that did not involve football were the Baylor-Gonzaga NCAA championship game (16.92 million viewers) and Gonzaga-UCLA Final Four game (14.94 million). No NBA Finals game had an audience of even 13 million. Nine other NCAA Tournament games were among the top 50. Games involving such teams as Loyola Ramblers of the Missouri Valley Conference and Summit League champion Oral Roberts narrowly missed cracking that list.

“Obviously our business is evolving dramatically in terms of NIL and now conference realignment potentially and potentially the restructuring of the NCAA governance system and what the NCAA does or doesn’t do in relation to what happens at the conference or campus level,” NCAA senior vice president of basketball Dan Gavitt told Sporting News. “But in spite of all that evolution, I have a high degree of confidence that the tournament and college basketball will continue to be what we all have known and loved for a long time.

“There’s still access for all 32 conference to the tournament, and while that could change as a result of the constitutional convention, I don’t think it will. It’s too fundamental to Division I, and I don’t sense any lack of support for that inclusion. I personally think it’s a great thing for the tournament, probably the reason why the tournament is so popular.”

March Madness stands as one of the essential reasons why keeping the NCAA intact – despite the damage done by the Supreme Court ruling in the Alston case, the association’s impotence in regulating name, image and likeness and the concerns about the slow pace of the infractions cases that grew from the Justice Department’s examination of the basketball talent game – will be a priority at the NCAA’s constitutional convention.

Although there never is a shortage of theories that eventually the major football schools could form their own association and stage their own basketball tournament and keep all the money, there is every reason to believe even a 1/57th share or 1/76th share of its proceeds – depending on how they might view the Big East and what’s left of the Big 12 – would represent a paycut for all involved.

“You can’t have the excitement, the enthusiasm, the thrill of college athletics without the NCAA basketball tournament,” Georgia Tech men’s basketball coach Josh Pastner told SN. “A lot of things are with football at the forefront, and that’s totally understandable. But I do believe, no matter what happens – even with realignment – in the end, you’re still going to have the basketball tournament.

“Now, the question that comes with that is if you start doing these super conferences, how many teams are going to come out of these conferences? How many games would you play? I think these are some of the questions out there. I do not see the tournament being affected at all.”

With various rule changes affecting the recruiting of future talent and the retention of their current rosters, many coaches are too busy to ponder what the impact of the Texas/Oklahoma separation from the Big 12 Conference will be – even if their school might wind up involved in potential Big 12 survival expansion discussion.

Coaches have concerns about how NIL and governance issues will affect their day-to-day operations. It would be a challenge to find anyone who knows how recruiting will be impacted. Is there an advantage to being in a significant college town where one’s athletic program is the most important entity? Or is it better to be in a larger city with pro sports as competition but more businesses to get involved? It’s much too early to determine whether there is an advantage to either circumstance, given that NIL rights were released to college athletes on July 1.

Coaches already have seen their daily lives dramatically impacted by the introduction of the one-time transfer exemption, approved in April, which permits immediate eligibility for a transfer making a first move in sports where previously athletes were required to serve a “year in residence.” As well, those entering the NBA Draft can hire agent to help them navigate the pre-draft process.

“The ripple effect of this is anti-program building. It’s getting harder and harder to maintain your programs,” Houston coach Kelvin Sampson told SN. “Because almost every year you’re forced to re-evaluate how you want your program to be. Look at the programs that have been traditional for so long all of a sudden change course and become a one-and-done program. They were forced to think about that. Now, you’re not forced to do anything, but they made a decision to do that.

“Conference realignment is the least of our worries. That’s just another thing that’s out there on the horizon, like thunder booming in the distance. You know it’s coming, but you’re not sure how it’s going to affect you.”

The arrival of Oklahoma and Texas will surely change SEC basketball. They’ve made a combined 32 NCAA Tournament appearances over the past two decades, with Oklahoma reaching the Final Four in 2002 and 2016 and Texas getting there in 2004. Each has a new coach that has reached the Final Four elsewhere inside the past five years: Porter Moser with Loyola in 2018 and Chris Beard with Texas Tech in 2019.

The SEC has experienced a resurgence in basketball over the past several years, since the league hired Mike Tranghese as a consultant Dan Leibovitz as associate commissioner, mandated better non-league scheduling and encouraged more effective hiring of coaches. The league placed six of its 14 members into the 2021 NCAA Tournament, having gotten seven to March Madness in 2019 (including Final Four entrant Auburn) and a league-record eight in 2018.

How many of the 16 members the league will be able to send to March Madness is impossible to say. The most any league ever has gotten into the tournament is the 2010-11 Big East, which placed 11 of its 16 members into the field. Since moving to 15 teams in 2013-14, the ACC has produced an average of seven NCAA entrants, including a high of nine in both 2017 and 2018 and a low of six in both 2014 and 2015. So there is room for a deep SEC to earn a large share of the March Madness field, but there is no certainty that will happen.

Which means the Oklahoma/Texas migration will impact them and their league, but not necessarily the whole of college basketball.

“You’ve got a chance to get in the NCAA Tournament and build a legacy for your program, for those kids in your program. I don’t think that’s going to go away. College basketball, we’re like the duck on the middle of the lake. He looks calm and serene on top, but underneath he’s flapping those feet a million miles an hour. Right now, that is college basketball.”