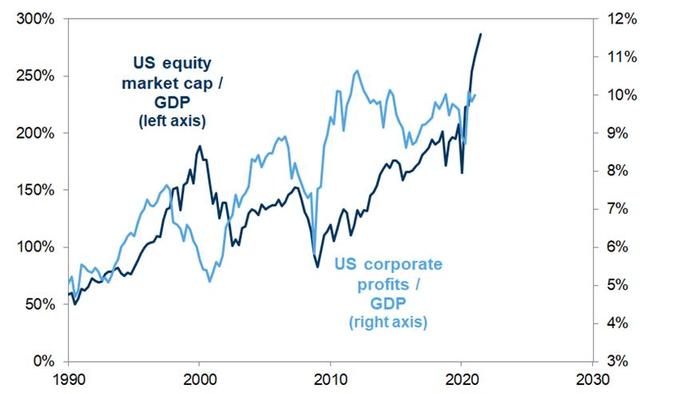 
In his latest note on markets, Goldman’s head of hedge fund sales, Tony Pasquariello, muses on the dog days of summer where “market volumes have receded to their lowest levels of the year and 1-month realized volatility on S&P has leaked into single digits.” And given the lack of tactical action – i.e., the Goldman flow desk is dry as a bone –  Pasquariello,  takes a “step back to think bigger picture on where the markets are headed.”

To do that, the Goldman trader writes that “at the risk of severe over-reduction, here’s one of the most bullish scenarios that I can sketch out for the next year or so … and, one of the most bearish”:

Naturally, working for Goldman Sachs, Pasquariello writes that “in the end, I’m still inclined to “find the freight trains, and get on them.” Where that leads me is to be more positive on NDX than anything else on the board.” Yet even he concedes that this is “not a particularly original thought, and it comes with the admission that nothing is cheap these days and QE has been very friendly for long duration assets.” So, as the Goldman strategist concludes, “with appreciation for the heightened risk from the Fed into Jackson Hole and September FOMC, I’ll meet myself in the middle and advocate for carrying length via calls and call spreads on QQQ.”

Pasquariello then shares a few one-liners from 2013 — a year that brought us the Taper Tantrum and a 32% total return in S&P — with an application to the present day (he adds that “these are not intended to cut in one cohesive direction, but to stimulate some thought on the path ahead (yes, they tilt bullish, but you probably guessed that already”):

A few parting points from the note:

1. Commodities: GIR published a well-reasoned note evaluating the current landscape; to my eye, this is the punch line: “with the macro reflation tailwind rescinding over the past quarter, micro trends are likely to take up an even greater role in commodity pricing dynamics going forward. critically, these micro trends continue to point to ongoing, and in places steepening, commodity inventory declines that should continue to support prices and timespreads in the next 12-18 months”.

2. Japan: part of the bullish call on Japanese equities last fall was predicated on Mr. Suga’s ambitious growth agenda. at last check, things haven’t been going overly well for him. this note from Japanese Economics lays out the election dynamics for the upcoming period: link. the Japan buffs will recall that over the past two decades, the only PMs to establish long-term administrations of more than five years were Koizumi and Abe (second time).

3. Software: it’s been ten years — to the week — since Marc Andreesen penned his seminal op-ed, “Why Software Is Eating The World,” and it’s worth a revisit: link. note the IGV software ETF was trading at $48 back then … last print > 400

5. Corporate Technicals: To underline the prior point, this note from Ben Snider and US Portfolio Strategy is a superb look into supply and demand within the US equity market: link. the most surprising piece to me was, despite the recent boom in new issue, US corporations were still net buyers of stocks in H1:

6. consumer confidence: As you can see in these charts, if you look under the hood of last week’s University of Michigan data, it’s vividly clear that people are not at all happy with the increased cost of cars and housing (credit to Mike Cahill in GIR). I’m not sure exactly what to do with this, but when nearly 70% of your economy is driven by the consumer, I don’t think you can dismiss it out of hand (link). I’d also note that the broad tone on earnings from the big US retailers this week suggests early signs of a potential slowdown.

7. It’s no secret that the ratio of equity market cap to GDP is well above where it stood during the tech bubble (dark blue line). while that needs to be taken seriously, I’d note the ratio of US corporate profits to GDP looks healthy (light blue line):

8. this was the aforementioned 1995 overlay. while I wouldn’t stake my life on these analogs, it’s too good not to reference: