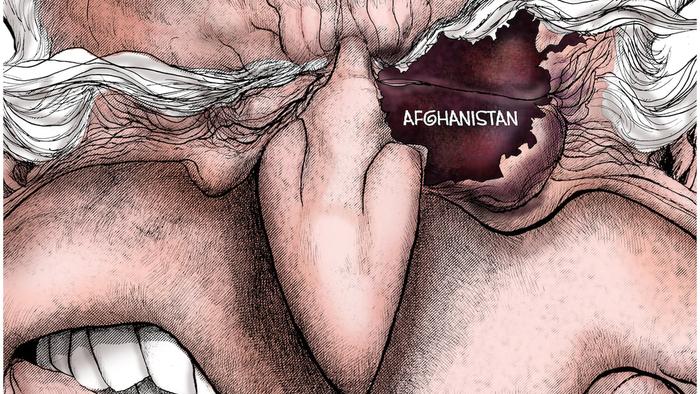 President Joe Biden is “laser focused” on getting Americans who want to leave Afghanistan out of the country, a White House official said Friday.

“He has directed the Department of Defense and the team working on this to use every possibility available to them to increase the number of people that we’re getting out,” Kate Bedingfield, the White House’s communications director, said on CNN’s “New Day.”

And of course, the big question is – will he take any questions?

The Epoch Times’ Zachary Stieber notes that this is the first time he’s addressed the issue since Wednesday, when Biden sat down with ABC host George Stephanopoulos, a former Clinton administration aide, for an interview midweek, but it was not broadcast live and ABC has withheld most footage from the discussion, opting instead to publish a transcript and selected clips.

Biden on Monday delivered a speech on Afghanistan. He primarily defended his decision to pull out U.S. troops and blamed the Trump administration for starting the withdrawal process.

Biden continued that theme with Stephanopoulos, claiming the intelligence community did not say that the Taliban could quickly takeover the country when the United States left.

He also said there was no way to withdraw from Afghanistan without “chaos ensuing.”

The Biden administration is accepting tens of thousands of Afghans fleeing their country. Officials say the Afghans helped the United States during the decades-long war there.

Biden was in Delaware last week. He later went to Camp David, Maryland for vacation. That’s where he was when the Taliban took over Kabul on Sunday. Amid growing cries to address the public on the situation, he traveled to the White House on Monday to deliver the speech.

The president after that speech went back to Camp David.

The following evening, Biden went back to the White House.

Biden did deliver remarks on Wednesday, but focused on the U.S. government’s COVID-19 response. He urged Americans to get a booster COVID-19 shot and denounced Republican governors who are blocking schools from implementing mask mandates.

Biden did not touch on Afghanistan. He did not take questions on Monday or Wednesday. The White House has not held a briefing since Tuesday.

Biden’s frequent travel from Washington has drawn criticism from Republicans, who say it shows poor leadership.

“Americans are stranded in Afghanistan. The Taliban is obstructing Americans trying to get home. President Biden is going on vacation during this crisis. This is pathetic leadership,” Rep. Ken Buck (R-Colo.) said on social media regarding Biden’s Friday flight schedule.

Biden’s team has defended his leadership throughout the disaster in Afghanistan, including White House press secretary Jen Psaki, who cut her own vacation short after the Taliban takeover.

“He’s taking responsibility for every decision the United States government took with respect to Afghanistan, because, as he said, the buck stops with him,” national security adviser Jake Sullivan told reporters this week.

“Now, at the same time, that doesn’t change the fact that there are other parties here responsible as well who have taken actions and decisions that helped lead us to where we are. So, from our perspective, what we have to do now is focus on the task at hand, the mission at hand,” he added.

Pantera CEO bullish on DeFi, Web3 and NFTs as Token2049 gets underway