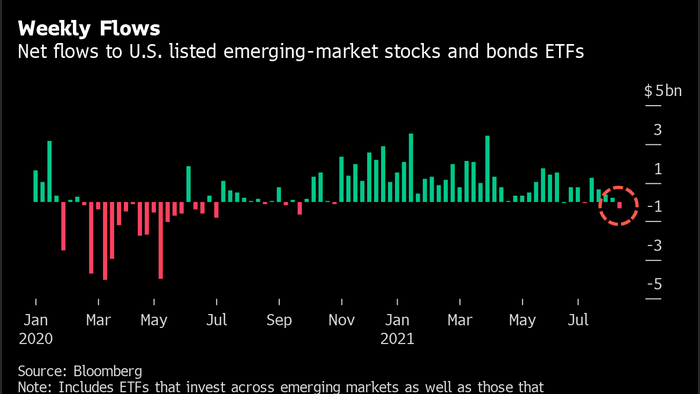 
“I think that the rotation from emerging markets to Western markets could continue in the near-term,” David Chao, Global Market Strategist, at Invesco, recently said.

With Chao’s EM to DM rotation in mind, Bloomberg data shows EM exchange-traded funds had the most money pulled out last week in 11 months, thanks to mounting Brazilian political and economic risks.

Bloomberg data also showed withdraws from funds that invest in EM stocks and bonds were about $345.4 million last week, compared with a gain of $189.7 million the previous week.

iShares MSCI Brazil, or EWZ, may experience the third month of outflow after investors withdrew $131.8 million last week. Shares of the ETF have tumbled into a correction since peaking in late June, down 13% to $36.49 on Monday, hitting levels not seen since May.

Besides a political firestorm, investors are also concerned about the country’s central bank’s full percentage point rate hike next month that could damage sentiment in the local markets.

Some investors, such as Carlos Botelho, chief investment officer at Limiar Capital Management in Arlington, Virginia, said rate hikes are leading to a fixed-income rotation. He said investors are bracing for “a bout of risk-off ahead of the start of Fed taper.”

…and $852B in the last 41 weeks since positive vaccine developments.

Meanwhile, EM ETF EEM is negatively diverging the rest of the world.

Could emerging market outflows be the first warning sign that the global rally in stocks is beginning to lose momentum?