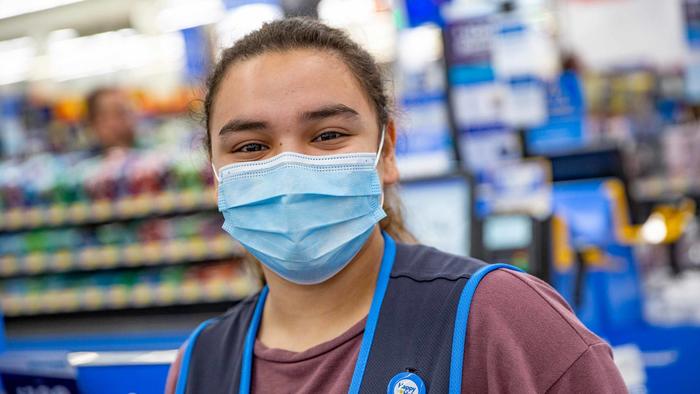 
The post-covid spending spree may be fading but it’s still going strong at places such as Walmart which just posted another whopper of a quarter, where it beat on everything from revenue to comp stores to EPS, and boosted its quarterly and full year guidance.

First, here are the Q2 results:

Walmart reported that in YTD it repurchased $5.2BN in stock and paid out $3.1BN in dividends after generating $12.4BN in operating cash flow and spending $5.0BN on CapEx, resulting in $7.4BN in FCF. This means that the company returned more to shareholders in Q2 than it generated. Also of note: operating cash flow dropped sharply, sliding by $6.5BN to $12.4BN for the six months ended June 30; the retailer also generated YTD free cash flow of $7.4 billion which decreased when compared to $15.4 billion for the six months ended July 2020. It attributed that to needing to purchase more inventory; this may be the reason why the shares are not happy in the premarket session.

In a reversal from much of 2020 when the bulk of comp store growth was driven by a much higher average ticket as consumer shopped less frequently but bought more, in Q2 the average ticket actually declined -0.8% but the number of transactions increased a whopping 6.1% as Americans visited their neighborhood Walmart more often, resulting in US comp store sales of 5.2%.

Some investors may be fretting that even beating expectations, the 5.2% same store sales are not enough, coming at the lowest level since the covid pandemic began.

Heading into this earnings release some analysts were skeptical doubting that the company could sustain its recent momentum, especially now that stimulus checks are spent and year-on-year comparisons are getting harder, but its results show the American consumer is still going pretty strong, nearly a year and a half into this pandemic.

More importantly, that is going to continue, albeit at a somewhat more muted pace, with the company guiding higher, and now expects US same stores comparable sales ex-gas for the full year up 5%-6%, up from its prior view of rising low single digits; the guidance beat the average analyst estimate of 3.22%.

Here is the new higher guidance:

In an interview, Walmart CFO Brett Biggs said the raise in annual sales guidance was driven by the first half being better than expected and more confidence in the final two quarters of the year.

“We feel pretty good about the back half,” Biggs said. “That’s influenced by a good start to the year and a good start to the quarter and back to school. It feels like we’ll see continued spending by consumers for the next few months. We’re optimistic about what we’re seeing.”

Walmart also said its outlook doesn’t include any significant additional government aid for the rest of the year. But second-quarter results may already show the impact of the new child tax credits. The first batch of checks worth $15 billion reached about 35 million families on July 15 — and 86% were sent to direct deposit, according to the IRS.  Food insufficiency in households with kids dropped quickly after the checks arrived, according to recent Census Bureau surveys. It’s a sign that at least part of the money was spent at Walmart and the likes.

The company also released some interesting insights on what has been selling. Clothing and travel related categories, as well as beauty, are all doing well. Those are clearly associated with reopening. No sign of consumers switching back into pandemic products yet. But some lasting legacies: Walmart customers are still spending on their pets.

So despite a bevy of strong topline numbers, and stronger than expected guidance, the stock has dipped premarket, as investors may be digging into the deeper results, focusing on such items as the slowdown in comp sales or the sharp drop in free cash flow, which declined pretty sharply. Also souring investor tastes: Walmart’s e-commerce sales in the U.S. grew only 6% in the second quarter, down from 37% in Q1. Finally, Walmart mentioned increased supply chain costs and investments in wages, marketing and tech expenses. However, as Bloomberg notes, these rising costs won’t be unique to the world’s largest retailer. Supply chains and labor markets are still disrupted for basically everyone, everywhere.

The company’s full Q2 presentation is below